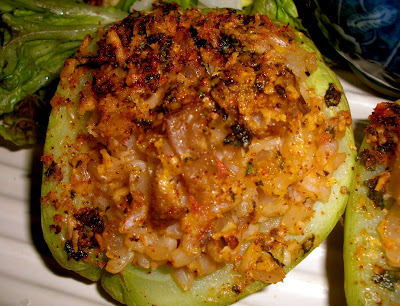 The chayote squash is a squash I am recently beginning to enjoy. The chayote is an edible plant in the gourd family, (along with cucumber, melon and squash), and is grown all over the world including Hawaii. The flesh is crisp and the flavor is pretty mild and it is can be eaten raw, in salads or soups and grilled or baked. 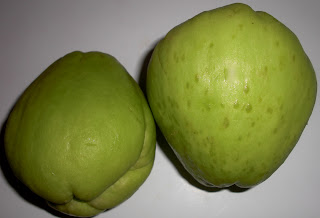 There is something about the chayote squash that makes me hum the songs from Little Shop of Horrors.  Is it just me or does my little friend kind of resemble a young Audrey II?  Can't you just hear it saying; "Feed me Seymour!" 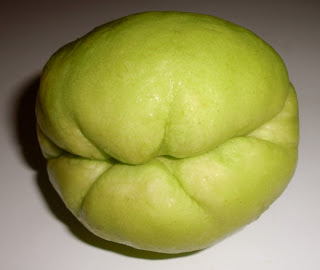 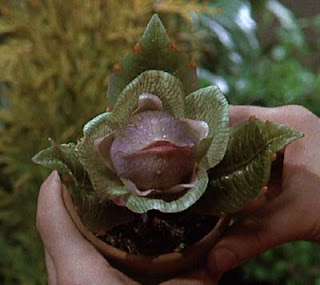 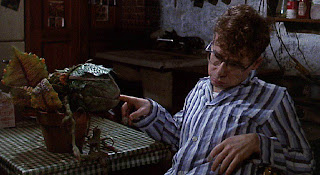 I have mostly eaten chayote raw in a slaw or as part of a salad but I happened to see this recipe for Stuffed Chayote with Mushroom and Tomato and thought it looked good. The recipe is from a cookbook that I picked up at a library book sale earlier in the year: Eating Well in Hawaii by Patricia Salvador, Alfred Salvador, Jr., & Joannie Dobbs. The book focuses on lower-fat, lower-cholesterol recipes and has both local-style and mainstream recipes. 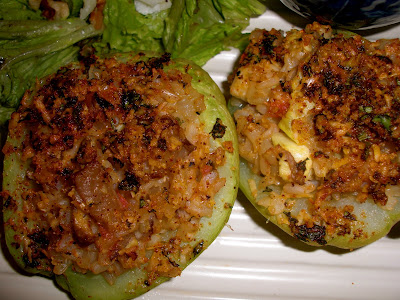 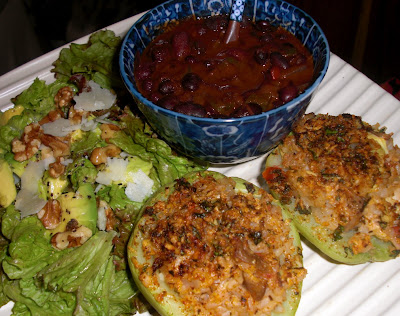 Notes/Results:  Very good. The squash are light and healthy but with good flavor. My chayote squash were much smaller than called for in the recipe, so I cut the amount of the filling down. I subbed out leftover brown rice for the white rice and olive oil for the butter. This was also a great recipe to use up some leftover artichoke hearts and tomatoes I had from my swordfish recipe, as well as the oyster mushrooms from my CSA box. I served the chayotes (two since they were so small with only about 1/3-1/2 cup of the filling in each) with a simple green salad with avocado and chopped walnut dressed with lime juice, olive oil and black pepper and a scoop of leftover black beans.  The stuffing would be great in any kind of squash or a bell pepper so I will make this again.
Posted by Deb in Hawaii at 2:17 PM