Someday I will actually get my Cook the Books Club post up before the deadline day, rather than posting it the day of the deadline. I got big dreams! 😉This month our book club pick is Gabrielle Hamilton's foodie memoir Blood, Bones & Butter, hosted by Simona of briciole. 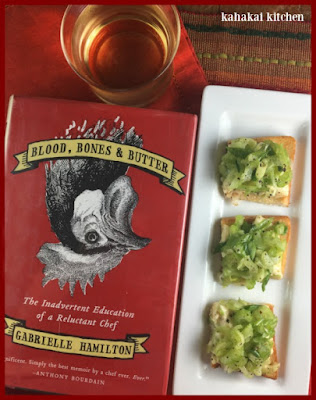 I knew of Gabrielle Hamilton from her appearances on Mind of a Chef and contributions to the New York Times and I had thumbed through her cookbook, Prune, when it first came out but I didn’t know her well so Butter, Bones & Blood which follow her through her life from childhood to marriage and family and of course her time in catering and restaurants and her opening of Prune—named after her childhood nickname from her mother with whom she has a contentious relationship. I admire Hamilton’s strength and resilience—much needed in the tough, male-dominated industry and her no-nonsense attitude. She is very honest throughout the book and I found myself wanting to go eat at her restaurant but not necessarily wanting to hang out with her or work with her as her temper and leftover childhood baggage often seem to get the best of her. Still her stories, descriptive writing  and appreciation for good food and the craft of cooking make for an entertaining memoir that although a bit uneven in places, had me readily following along on her journey. 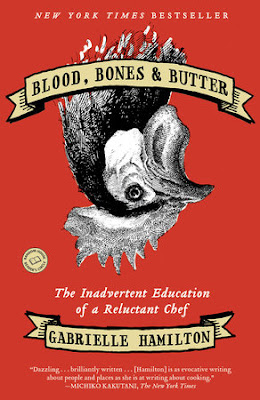 For my book inspired dish, I was going to check out Prune from my local library, but I couldn’t get it in time. Instead I looked up some of Hamilton’s recipes from the New York Times. There were three I especially wanted to try; a pungent salad dressing, baked fennel with cream and Parmesan, and a pupu of celery toasts. 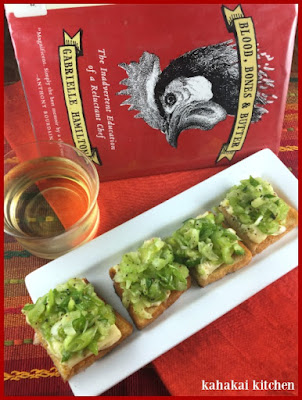 Due to the humid weather making me not want to cook a lick lately, I went for the celery toasts. They sounded fun, and retro and perfect with a glass of wine. Plus, I didn't want to make/use blood or bones in a recipe so that left butter. from the book's title.😉 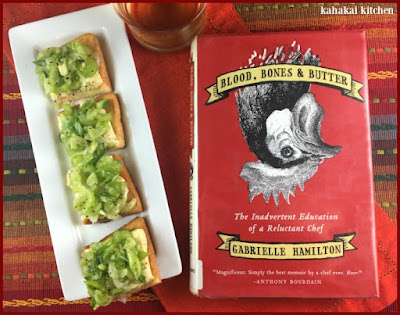 The New York Times says, "This was the first recipe that the chef and writer Gabrielle Hamilton brought to The Times as an Eat columnist for the Sunday magazine in 2016, a snack-tray-sandwich version of a celery-and-fennel salad served at her restaurant, Prune, in the East Village. It calls for thick, white toasted Pullman bread spread wall to wall with unsalted butter, with slices of blue cheese neatly laid on top, below a mound of shaved celery and thinly sliced scallions dressed in garlic, olive oil, lemon juice and salt, and the whole shebang dusted in ground black pepper before being cut in halves or quarters. "The ingredients come from the grocery store," she wrote in her column. "These toasts are not expensive or intimidating, but they are outstanding." 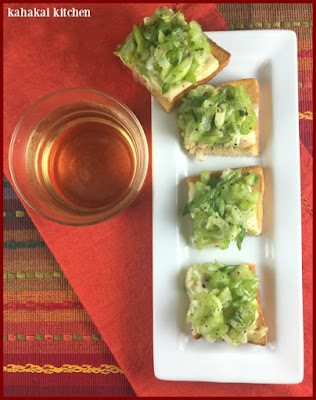 In a small bowl, stir together the celery and the scallions. Microplane the garlic into the celery mixture.

Mound the shaved celery salad evenly on top of the blue-cheese toasts, and grind black pepper over them very generously. Cut each in half or quarters. 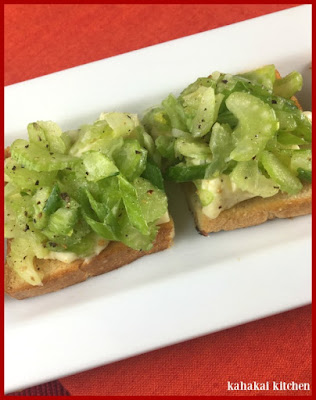 Notes/Results: I thought that I would like these based on the ingredients list alone as I like celery and love blue cheese, toast with butter, lemon and garlic but I wasn’t prepared for how good these little toasts are. I tasted the celery salad and thought that I should have lessened the garlic as it was pretty sharp and pungent but when it was on top of the toasts with the butter and Cambozola triple-cream blue cheese, it was perfect—assertive yet  balanced by the other ingredients. . Just a great blend of flavors and the soft-crisp-crunchy combination of textures make it really addicting. The Cambozola is just the right amount of creamy and not overpowering in flavor. They paired well with a glass of crisp white wine, they made a perfect pre-dinner appetizer, or if you are me, just dinner.  I will definitely make them again. 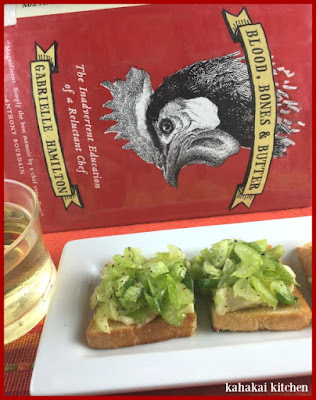 Linking up Blood, Bones & Butter to July's Foodies Read. You can check out the July Foodies Read linkup, hosted by Heather at Based on a True Story, to see what everyone is reading this month.

Finally, these min open-faced sandwiches are being shared with Souper (Soup, Salad & Sammie) Sundays right here at Kahakai Kitchen. Anyone with a soup, salad or sandwich is welcome to join in. Details on how to participate are on this week's post.

Well of course the deadline for this pick is today, Wednesday July 31st but if you missed it and you like food, books, and foodie books you should join us for August/September when we will be reading The Food Explorer: The True Adventures of the Globe-Trotting Botanist Who Transformed the Way America Eats by Daniel Stone, hosted by yours truly here at Kahakai Kitchen.