So this wasn't the recipe I intended to cook for this round of Cook the Books, our virtual foodie book club, but I got behind in my reading, life and work got in my way and then I caught what I think is a doozy of a cold or sinus infection and have been laid up all weekend. So I decided that my Singapore Street Noodle ingredients, were going to morph into a soup, but curry and noodles just didn't sound good this morning. What did? A simple and restorative Chinese Egg Drop Soup with Shrimp. 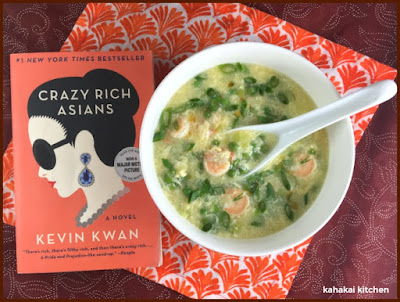 I had been meaning to read Crazy Rich Asians so I was pleased when my fellow Hawaii co-host Claudia of Honey From Rock selected it. (See her announcement here.) I saw the movie before the book (but missed the tie-in with Food & Flix) and wanted to see if I enjoyed the book as much. I did enjoy it, but the fun and vibrant film won me over more. the movie streamlined the many family members and plot lines and was easier to digest and you could see all of the food and clothes and wealthy excess rather than read about it. On the other hand, the film does cut a lot out and I appreciated Kevin Kwan's detailed footnotes about the slang, descriptions of the dishes, etc. Although I didn't hang out in most of the elite places he mentions, he does bring the city to life and brought me back to the times I spent there. The time spent on the settings at times overshadows the character development. I wanted a more complete ending in the book too, but since it's a trilogy, I guess I will need to read the other two books to get more detail on what happens next with Rachel and Nick. 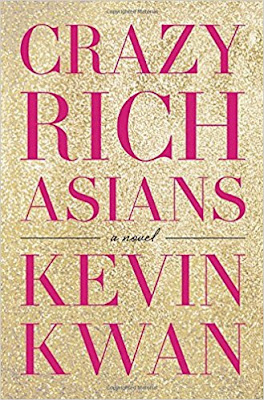 There was so much good food in Crazy Rich Asians--it definitely sent me back to my days of traveling there for work and eating at the hawker stalls and great little cafes and coffee shops there. As mentioned, my dish is not Singaporean, but nothing says comfort like egg drop soup and I have a feeling that Rachel's mom might have made her a bowl or two when she needed it. 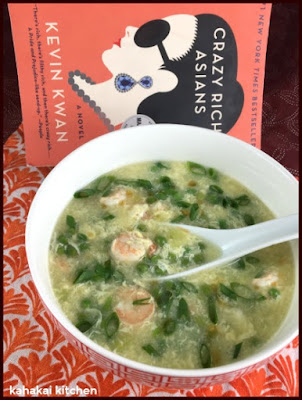 For my recipe, I looked on line but ultimately just kept the bones of most of the recipes I tried and just threw together what I wanted. That is the beauty of this soup--good broth, eggs and whatever you have on hand--like shrimp and peas that were going into my noodles. Easy and low effort and much better and less salty than the kind from your local Chinese restaurant.

Combine the onions, ginger and stock and bring to a boil in a large soup pan over a high heat. Reduce heat to low and simmer about 10 minutes.

Make a slurry with the cornstarch, salt, pepper and 2 Tbsp water in a small bowl, whisking well until the cornstarch is dissolved. Stir the slurry into the soup, stirring with a slotted spoon. Add peas and shrimp to the soup and cook about 2 minutes.

Beat eggs together well in a small bowl. Using a fork across the lips of the bowl, slowly pour egg through. Let the eggs set for a few minutes, then break them apart into the desired size pieces--you can use a fork or chopstick to break apart the eggs.

Ladle into bowls and top with the sliced green onions and a drizzle of toasted sesame oil and/or chili oil if desired. 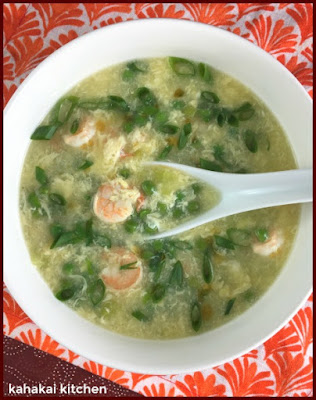 Notes/Results: This soup hit the spot today as my head and sinuses are pounding and I needed something simple and soothing. It is velvety and rich and I liked the sweeter bites of shrimp and peas, mixed in the savory broth. I tend to order egg drop soup in Chinese restaurants as it reminds me of family dinners at a very Americanized Chinese restaurant in Portland that my mom and dad loved. I forget how easy it is to make this fridge/pantry soup at home and I will definitely make it again. 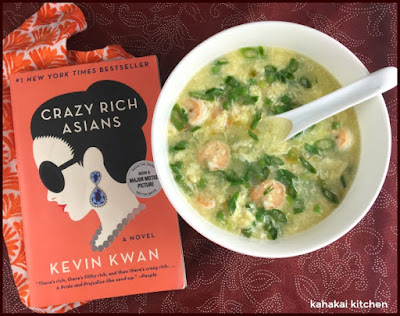 The deadline for this round of CTB is tody, March 31st and Claudia be rounding up the entries on the Cook the Books site soon after. If you missed this round and like food, books, and foodie books, join us for February/March when we'll be reading Buttermilk Graffiti, hosted by Debra of Eliot's Eats.

Since we are on a soup kick and this was our last week cooking with Ruth Reichl at I Heart Cooking Clubs, and I didn't get a chance to make a dish to say Goodbye Ruth with, here are five great soups I cooked with her: 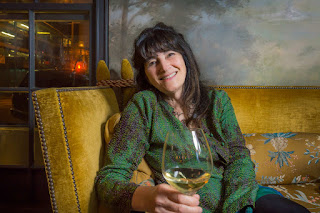 First, so good I made it twice, her Avgolemono Soup: 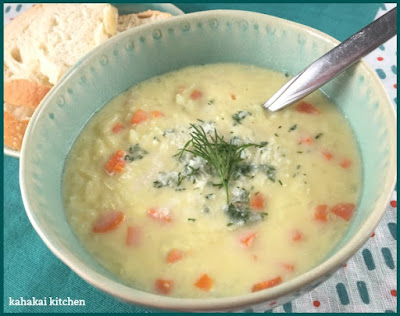 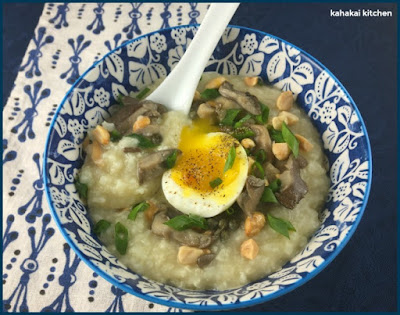 The retro Cream of Watercress Soup 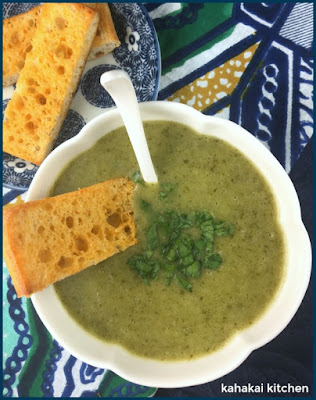 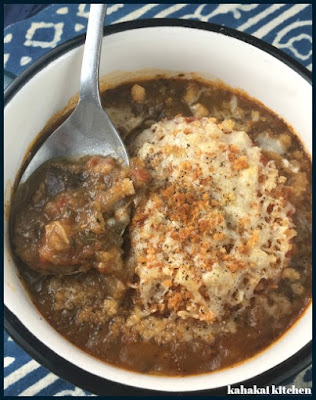 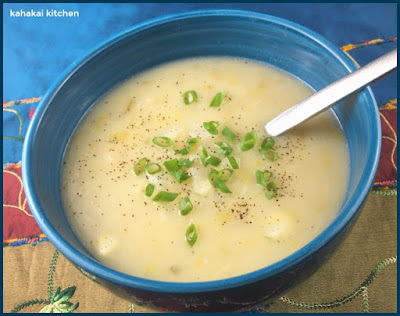 It was a delicious six months! I look forward to cooking more with Ruth and all of our past featured chefs at IHCC when we celebrate our Ten-Year: All Chefs Edition. Hope you join in the fun!

And, last but not least, we have one guest in the Souper Sunday kitchen this week, let's see what she brought...

Angela of Mean Green Chef shares Robust Cabbage Soup and says, "Healthy Robust Cabbage Soup, a full-flavored bowl that’s healthy and light. Super easy to prepare and totally versatile you can add more veg or even some roasted chicken if you want to! You’ve probably seen a lot of cabbage soup recipes for weight loss due to the fact its low calorie. Which is a great benefit, but we also love the full-on taste from sauteing which really helps to develop a serious punch of flavor!"

Thanks for joining in, Angela!

(If you aren't familiar with Souper Sundays, you can read about of the origins of it here.
If you would like to join in Souper (Soup, Salad, and Sammie) Sundays, I would love to have you! Here's how...

The Book Tour Stops Here: A Review of "Within These Lines" by Stephanie Morrill, Served with a Recipe for Grilled Eggplant with Orange-Miso Sauce

I am very excited to be today's stop on the TLC Book Tour for Within These Lines by Stephanie Morrill, a touching and absorbing young adult World War II novel. Accompanying my review is a recipe inspired by my reading, Grilled Eggplant with Orange-Miso Sauce. 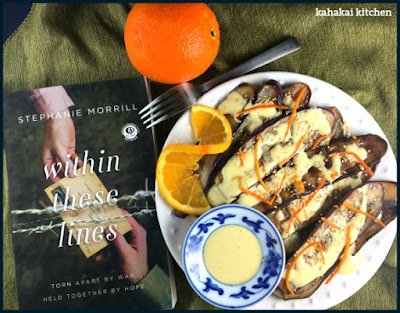 From Stephanie Morrill, author of The Lost Girl of Astor Street, comes Within These Lines, the love story of a girl and boy torn apart by racism during World War II.

Evalina Cassano’s life in an Italian-American family living in San Francisco in 1941 is quiet and ordinary until she falls in love with Taichi Hamasaki, the son of Japanese immigrants. Despite the scandal it would cause and that inter-racial marriage is illegal in California, Evalina and Taichi vow they will find a way to be together. But anti-Japanese feelings erupt across the country after the attack on Pearl Harbor, and Taichi and his family are forced to give up their farm and move to an internment camp.

Degrading treatment makes life at Manzanar Relocation Center difficult. Taichi’s only connection to the outside world is treasured letters from Evalina. Feeling that the only action she can take to help Taichi is to speak out against injustice, Evalina becomes increasingly vocal at school and at home.

Meanwhile, inside Manzanar, fighting between different Japanese-American factions arises. Taichi begins to doubt he will ever leave the camp alive.
With tensions running high and their freedom on the line, Evalina and Taichi must hold true to their ideals and believe in their love to make a way back to each other against unbelievable odds. 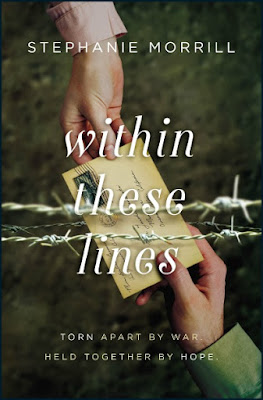 I think it took me all of 30 seconds to sign up for this tour when I saw the email about it. If you ever read my reviews, you know that World War II historical fiction is a passion of mine and the mention of the Manzanar Relocation Center made me think of Farewell to Manzanar by Jeanne Wakatsuki Houston and James D. Houston, one of my favorite young adult memoirs. Starting in junior high, I checked that book out regularly for years until I bought my own copy. Several years ago I was thinking of it again and bought myself another copy (mine long since gone) at the library bookstore. The sheer horror of the U.S. government interning Japanese Americans in internment camp with Executive Order 9066 is something that pains me and our recent political climate makes the mistakes from the past chillingly relevant today. Although Within These Lines is a novel, it is based on fact, and Taichi and the Hamasaki’s experiences in the internment camps are gripping and moving.

The heart of the story is the relationship between Evalina and Taichi, in a hidden relationship already when the Japanese attack Pearl Harbor on December 7. 1941. The book starts three months after the attack, when anger at the Japanese is erupting and the government begins the process of moving families of Japanese descent to the camps. Evalina, an Italian-American and Taichi, a Japanese-American would have faced challenges even before the war, with most states having miscegenation laws prohibiting marriage between different races, but after the attack the odds seem insurmountable. Although a romance, the book is really about the characters and their personal growth—particularly Evalina, as she begins to find her voice. It is poignant and had me tearing up a few times, but there is hope in the pages too.

Within These Lines is well researched and well written, with the mostly fictional characters seamlessly blending with actual people interned at Manzanar. Stephanie Morrill wrote so vividly that I felt like I could see Manzanar and feel the intense winds and grit of the constantly blowing sand. Northern California during the WWII era comes alive too, and I could feel the desperation of the characters and the anger and bigotry against them by so many, as well as the hearts of those who tried to help them. Although written primarily for young adults, it’s a novel equally appropriate for adults. My only complaint is that the ending felt a bit rushed and I wanted to know more about the characters—main and supporting and learn more details about their lives after the war. Morrill writes in the afterword about her research and her inspiration for the book and that gave me more books to explore on this important part of our history that should be remembered and never repeated.