You either love lamb or you don't.  I am a lamb lover, especially a good, falling off the bone lamb shank but I don't cook them at home very often. When I saw some some nice looking shanks at Safeway for a ridiculously good price, I had to throw them in my shopping basket. Upon closer inspection, I saw they were marked "pork shank" on the price label so I started to feel guilty and showed them to the meat guy who told me to take what I wanted because that was what the were marked and he would re-mark the rest.  Six lamb shanks later I had to decide what to do with them and was torn between a recipe from Bobby Flay and one from Tyler Florence.  Of course, with Tyler Florence Fridays looming on the horizon, Tyler's recipe for Lamb Shank Stew with Russet Potato Top from Stirring The Pot won out. 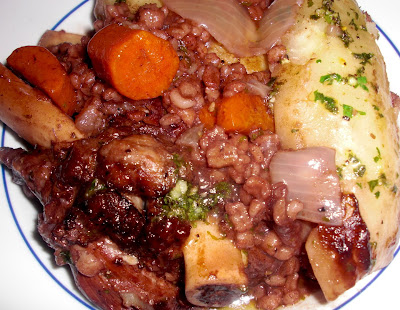 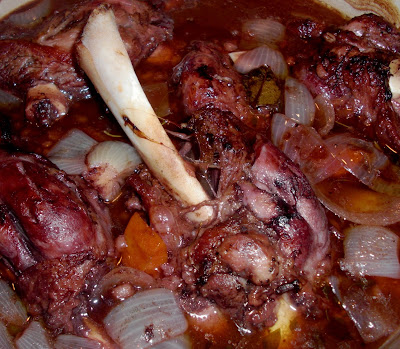 For the Garlic-Parsley Butter, in a bowl combine butter with parsley and garlic; season with salt and pepper and stir to mix.  Set aside. 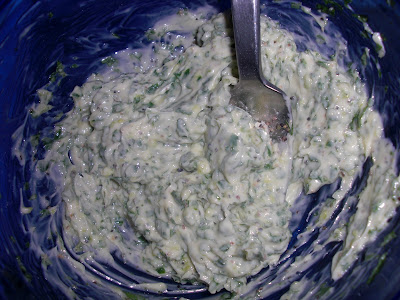 Peel the potatoes and cut in half lengthwise.  After the stew has been braising for 2 hours, remove from oven and arrange potatoes on top to completely cover the stew (you may have to cut some of the potato pieces smaller to fit). 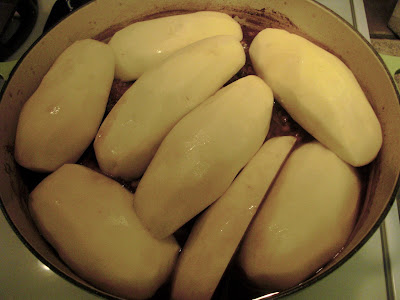 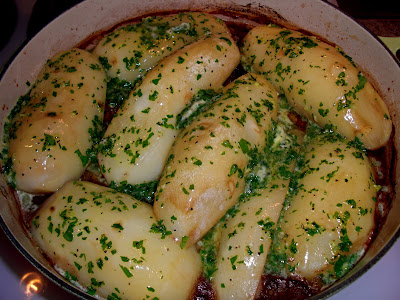 Notes/Results:  I made this recipe as written with the exception being that my shanks were whole and not cut in half.  This doesn't make a big difference other than it is easier to maneuver the smaller pieces and it is a bit less photogenic with the whole shanks.  Overall, this recipe was just OK for me, it was good but not great. The lamb shanks were cooked well, very tender and the flavor was good.  The barley was a nice touch, and provided some starch so all that was needed was a salad and some crusty bread to mop up the liquid. Surprisingly it was the potatoes that I didn't like so much.  The garlic-parsley compound butter was a little bit of heaven and I would make it again for potatoes, noodles or bread but having the potatoes on top of the stew just made them kind of dried out.  The recipe says to cook them for 30 minutes, then baste with the butter and cook another 30 minutes; but the first 30 minutes dried them out.  If I make it again, I would probably omit the potatoes or just boil them, toss them with the parsley butter and serve them alongside the stew. This is a VERY hearty dish--I agree with Tyler that it would be best on a cold day.  So not a bad recipe, just not my favorite Tyler dish so far (Honestly, I was kind of wishing I had gone with Bobby Flay's shank recipe instead); but we learn by trying so I am glad I made it. 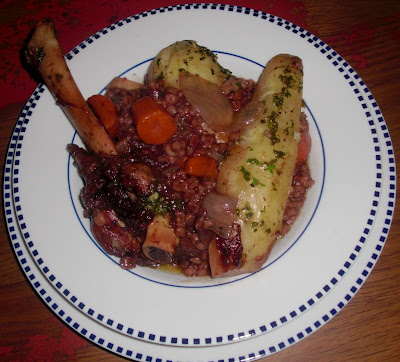 You can check out the other Tyler Florence Friday bloggers and see what they created this week here at the TFF site.  If you are a Tyler fan or want to try some of his recipes, consider joining us on Fridays--details are on the TFF site.
Happy Weekend!
Posted by Deb in Hawaii at 12:01 AM