The Book Tour Stops Here: A Review of "The Alice Network" by Kate Quinn, Served with an Herbed Goat Cheese & Veggie Baguette Sandwich

I'm so excited to be on the TLC Book Tour for The Alice Network by Kate Quinn, a wonderful new historical fiction book about two women of different generations and the amazing female espionage agents in the first World War. I devoured this book--not wanting to put it down-- and then I devoured this Herbed Goat Cheese and Veggie Baguette, inspired by my reading. 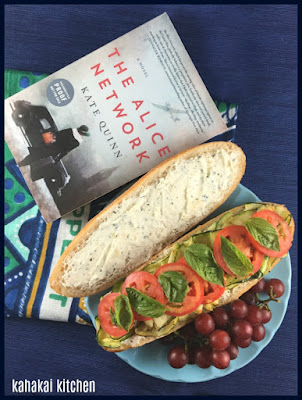 In an enthralling new historical novel from national bestselling author Kate Quinn, two women—a female spy recruited to the real-life Alice Network in France during World War I and an unconventional American socialite searching for her cousin in 1947—are brought together in a mesmerizing story of courage and redemption.

1947. In the chaotic aftermath of World War II, American college girl Charlie St. Clair is pregnant, unmarried, and on the verge of being thrown out of her very proper family. She’s also nursing a desperate hope that her beloved cousin Rose, who disappeared in Nazi-occupied France during the war, might still be alive. So when Charlie’s parents banish her to Europe to have her “little problem” taken care of, Charlie breaks free and heads to London, determined to find out what happened to the cousin she loves like a sister.

1915. A year into the Great War, Eve Gardiner burns to join the fight against the Germans and unexpectedly gets her chance when she’s recruited to work as a spy. Sent into enemy-occupied France, she’s trained by the mesmerizing Lili, the “Queen of Spies”, who manages a vast network of secret agents right under the enemy’s nose.
Thirty years later, haunted by the betrayal that ultimately tore apart the Alice Network, Eve spends her days drunk and secluded in her crumbling London house. Until a young American barges in uttering a name Eve hasn’t heard in decades, and launches them both on a mission to find the truth…no matter where it leads. 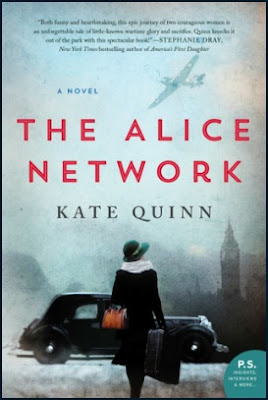 I really loved this book--so much so that the 500+ pages flew by, I stayed up late reading it during a busy week and I didn't want to put it down when I had to work or take care of adult life stuff. The Alice Network turned out to be a 5 star read for me--it's a skillful blend of real life--people and events with well-drawn fictional characters that brought the story to life.

I love historical fiction, especially when it is set in World War I or World War II. I also love war-time historicals that give me a different insight or perspective and The Alice Network did just that. Although I knew about and have read and seen bits and pieces about female intelligence agents and spy networks during the wars, I was not familiar with the real-life heroine Louise de Bettignies and The Alice Network, the spy ring that she led. (There is a great afterward with details about the history and further reading suggestions and I found myself googling for historical details several times throughout and after my reading.) Kate Quinn did an amazing job in using de Bettignies's story (Alice Dubois was one of her pseudonyms) as the core of her novel while creating two strong female leads in Eve Gardiner, a young recruit sent into a spy network in France in 1915, and Charlotte (Charlie) St. Cloud, an American college student looking for her missing French cousin in 1947 where their paths intertwine. Both characters are complex, somewhat lost, feel real, and are easy to root for and the supporting characters are also interesting and nuanced. Being a wartime novel, you know things are not going to end well for everyone, so being so vested in these characters was fairly nerve-wracking as I was biting my nails any time there was the scent of danger in the air. (My right hand is not pretty!) The two stories intertwine well as the book goes back and forth between the time periods and it was interesting to look at the similarities and differences of France during the thick of WW1 and right after the end of WW2. Quinn writes with enough detail to put you right into the setting, while not bogging down the story or the action.

If you love historical fiction, you will love this book. If you think historical fiction is boring, I still think you will love this book as it reads just as much as a suspense novel as it does as a historical. If you like books with strong female characters and relationships, you will love this book. The Alice Network is gripping, intriguing and really well done. My only complaint--I wanted more time with these characters. This is my first Kate Quinn book and although her other books are set in time periods (Italian Renaissance and First-Century Rome) that I normally don't read much of, I will definitely be checking them out. If they are anything close to as good as The Alice Network, they are winners.

Highly recommended--one of my favorites this year.

Author Notes: Kate Quinn is a native of Southern California. She attended Boston University, where she earned bachelor’s and master’s degrees in classical voice. A lifelong history buff, she has written four novels in the Empress of Rome Saga and two books set in the Italian Renaissance detailing the early years of the infamous Borgia clan. All have been translated into multiple languages. She and her husband now live in Maryland with two black dogs named Caesar and Calpurnia. 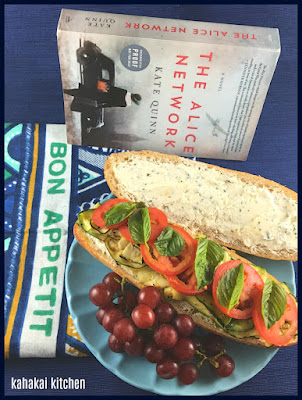 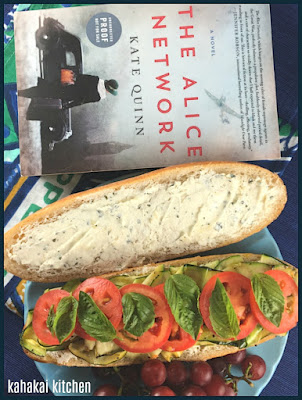 Since both sandwiches and baguettes were mentioned several times, I decided to make a sandwich for my book-inspired dish. There was one described as "thick sandwiches of goat cheese and prosciutto" and another of soft goat cheese and marbled ham, I was on board with the soft goat cheese, but since I don't eat meat, I decided to fill my sandwich with zucchini, sauteed in lemon-pepper and olive oil, sliced Roma tomatoes, and fresh basil leaves. I also wanted to make an herbed goat cheese to make my sandwich pop with flavor. 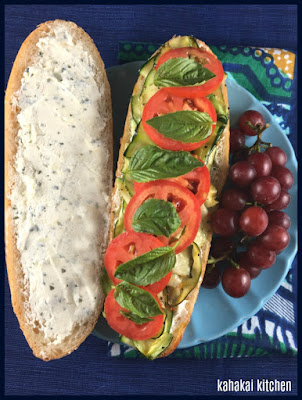 Mix all ingredients together in a small bowl, stirring until the herbs and zest are well mixed into the goat cheese.

Place into serving bowl, cover and refrigerate until ready to use. Serve with bread or crackers or use as a sandwich spread.

To assemble sandwich: Use a mini baguette or length of a regular baguette, split. Spread both pieces of the bread with a thin layer of the herbed goat cheese spread.

Slice zucchini into ribbons with a spiralizer or a vegetable peeler. Saute in olive oil, a pinch of sea salt and a generous sprinkle of lemon pepper until soft and starting to brown. Slice tomatoes, thinly, and separate 5-7 basil leaves. 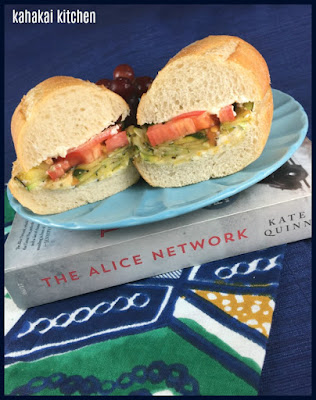 Notes/Results: This is such a delicious sandwich that tastes of summer and has a ton of flavor. Spreading the herbed goat cheese on both the top and bottom baguette may seem like overkill but it's a thin layer, it tastes so good, and it helps hold all of the ingredients together. Since the sauteed zucchini and the tomatoes are so juicy, no butter or mayo is needed for moistness. I served the sandwich with grapes for sweetness, but if you wanted, you could add some apple or even plum slices to the sandwich itself. I did get hungry for bacon and other cured meats reading the book but this meatless sandwich had enough delicious flavor to satisfy me. I would happily make it again.(And since I have leftover herbed goat cheese, I probably will.) ;-) 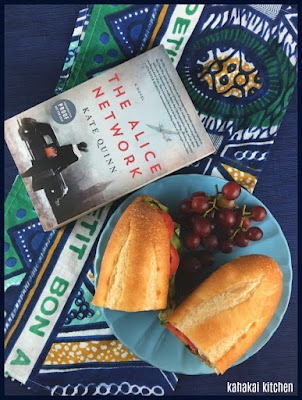 I am also sharing it with Novel Foods #30, an event celebrating food inspired by the written word and hosted by my friend Simona at Briciole. This deadline for this round of Novel Food ends Friday July 7th.

Finally, I'm linking up this tasty sandwich to Souper Sundays, hosted here at Kahakai Kitchen. Each Sunday we feature delicious soups, salads, and sandwiches from friends around the blogosphere--please join in if you have any to share. Here's this week's post and linkup.

Note: A review copy of "The Alice Network" was provided to me by the publisher Harper Collins and TLC Book Tours. I was not compensated for this review and as always, my thoughts and opinions are my own.

It's Food 'n Flix time again--when a group of bloggers watch a movie--foodie or otherwise, and head to the kitchen to make a dish inspired by it. This month's Food 'n Flix film pick is the 2006 Spanish drama, Volver, starring Penélope Cruz and it's hosted by the amazing Evelyne at CulturEatz. (You can see her announcement post here.) 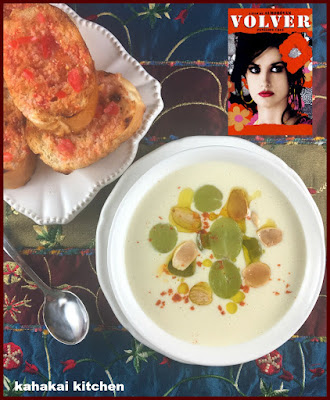 I watched this film on Netflix when it came out but I didn't remember that much about it, so I got it from Netflix again to watch last weekend. I find it's always fun to see a film a second time with my food googles firmly in place. 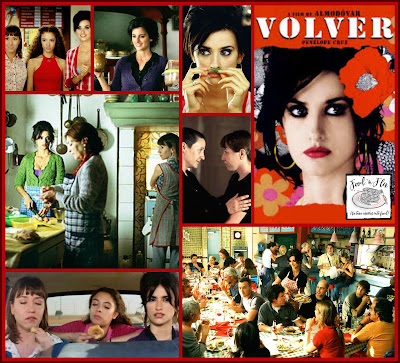 Directed by Pedro Almodóvar, Volver is the story of a family of women from Alcanfor de las Infantas, a small windswept village in La Mancha. Raimunda (Cruz) now works and lives in