One of my challenges with food blogging while having an "eat healthier" goal is when a favorite chef, like Ina Garten, is not exactly known for their low-fat recipes.  This gives events like Barefoot Bloggers an added complexity; to lighten up the recipe and make it a better choice health wise, but still have it taste terrific.  January's first Barefoot Blogger's recipe pick is Banana Sour Cream Pancakes, picked by Karen of Something Sweet By Karen. I decided to substitute whole wheat flour, lighten up the dairy, reduce the sugar and sodium and eliminate the butter. I also thought it would be fun to take them "tropical", adding some pineapple and just a bit of toasted coconut and macadamia nuts for a bit of crunch. Ina's recipe is here at Food Network and also in Barefoot Contessa Family Style on page 177. My changes to the recipe are in red below. 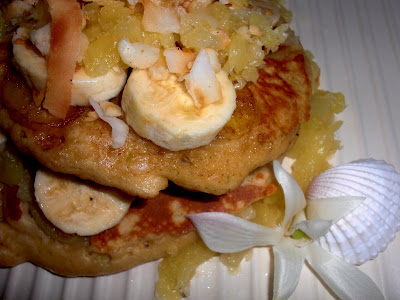 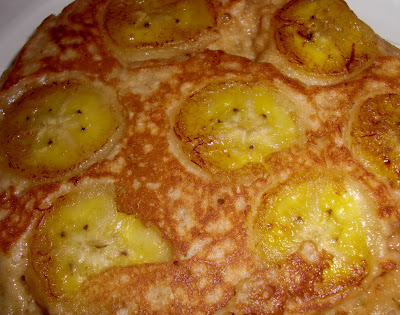 Notes/Results:  The first step to making a Barefoot Contessa recipe less hard on the waistline is not making a "ginormous" amount as Ina's recipes usually do so I halved the recipe.  I used whole wheat flour (less processing and a tad more fiber than regular flour).  For the dairy I used low fat sour cream (50% less fat than regular), because I had some to use up but low fat Greek yogurt would have been another great choice. I used non-fat milk as well. With the sweetness and flavor from the bananas, I felt like I could reduce the sugar and the sodium with no ill effects. (I used 1 Tbsp of sugar and 1 tsp salt for my half batch of pancakes). Another change I made was subbing lime zest for the lemon zest, only because I had used my last lemon and didn't want to make a trip to the store, but the fact I was going for a tropical vibe anyway made lime a good option.  To cook the pancakes I used butter flavored PAM spray to reduce even more calories. I sliced my bananas instead of dicing and spread them out because I wanted more banana per bite. Finally, my topping was a combo of the sliced bananas, some drained pineapple (in it's own juice instead of sugar syrup) and a sprinkling of some toasted unsweetened coconut flakes.  Note: there is nothing wrong with pure maple syrup as a sweetener, (it is much healthier than a sugared maple syrup and has some vitamins and nutrients to boot), I just have a tendency to want to use it with butter and drown my pancakes in it so for me the tropical topping is a better option. I added some extra calories and fat with the toasted coconut flakes and the mac nuts but I used a just a little on the very top, there are good for you nutrients in those calories, and it adds some nice crunchy texture. I ended up with 5 pancakes instead of the six the 1/2 recipe should have made so mine must have been a bit bigger than Ina's and I stacked two on the plate.  With the heartier topping, one would have been plenty but two made a better photo!  So the important question... How were the pancakes?  Great! Soft but chewy texture, tasted delicious and were very satisfying with the tropical topping so they didn't need any sides of bacon. I didn't miss any of the sugar, butter or extra fat and there was no guilt involved. I would make this recipe again with my modifications. 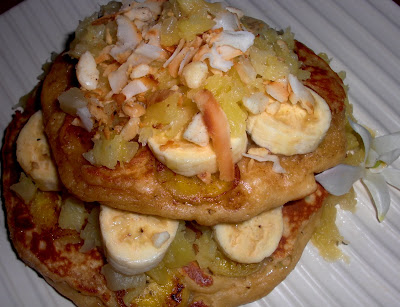