The Book Tour Stops Here: A Review of "Beulah's House of Prayer" by Cynthia A. Graham, Served with Jacques Pépin's Garlic Soup with Croutons

Happy Aloha Friday! I'm happy to be hosting a TLC Book Tour stop today for Beulah's House of Prayer by Cynthia A. Graham. Accompanying this Depression-era story with its touch of magic is a bowl of Jacques Pépin's simple but delicious Garlic Soup with Croutons, inspired by my reading. 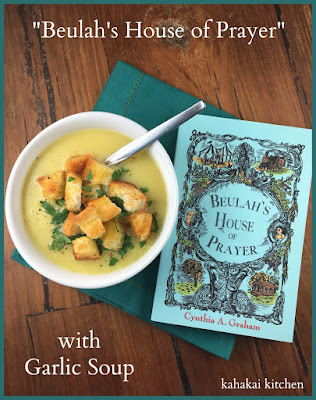 In 1934 the tiny town of Barmy, Oklahoma, is in desperate need of a miracle. The cows are hungry, the rain won’t fall, most of Main Street is boarded up. Young aspiring trapeze artist Sugar Watson is dumped unceremoniously into this bleak setting with little money and only one thing on her mind—escape. Beulah Clinton, a Holy Ghost preacher, has dedicated herself to helping the distressed in this ragged little wasteland, and Sugar soon finds herself thrown in with Marigold Lawford, the simple-minded widow of the richest man in town, and Homer Guppy, a boy trouble follows like dust after a wind.

On Black Sunday, the worst dust storm in history brings with it a choice: Sugar must decide whether or not to return home, leaving the hospitality—and love—of Barmy’s inhabitants. A stunning Depression-era literary novel with a touch of magical realism, Beulah’s House of Prayer captivates until the very end. 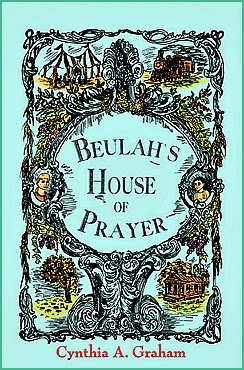 Having read and loved both of Cynthia Graham's historical mysteries with Sheriff Hick Blackburn, I was excited to jump on the tour for her newest book. Although retaining the historical fiction and economically struggling small town setting of her other books, Beulah's House of Prayer departs from the mystery genre and instead is a short literary novel with a bit of magical realism skillfully woven in. It amazes me the amount of story and character-building that Graham accomplishes in a relatively short (200-ish) number of pages. Although I leave her books wanting more, I never leave feeling short-changed by the story told and the characters I meet.

Barmy is a dusty, down-trodden place but there is hope and yes, magic contained in the towns and its citizens that give it a beauty that transcends its dusty appearance. Our story is primarily told by the daughter of Sugar Watson, who ends up in Barmy at the age of fifteen and wants to get out. Offered food and shelter in a ramshackle house by Beulah Clinton, an evangelical preacher, Sugar meets Marigold Lawford, left on the streets by the greedy son of her dead husband. Marigold's lack of backbone and innate goodness frustrate Sugar, who looks at everyone she meets in terms of what they can do for her and how they can help get her out of Barmy. Sugar finds herself attracted to Homer Guppy, the town's trouble-making teen and who the town looks at with a mix of fear, caution, and sympathy because of the frequent beatings he receives at the hands of his alcoholic father. Marigold is drawn to the local Sheriff, Joe Brownfield, but feels it would betray her dead husband to care for Joe. This ragtag group with their various quirks and flaws quickly worked their way into my heart while Beulah remained mysterious--a sort-of all-knowing, all-seeing guide, not afraid to offer her strong opinions, prayers and bible verses.

There are times that magical realism can sway to the 'too much woo-woo' side, and take over a story. In Beulah's House of Prayer, it creeps its way in and it is just the right amount, adding a unique and special touch to this book. Although my anticipation built as the pages turned and the story began rushing to its climax, I wanted to stay with these characters and was sad to see it end. An overall charming and wonderful read--highly recommended!

Author Notes: Cynthia A. Graham is the winner of several writing awards, including a Gold IPPY and a Midwest Book Award for Beneath Still Waters, and her short stories have appeared in both university and national literary publications. She attained a B.A. in English from the Pierre Laclede Honors College at the University of Missouri in St. Louis. Cynthia is a member of the Historical Novel Society, the St. Louis Writers’ Guild, the Missouri Writers’ Guild, and Sisters in Crime. She is the author of two works of historical mystery: Beneath Still Waters and Behind Every Door. Beulah’s House of Prayer is her first foray in the land of magical realism. Connect with Cynthia via her website or Twitter.

Since we are in an economically depressed Dust Bowl town, there are not a lot of tempting food descriptions in Beulah's House of Prayer. There are mentions of coke and donuts, ice cream, canned beans, cornbread and soda crackers, a cinnamon candy stick, holiday dishes of turkey, chicken, green beans, sweet potatoes and pecan pie, cornmeal mush, a box of candy, and cotton candy. Still, at Beulah's house; "There was always a pot of coffee on the stove and there was always soup or beans for the downtrodden." Beulah was always in the process of making soup or baking bread to feed those who came to her door, so I thought a simple soup would be a good pairing. 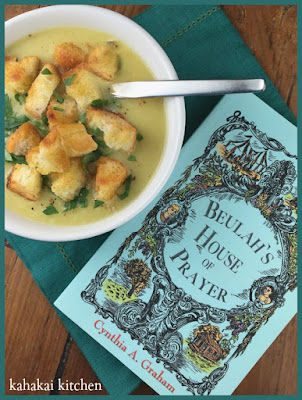 There is a mention of vegetables in Beulah's soup and although there may not have been garlic, leeks and potatoes, that's what I was craving this week so I decided to make Jacques Pépin's Garlic Soup. Its comforting, nourishing and served with fried bread croutons on top (always a bonus!) as a nod to the bread Beulah baked.

I did a vegan version and my changes to Pépin's are noted in red below. 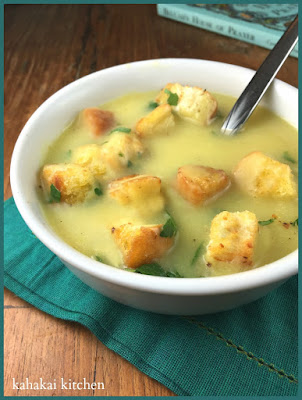 Heat 2 tablespoons of the oil in a heavy pot and, when hot, add the leeks and garlic. Cook over medium heat for about 3 minutes until the vegetables begin to soften, then add the stock, potatoes and salt, and bring to a boil. Cover, reduce the heat and boil gently for 30 minutes.

While the soup is cooking, make the croutons: Heat the remaining 2 tablespoons of oil in a large skillet. When hot, saute the bread cubes, stirring almost continuously, until they are browned evenly on all sides.

When the soup mixture is cooked, push the mixture through a food mill or puree in a food processor. To puree in a food processor, strain the soup first through a fine sieve, Place the solids in the bowl of a food processor and process until smooth, then combine with the reserved liquid. (If too much of the liquid is processed with the solids, the mixture becomes foamy, yielding a soup with a frothy texture like baby food.) (Note: I strained the soup and put the solids in my high-speed blender with a little of the broth, then stirred the purée back into the broth so the soup was not frothy and remained smooth and velvety.)

Stir the butter into the hot soup and serve with the croutons. 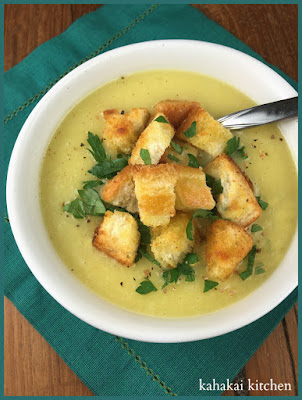 Notes/Results: This is a velvety and rich soup with a delicious garlic flavor. It might seem like a lot of garlic but the flavor is mellow, not sharp and biting and it balances nicely with the sweetness of the leeks. I am always a fan of crispy warm croutons on top of soup and here they add great texture to the smooth puréed soup. It is similar to Pépin's Potato Leek Soup that I have made before, but I think I like this one a little better due to the garlicky flavor. I wanted to make this soup vegan and dairy free so I used a vegan mock-chicken stock and a vegan butter substitute. You could leave out the butter but it does add to the richness. This hit the spot on a rainy night. I would happily make it again. 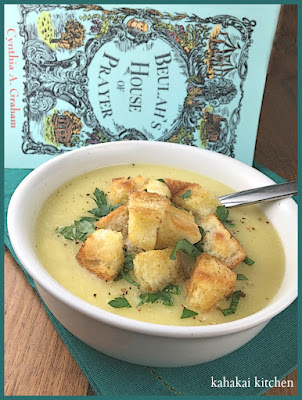 I'm linking this Jacques Pépin soup up at this week's I Heart Cooking Clubs Monthly Featured Chef Event post. Normally I include a roundup of my favorite recipes for the featured chef but Jacques Pépin has so many great recipes, I will just include a link to my recap post with my Top 10 favorites from when we cooked with him last year. You can see what Jacques Pépin recipes everyone made this week by clicking on the picture links on the post. 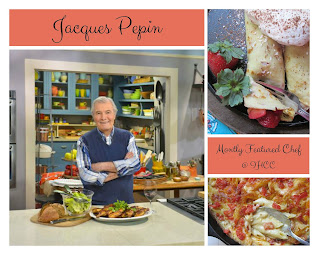 It's a rare two-soup week so I am linking this one up to this week's Souper Sundays post here at Kahakai Kitchen. If you aren't familiar, Souper Sundays is my weekly soup tribute that includes sandwiches, and salads and is open to anyone and everyone who wants to share a soup, salad, or sandwich post that week. You can see the details for joining in on the current weekly post or here--we would love to have you!

Note: A review copy of "Beulah's House of Prayer" was provided to me by the publisher and TLC Book Tours in return for a fair and honest review. I was not compensated for this review and as always my thoughts and opinions are my own.