The Book Tour Stops Here: A Review of "The Perfect Girl" by Gilly Macmillan, Served with Tomato and Basil Bruschetta

Today's TLC Book Tour stop is for the psychological thriller/drama The Perfect Girl by Gilly Macmillan. Along with my review is a recipe for a simple Tomato & Basil Bruschetta, inspired by the book. Zoe Maisey is a seventeen-year-old musical prodigy with a genius IQ. Three years ago, she was involved in a tragic incident that left three classmates dead. She served her time, and now her mother, Maria, is resolved to keep that devastating fact tucked far away from their new beginning, hiding the past even from her new husband and demanding Zoe do the same.

Tonight Zoe is giving a recital that Maria has been planning for months. It needs to be the performance of her life. But instead, by the end of the evening, Maria is dead.

In the aftermath, everyone—police, family, Zoe’s former solicitor, and Zoe herself—tries to piece together what happened. But as Zoe knows all too well, the truth is rarely straightforward, and the closer we are to someone, the less we may see.

Unfolding over a span of twenty-four hours through three compelling narratives, The Perfect Girl is gripping, surprising, and emotionally complex—a richly layered look at loyalty, second chances, and the way secrets unravel us all. 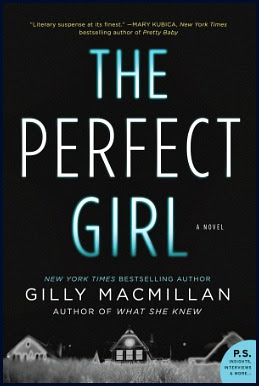 So many secrets in one small family! The Perfect Girl takes place over slightly less than twenty-four hours, but that is plenty of time for a past life to be discovered, a death to occur, and drama and secrets galore to run rampant. For all of the intrigue, I found the book to be a bit of a slow start for me as the story unfolds with a Sunday night piano recital that gets interrupted as someone from Zoe Maisey's past disrupts the concert she is giving with her stepbrother Lucas. From there it only gets worse as what is revealed threatens the "Second Chance Life" Zoe's mother Maria has crafted for them. Three years ago, when she was fourteen, Zoe was behind the wheel of an accident that killed the other teens in the car and she spent time in a detention center for her crimes. That old life is something Maria desperately wants to keep hidden--and there are even more secrets that her new husband Chris and Lucas may be keeping, not to mention what Maria's sister/Zoe's aunt Tessa is keeping quiet about.

The story is told from the points of view of Zoe, Tessa, Tessa's depressed and alcoholic husband Richard, and Sam--Zoe's attorney from her past and Tessa's present-day lover.  The book's slow start began to take off and the tension mounts as the story plays out and snippets of what happened with Zoe when she was fourteen are woven in. Zoe is an interesting character--a gifted child prodigy with definite issues--although I found myself sympathetic to her, I also didn't trust her at times. Actually I found most of the characters that way--everyone is hiding something and there is a fairly creepy vibe coming off this entire dysfunctional family. Not that it's a bad thing as it kept me turning the pages to find out what happened to Maria and just what was going to happen to the rest of them.

The Perfect Girl is my first Gilly Macmillan book, although I have had What She Knew downloaded on Kindle for a while. I will definitely read it now. The Perfect Girl is for you if you like suspenseful psychological thrillers and dark family dramas.

Author Notes: Gilly Macmillan is the Edgar Nominated and New York Times bestselling author of What She Knew. She grew up in Swindon, Wiltshire and lived in Northern California in her late teens. She worked at The Burlington Magazine and the Hayward Gallery before starting a family. Since then she’s worked as a part-time lecturer in photography, and now writes full-time. She resides in Bristol, England.

Since most of the action takes place in a bit less than 24 hours, there is not much time for food in The Perfect Girl. The main food discussed is the bruschetta that Zoe's mother Maria wants to make for her husband and stepson, after the scene at the piano recital and Zoe thinks that one of her caseworkers at the detention center would call it "a classic example of displacement activity" to avoid dealing with the problem at hand. Maria also volunteers to whip up some chicken Parmigiana for the same reason. There are also brief mentions of olives, fish and chips, toasted sandwiches, instant coffee, vats of chili con carne and baked potatoes, lasagna, mashed banana and an orange puree for Baby Grace. 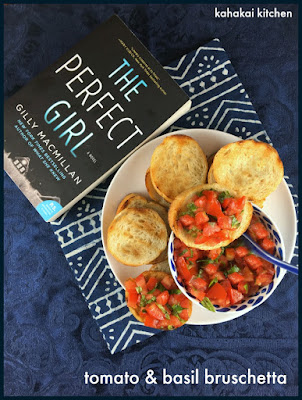 Bruschetta seemed the best pairing for the book, especially as there are good, ripe tomatoes and fresh basil around as summer moves to a close. I decided on a simple tomato and basil bruschetta, it really doesn't need much of a recipe, just good fresh ingredients, to make it taste amazing. 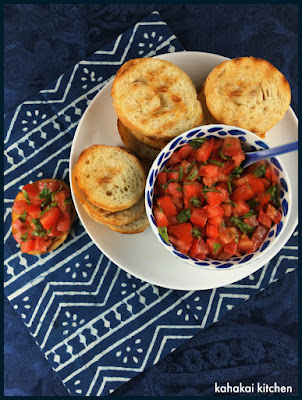 
Heat a grill pan over medium-high heat. Brush bread slices lightly with olive oil. When pan is hot, grill bread slices until toasted with grill marks on each side (about 2-3 minutes er side). Rub toasts with cracked garlic cloves on one side.

Squeeze the seeds from the tomato halves and discard. Chop tomatoes into small pieces. Chiffonade basil by placing leaves on top of one another, rolling them into a tight log, and then thinly slicing. Gently combine basil with tomatoes, adding a drizzle of olive oil, coarse sea salt, and freshly ground black pepper to the bowl and gently tossing the tomato/basil mixture to coat.

Place topping in a small bowl and pile toasts pile toasts around the bowl. Serve room temperature and enjoy! 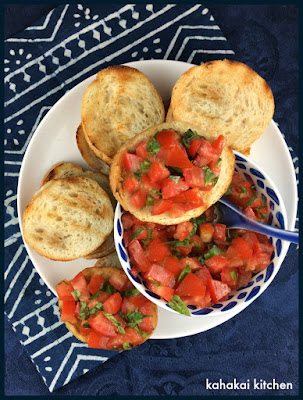 Notes/Results:  Delicious! I sometimes forget how good bruschetta can be with the right ingredients. I liked the little extra punch of garlic from the garlic salt and the sweetness of the ripe Roma tomatoes. I am not a fan of balsamic vinegar on my bruschetta as I think it has a tendency to overpower the other ingredients, so I left it out of the mix here. These made a great lunchtime pairing with leftover Simple Chickpea & Artichoke Heart Soup. 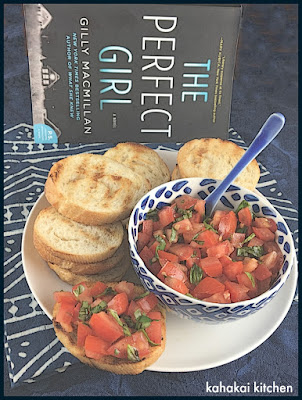 Since Bruschetta are like little open-faced sandwiches, I am linking them up to this week's Souper Sundays post here at Kahakai Kitchen. If you aren't familiar, Souper Sundays is my weekly soup tribute that includes sandwiches, and salads and is open to anyone and everyone who wants to share a soup, salad, or sandwich post that week. You can see the details for joining in on the current weekly post or here--we would love to have you!

Note: A review copy of "The Perfect Girl" was provided to me by HarperCollins and TLC Book Tours in return for a fair and honest review. I was not compensated for this review and as always my thoughts and opinions are my own.