The Book Tour Stops Here: A Review of "The Buried Book" by D.M. Pulley, Served with (Vegan) Chocolate Ice Cream

Just because it's after Labor Day doesn't mean ice cream-making season is over. On today's TLC Book Tour, I am serving up a simple creamy and delicious non-dairy chocolate ice cream that's sure to please even dairy lovers, inspired by the historical mystery novel;  The Buried Book by D.M. Pulley. Read the post below for my book review and an easy ice cream recipe. 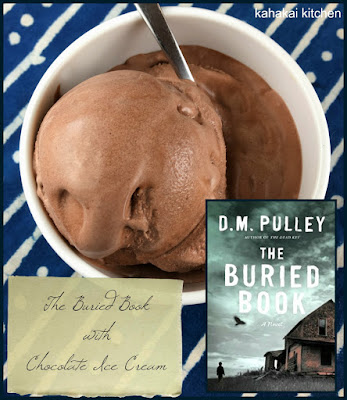 When Althea Leary abandons her nine-year-old son, Jasper, he’s left on his uncle’s farm with nothing but a change of clothes and a Bible.

It’s 1952, and Jasper isn’t allowed to ask questions or make a fuss. He’s lucky to even have a home and must keep his mouth shut and his ears open to stay in his uncle’s good graces. No one knows where his mother went or whether she’s coming back. Desperate to see her again, he must take matters into his own hands. From the farm, he embarks on a treacherous search that will take him to the squalid hideaways of Detroit and back again, through tawdry taverns, peep shows, and gambling houses.

As he’s drawn deeper into an adult world of corruption, scandal, and murder, Jasper uncovers the shocking past still chasing his mother—and now it’s chasing him too. 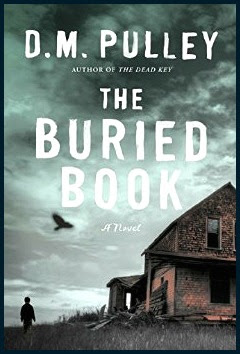 I will confess that I struggled a bit to get through The Buried Book, not because I disliked it, or the writing wasn't excellent, but because Jasper is such a strong and wonderful character that he instantly captured my heart and reading everything he went through became almost painful at times. Set mostly in Michigan farm country, as well as Detroit in the 1950s, it wasn't an easy time for many and the physical and sexual abuse of women and children, combined with the corruption and the bigotry toward the Native Americans does not make for a pretty picture. At nine, Jasper seems already too old for his years and unfortunately as he stubbornly persists in learning what happened to his mother and the secrets that surround her and the community, he sees and hears much more than any child should. There were points when I had to put the book down and read something happier for a while. The author doesn't sensationalize what happens, but the scary and sometimes graphic moments are told from Jasper's point of view and his natural confusion at trying to understand what is happening in this dark adult world make those moments all the more poignant and powerful. There are some bright spots in the book, people who are kind to Jasper along the way-including his aunt, uncle, and cousin who support and love him even if they don't understand him or agree with his persistence in finding his mother. The tension definitely builds and although I guessed some of the mystery surrounding Althea, there were some surprises and twists that kept me turning the pages to the end.

If you like 1950s historical fiction, mystery, family drama and coming of age stories and you can deal with some definite darkness, The Buried Book is a book that will sweep you up and keep you thinking about it after you finish. Jasper is a wonderful character--easy to care about and root for and his love for his mother shines through. This is the first book I have read by D. M. Pulley but I am adding her first book to my TBR list. 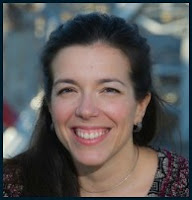 Author Notes: D. M. Pulley lives just outside Cleveland, Ohio, with her husband, two sons, and two dogs. She is a professional engineer who specializes in rehabbing historic structures as well as conducting forensic investigations of building failures. Pulley’s structural survey of an abandoned building in Cleveland formed the basis for her debut novel, The Dead Key.

Most of the food described in The Buried Book was what could be grown or raised on a farm and frankly, some of the butchering pushed me more into the meat-free side of life. Outside of the pork, beef, venison and goose, there was mention of bread, cookies--oatmeal raisin, frosted red, white & blue), sandwiches, fermenting apples,scrambled eggs, ham and bacon, flapjacks, corn, beans, sugar beets and oats, mashed potatoes and gravy, a Greek dinner with burgers and onions, cokes, a moussaka special and Greek pastries, corn mash liquor, apple pie, coffee, wild berries, a roasted whole fish on a spit, chocolate cream pie, fried chicken, Scotch, and warm soup.

Because the book was full of many not-very-pleasant experiences for Jacob, I chose to make ice cream, inspired by a scene where Uncle Leo takes Jasper and his cousin Wayne into town and the creamery where they get ice cream: "...the biggest ice cream cones Jasper had ever laid eyes on. He was still licking the chocolate from his lips when they pulled back down Harris Road around dusk." Although I didn't put it in a cone, and I made a vegan version, this is definitely a very lick-able chocolate ice cream. 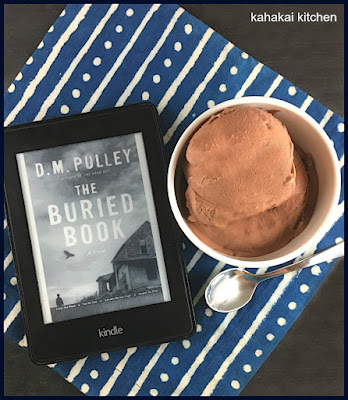 I like ice cream dairy or non-dairy, but I try to make dairy-free versions at home. This is a simple chocolate and coconut milk ice cream. I would call it a milk chocolate flavor, which is what I like in chocolate ice cream. If you want to go more intensely chocolatey, you could increase the cocoa powder (use a good unsweetened dark cocoa powder like Valrhona) and/or melt some dark vegan chocolate into the saucepan with the other ingredients. 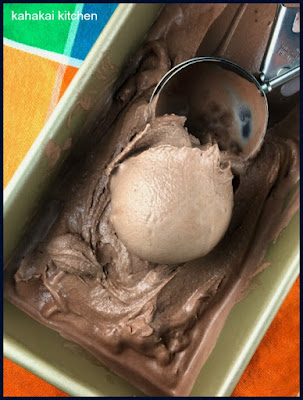 Whisk coconut milk, cocoa powder, sugar and espresso together in a medium saucepan until well combined. Cook over medium heat, stirring frequently, until the mixture comes to a simmer and the sugar and espresso powder are dissolved. Transfer mixture to a blender, add vanilla extract, cover tightly, and carefully blend for about 1 minute.

Allow to cool completely on the counter, then pour into an airtight container and chill in fridge for 2 to 3 hours or until very cold.

Place in a bread pan or similar sized-container, cover with plastic wrap and freeze until firm enough to scoop--about 4 to 5 hours.

If too solid, let ice cream thaw for 8-10 minutes before scooping. 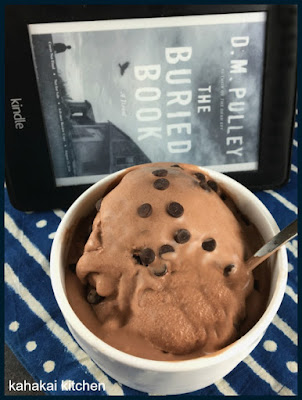 Notes/Results: I was trying to get my ice cream pictures while there was still daylight and my timing was a bit off, so I only froze it about 2 hours and it was a tad melty still--especially once it hit the bowl. Not an issue for eating, as it had that nice creamy, soft serve ice cream texture, just not as pretty in the photos as firmed up ice cream would have been. I tossed on some vegan mini chips for some of the pictures--you could add them to the ice cream if you wanted to for a chocolate-chocolate chip variation. The flavor was delicious and just the level of chocolate I wanted, with the added espresso powder adding richness more than a coffee flavor. I am usually more of a vanilla-based ice cream fan, but this was a nice change and I will definitely make it again. 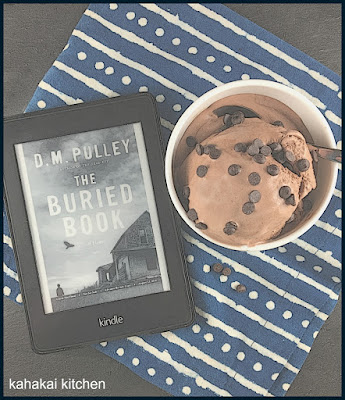 Note: A review copy of "The Buried Book" was provided to me by the publisher and TLC Book Tours in return for a fair and honest review. I was not compensated for this review and as always my thoughts and opinions are my own.