Soup was the first thing I cooked when we started cooking along with Tessa Kiros at I Heart Cooking Clubs, Portuguese Purslane Soup to be exact. I owned almost all of her books and had cooked a few of her recipes before she became our official IHCC chef for six months, but the soup was the first for the weekly themed posts. So, it seems only fitting to make another big bowl of soup send her off again, as we will be transitioning to our new chef Rick Bayless, next week. 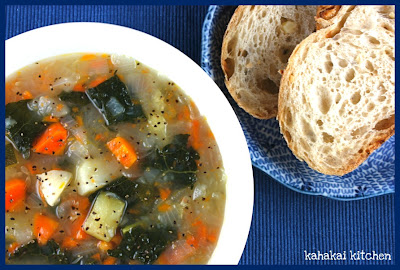 This very simple Vegetable Soup is also a Portuguese-style dish and very basic with just six ingredients not counting water, salt and pepper. Some might call it plain. I call it a bit magical, with just a few simple ingredients coming together to end up so satisfying and flavorful. 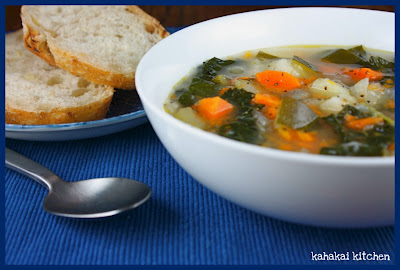 Tessa says, “I went to the fruit and vegetable market in the Algarve and asked them to give me whatever vegetables a Portuguese lady would use to make a soup, please. They gave me these exact amounts for one family. … This is simple, lovely and healthy—the kind of soup I want to eat once a week forever.”

Heat the oil in a large pot and sauté the onion, chopped carrot and zucchini until softened. Add 5 cups of cold water (enough to cover the greens to be put in later). Season well, add the potatoes and halved carrot, stir and bring to the boil. Cover and reduce the heat a dash. Cook for 15 minutes, then check there is still enough water. Stir in the spinach, cover again, bring back to the boil and cook for 10 minutes more. The potatoes should be soft but not collapsing.

Lift out most of the potatoes and pieces of carrot with a slotted spoon, mass well and return to the pot. Stir and leave covered until ready to serve (It’s best not quite piping hot). Add water if it needs thinning, but it should be more like a thin stew than a thick soup. Serve with bread. 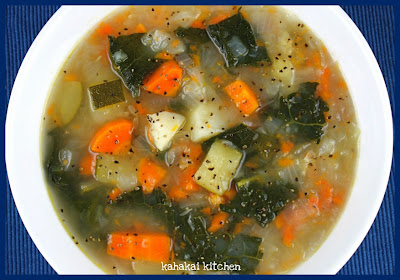 Notes/Results: Easy, healthy and nourishing vegetable soup without a lot of bells and whistles, and it doesn't need any. The flavor of the vegetables really comes through with the slight sweetness of the carrots and the slight pleasing bitterness of the kale. The onions are key to getting the flavor into the broth so don't skimp on them, and make sure to season the broth well with salt and pepper. The mashing up of the potatoes and carrots is something I have seen in some of Tessa's other soup recipes and it adds a good velvety thickness to the soup. This was perfect comfort food, especially when served with thick slices of a local bakery garlic bread. I would make this again.
This soup is headed for Sunday Night Soup Night, a weekly seasonal soup event hosted by Debbie of Easy Natural Foods. 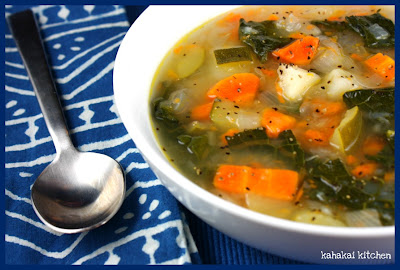 It's been a delight to cook along with Tessa Kiros at I Heart Cooking Clubs and I certainly got to delve into my collection of her books. Everything I made in the past six months was excellent but if I had to pick my favorites (the dishes I loved most and that remain in my head weeks and months after making), my top 3 are: 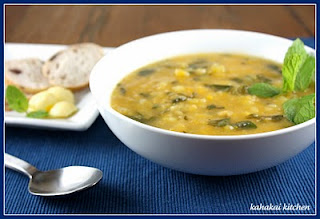 The aforementioned Portuguese Purslane Soup, which had a deliciously unusual taste from the purslane, cinnamon and lemon. This is my favorite Tessa recipe and if you can get your hands on purslane, I urge you to try it. 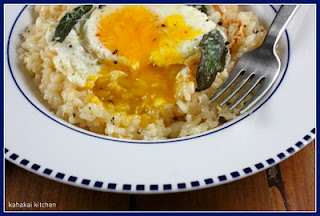 Tessa's Risotto with Friend Egg is a simple indulgent comfort food dish. The runny egg yolk mixed into the creamy risotto is divine. 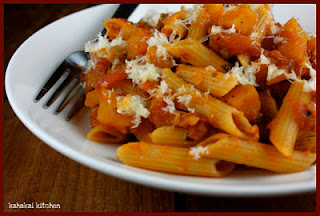 Penne con la Zucca (Penne with Pumpkin). I used local kabocha squash for this flavorful pasta that was a perfect fall-inspired dish, warming and creamy.
Honorable mentions go to the indulgent Sage and Rosemary Mashed Potatoes and the tomato-cheese delight of Garides Saganaki (Shrimp with Feta and Tomato). Now I am just craving all of these wonderful dishes again!

Speaking of wonderful, crave-worthy dishes, let's see who is in the Souper Sundays kitchen this week.
Janet of The Taste Space made Cotter’s Borlotti Bean, Zucchini and Roasted Red Pepper Soup and says, "Red peppers and tomatoes, right at summer’s peak, were roasted to perfection, then simmered and pureed to create a silky broth. Meanwhile, you cook your cranberry beans. You then toss them with lemon juice and marjoram. Next, you saute the zucchini with garlic to take off their raw edge. This can all be done as the veggies are roasting. When you are all set to eat, ladle out a portion of the tomato-red pepper broth, top with zucchini and cranberry beans. Each component is slightly different, both in taste and texture, creating a complex and tasty soup. The lemony beans with the garlicky zucchini swim in the creamy and rich broth with wonderful results." 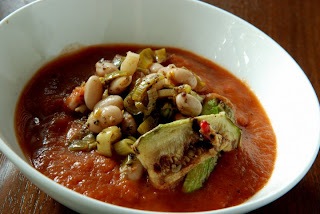 Ana from Sweet Almond Tree made this flavorful Greek Lentil Soup and says, "I have been trying to get around to making this soup for a month now. Today was the day. I added lots of soup vegetables to compliment the lentils. I used parsnip and leeks which are not found in traditional versions of Greek lentil soup, but why not amplify its flavor a bit? The amount of tomato used depends on the cook. If you like a really strong lentil flavor, cut down on some of the tomatoes and tomato paste. If you like tomatoes, use them. The important thing is that anyway it's cooked, lentil soup is always fragrant and tastes oh so good" 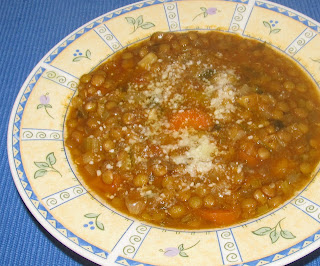 Joanne of Eats Well With Others says, "If I could get away with calling this red velvet soup, without having to endure looks of total and utter disappointment upon the realization that it is not, in fact, cocoa buttermilk-flavored, nor is it finished with a dollop of cream cheese frosting...then I would. Because that would be a much more accurate description than "Red Lentil Soup with Lemon", which sounds plain-jane at best, and is certainly not something you want to rush home and make as if your life depended on it. But rush, you should. ... The lentils basically melt into the broth, creating a thick and almost creamy texture. Combine that with a hint of tang from the lemon, spice from the cayenne, and smokiness from the cumin...and there you have what can only be described as a flavor orgy in a bowl." 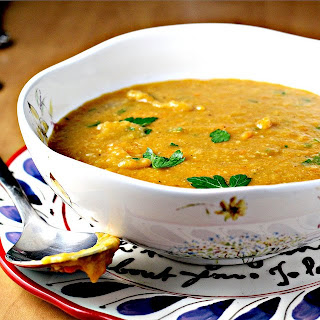 This brightly-hued Split Pea and Spinach Soup hit the spot this week for Debbie of Easy Natural Food. She says, "The combination of yellow split peas (my favorite kind!) and green spinach really caught my imagination in this recipe. I imagined the yellow-green contrast would look pretty (which it does!) and I like having another way to get more greens into my diet. I made a couple minor deviations from the recipe (for example the lemon juice was my addition to lift the flavor just a little) otherwise it is true to the original." 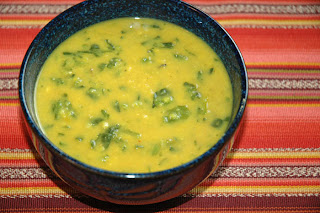 Judee of Gluten Free A-Z was also rocking the lentil this week with her version of Egyptian Red Lentil Soup. She says, "If you like split pea soup, you will love this easy red lentil soup which can be made faster than split pea, and is also very economical. There is no need to blend it, as it will become this consistency while cooking. It is very popular in most Middle Eastern countries and some say it dates back to Biblical times when Esau made a red lentil soup (porridge) for his father Jacob. It is nutritious, packed with fiber and lots of phytonutrients." 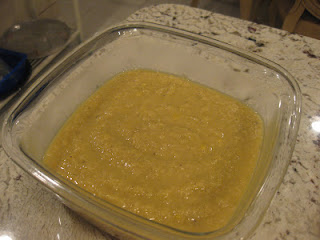 Stash of The Spamwise Chronicles has a transitional Olive and Orange Salad to share and says, "The tail end of winter oftentimes feels like “the season that time forgot”. This is a threshold moment, where there are signs of a progressive transition from one season to the next evident at our farmers’ markets that are not yet fully matched by what’s happening with the weather. The urge to switch from hearty soups and stews to lighter fare is pronounced, especially when one has subsisted on cabbage, mushrooms and assorted root vegetables and tubers for the past three months. In memory of the spring that arose earlier this month, I offer the following for your contemplation..." 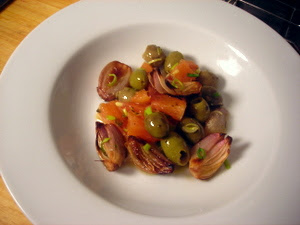 Carol of There's Always Thyme to Cook... whipped up Soy Marinated Flank Steak Salad and says, "All I can say is that this was one really great marinade. We loved it. I made it for grilled halibut and my family minus Miss Picky, loved it. Go figure they'd flip for fish these days. I didn't want to push my luck with the fish so just in case I also made it with a flank steak. Sort of Surf and Turf? The leftover steak was just as good in a salad the next day. There was no fish left. You could have picked me up off the floor that they loved it so much. That was a complete shock. We're really doing well with the fish on the menu lately. So fish is on the menu again this week." 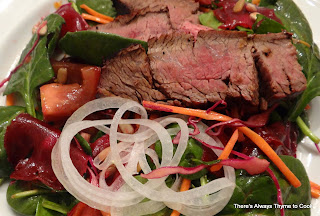 Lentils seem to be the big player ingredient in soups this week. ;-) Thanks to everyone who shared their dishes! If you have a soup, salad, or sandwich that you would like to highlight, just click on the Souper Sundays logo for all of the details.
Note: Souper Sundays is posting a few hours early this week as someone is going to a mid-morning matinee of The Hunger Games with a friend. (and someone is very excited about it!) ;-) If any dishes happen to come in after the posting but before the deadline of noon Hawaii time, I will add them when I get back this afternoon.
Have a happy, healthy week!