Georgia Byrd dreams up all kinds of possibilities and records them in her journal. Working in cookware in a large department store, she longs to be a professional chef. She also has a crush on a handsome co-worker but can't seem to approach him beyond a little awkward flirting. Georgia doesn't have the courage to make her dreams of a fabulous life come true until a minor accident leads to an x-ray, that leads to a diagnosis of an incurable disease. Given a grim prognosis of just a few weeks to live, Georgia decides to set off on a holiday dream vacation and experience all of her many possibilities in the time she has left. Quitting her job and cashing in all of her savings, she splurges on a deluxe winter trip to a glorious and exotic European hotel and spa where she will live the life she has always wanted to live in the limited time she has left. 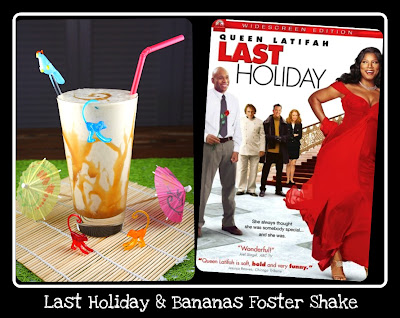 Last Holiday is a food-friendly comedy and it's our Food 'n Flix March selection, hosted by Leslie of La Cocina de Leslie. It's a funny, cute and sweet movie that although predictable in plot, shines from the effervescent performance of Queen Latifah. There is plenty to drool over in this movie--a luxury hotel, spa treatments, a new wardrobe for Georgia, LL Cool J--who is looking mighty fine, and of course some glorious food cooked by the world-renowned Chef Didier, played by a surprisingly charming Gérard Depardieu. A feel-good film that I saw when it first came out, it was fun to go back and revisit. 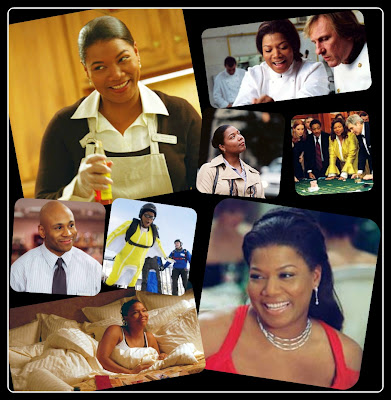 There was plenty of food inspiration in this film, but I was craving decadent Bananas Foster and since the Food Network did a cross promotion with the movie (Georgia is inspired by Emeril Lagasse), I went there to find the specific recipe from the film. Once on the Food Network site, it showed me "other recipes I might like" and I stumbled across the Thick Bananas Foster Shake from Sunny Anderson. One look at the accompanying photo of the caramel drizzled glass and I was hooked. It's a splurge-worthy treat--full of sugar, fat and alcohol--so very fitting for the movie theme. Since all that dairy isn't so good for my system and allergies, I decided to make a vegan version using non-dairy ingredients like coconut milk and coconut "ice cream." My changes to the recipe are in red below. It was completely fabulous with the changes, however you can make it any old way you please, but I do strongly suggest that you make it! 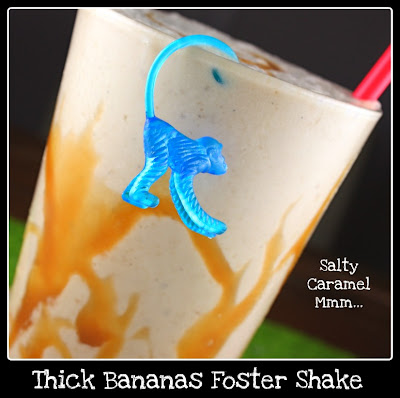 Melt sugar in a small saucepot on medium heat. When sugar has melted to an amber color, add butter (or butter substitute), stirring until melted. Remove from heat and slowly stir in cream (or coconut milk), being careful not to splatter. (Add a pinch of sea salt)
Pour half the caramel into a bowl and set aside. Fold bananas into remaining caramel in saucepot and return to medium-high heat. Stir to combine and cook until tender, about 2 minutes. Set aside and let cool slightly.
Add ice cream, banana-caramel mixture, banana liqueur and rum to a blender and blitz until smooth. Drizzle remaining caramel down the sides of glass goblets. Pour in shake and serve. 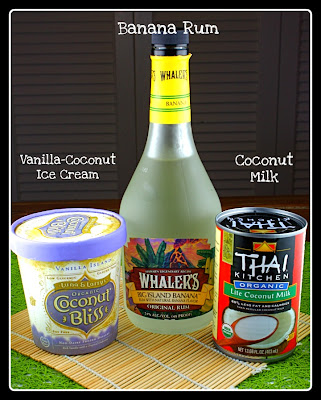 Notes/Results: Oh man is this a little bit of heaven in a glass! I defy, no... I double-defy anyone to drink this shake as made above and tell me it doesn't taste like a full of cream, ice cream and buttery caramel banana shake--if not even better from the tropical kiss of coconut flavor! It is just as super thick and creamy as a diary version would be. And, the only thing better than bananas and caramel is bananas with SALTY caramel--so I decided to add a pinch of coarse (pink Himalayan) sea salt to the caramel mixture. Just do it! Speaking of caramel, it is super easy to make--no need to fear it--just watch it, stir constantly, and add your cream or coconut milk very slowly. (And whatever you do, do not decide that it looks and smells so divine that you have to taste it and dip a finger into the caramel banana mixture before it cools down completely! Ouch! Not that I did that... I'm just saying...) This shake is very rich--I made half the recipe (my thighs didn't need any more), which made one big glass for photos, and I ended up being only able to drink about half. Of course I enjoyed the rest much later. If you want to make this child-friendly or are abstaining from alcohol, you could take out the banana liqueur/rum and replace with a banana-flavored extract. Not quite Bananas Foster that way, but it would still be tasty. Yum and yum! I will definitely make this again as a very occasional special indulgence. 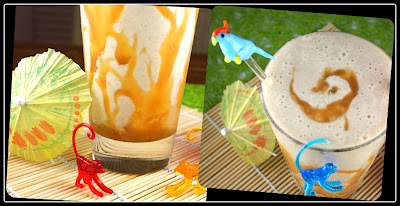 ***Note: Serving this tasty treat adorned with tropical drinker stirrers and cocktail accessories is optional but gives it a "holiday" feel. Plus, I firmly believe that if more people took the time to sit down and share a drink (whether containing alcohol or not), with a cocktail monkey on the glass there would be fewer fights, violence, world wars, etc. It is impossible not to be happy when cocktail monkeys are involved! ;-)

The deadline for March's Food 'n Flix is today (procrastination thy name is Deb!) and Leslie will be doing the roundup on her blog very soon. If you like movies and enjoying cooking dishes inspired by them, consider joining us for April's pick: The Big Night, hosted at spabettie. I predict lots of luscious Italian dishes for that one.