There's a new chef in town at I Heart Cooking Clubs. We will be cooking along with Rick Bayless for the next six months. I tagged this Creamy Corn Soup with Vegetables and Poblano Chile from Mexican Everyday a while back and never got around to making it, so it seemed like the perfect way to kick off making weekly recipes with Rick. 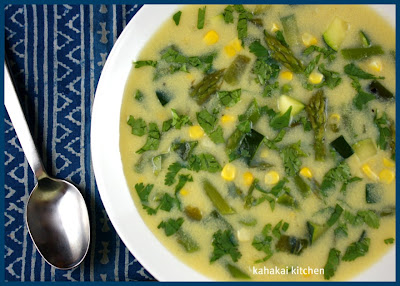 In the book, Bayless uses chicken breast or ham in the soup, but gives variations for both a seafood chowder and a vegetarian version. I adapted the veggie version with local corn, zucchini and asparagus, and removed the dairy by using an unsweetened light coconut milk. The result is creamy with a mild sweet hit of chile and a fitting welcome to spring. 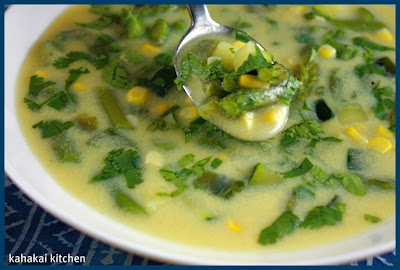 Rick Bayless says, "There's nothing more comfortable or common in Mexico than a creamy corn soup for everyday eating. The Aztecs were making corn soup when the Spanish arrived and tasted their first spoonful (Mexico is the birthplace of corn), but the preparation has certainly moved into the international domain. Corn is so friendly that it takes to each cuisine's local flavors--Mexico's being roasted poblano, which is magic with creamy corn."

Roast the poblano over an open flame or 4 inches below a broiler, turning regularly until blistered and blackened all over, about 5 minutes for an open flame, about 10 minutes for the broiler. Place in a bag or cover with a kitchen towel.

Heat the oil in a medium (3-quart) saucepan over medium. Add the onion and garlic and cook until golden, about 7 minutes. Scoop up the onion and garlic with a slotted spoon, pressing them against the side of the pan to leave behind as much oil as possible and transfer to a food processor or blender; set the pan aside. Add the corn, cornstarch, and 1 1/2 cups of the milk to the onion and garlic. Process to a smooth purée.

Set a medium-mesh strainer over the pan and work the pureed corn mixture through it. (You can skip the straining, but the skins of the corn kernels will give the creamy soup a coarse texture.) Return the pan to medium heat, and whisk frequently as the soup comes to a simmer.

When the chile is handleable, rub off the blackened skin. Pull out the stem and seed pod. Rinse the chile to remove bits of skin and seeds. Cut into 1/4-inch pieces. Stir the chile pieces into the soup, along with vegetables and the remaining 2 1/2 cups milk. Simmer until the vegetables are cooked, about 10 minutes. Taste and season with salt, usually about 1 1/2 teaspoons. Serve hearty portions, with a sprinkling of cilantro. 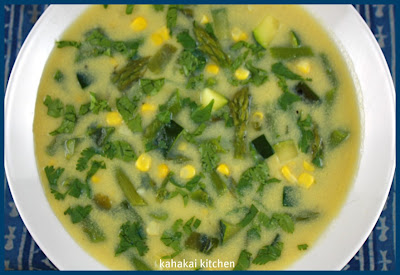 Notes/Results: Fresh sweet corn is so flavorful and it really makes the broth sing in this soup. I had a bag of about 7 ears of local corn from the roadside "corn lady" so I blended the 3 heaping cups into the broth and put in the leftover kernels (about 1 1/2 cups) into the soup whole. Bayless recommends putting the corn through a sieve, something I rarely do when I make corn soup, but it does make the broth very silky so I would advice it. The poblano leaves just the slightest hint of spice and the roasted flavor contrasts nicely with the corn's natural sweetness. To enhance the smoky/roasted flavor without using the meat, I added some cumin and smoked paprika and it made the broth more complex. My only regret is that I was sure I had a potato or two that I wanted to chop small and add to soup to give it more of a chowder feel. Whoops--I guess I used them all in last week's soup. Otherwise this soup was excellent and satisfying, and I would make it again. 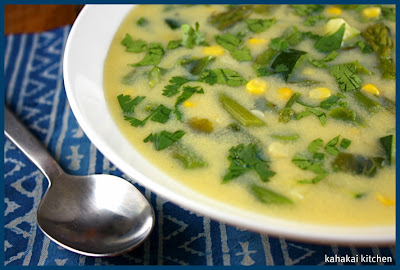 This soup is linked up at I Heart Cooking Clubs for ¡Bienvenido Rick! as well as Sunday Night Soup Night at Easy Natural Cooking.
Let's head into the Souper Sundays kitchen and see who is here on this Easter Sunday.

Graziana of Erbe in Cucina has a garden-grown thick and hearty Watercress and Shallot Soup to share and says, "I sowed watercress in September, but the rain killed almost all young plants. I sowed it again during winter, and finally I had a lot of watercress to harvest. With this harvest I decided to prepare a creamy soup with shallots. You can add chicken or vegetable broth to have a more liquid soup. Serve with croutons." 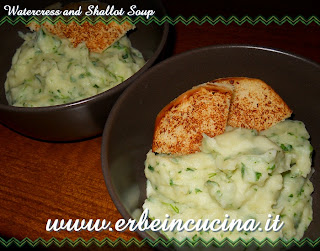 Tigerfish of Teczcape - An Escape to Food made Caramelized Onions Curried Pumpkin Mushroom Soup this week and says, "Yes, it's so thick and chunky that the spoon won't sink! SOUP...as the savory pumpkin kuih (cake) was not really successful. So I kept aside some portions of the kuih in which the texture was soft (to the verge of collapsing), and turn it into a soup. And it WORKED! The truth is - the combination of caramalized onions, shallots, earthy mushrooms and pumpkin do work well in this soup! Plus the spices and peppery notes that brought everything in harmony." 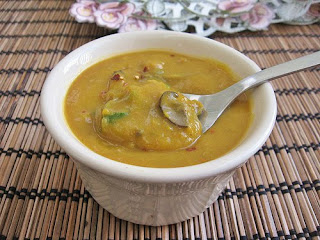 Heather of girlichef is welcoming Rick Bayless with a Chilied Tortilla Soup w/ Kale. She says, "I decided that since I had a beautiful bunch of lacinato kale sitting there looking pretty, I'd make a Tortilla Soup recipe of Rick's that I've been meaning to try. It actually calls for Swiss Chard, but since I'm a lover of kale, I figured it would substitute well. And it did. Very well. Not your typical Tortilla Soup...and not enough to give me a new favorite...but the earthiness of the kale added an unexpected layer of comfort that I enjoyed." 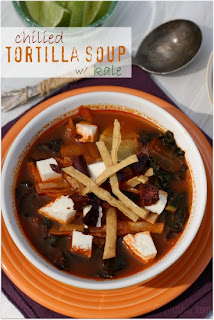 Ana of Sweet Almond Tree tried Greek Artichoke Stew and says, "This hearty stew is a medley of braised artichokes, potatoes, carrots, peas, and onions, flavored with lemon and dill. Spring is a peak harvesting season for artichokes. It's a great time to buy them; they are better tasting, plentiful and can be had for a good price. Nutritionally, artichokes aid digestion and strengthen liver and gall bladder functions. Another wonderful thing they do is to lower blood cholesterol levels. So they are good to eat and are good for you!" 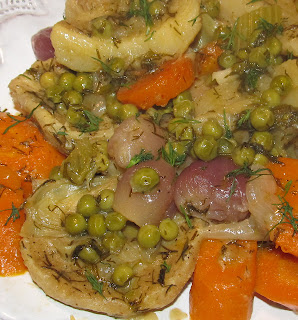 Debbie of Easy Natural Food has a colorful Carrot and Cardamom Soup w/ Coconut Milk and says, "Cardamom is a new-ish spice for me – I mean I’ve known about it for ages, but haven’t cooked with it much before. But I’ve always loved the smell of it. Have you ever smelt a handful of cardamom pods? It is heavenly! It has a very intense aromatic fragrance and is commonly used in Indian cooking, particularly in sweet dishes." 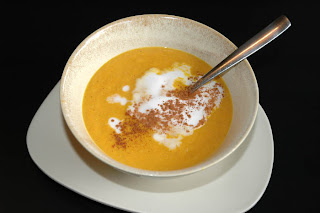 Janet of The Taste Space made an unusual vegan salad, this Raw Thai Pineapple Parsnip Rice. She says, "Let your favourite curry powder lightly dust a smattering of sweet vegetables. Here, parsnips and carrots are chopped fine in the food processor until they resemble rice, or small-grain couscous. Diced cucumber and pineapple add juicy sweetness along with the currants. Green onions give this more kick than the curry powder. The lime juice makes this really pop. If you don’t really care about rawness, toast your cashews and add them right before you serve the dish. I can see myself taking this lovely salad to potlucks this summer for something different." 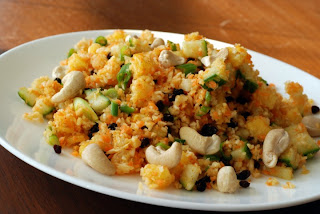 Stash of The Spamwise Chronicles is here with two salads this week. First up is this Spring Lettuce Salad with Salt-and-Vinegar Potato Chips, about which he says, "Two of the salad’s components can be made ahead — the Roseval potato chips and the roasted shallots. The prep time listed below does not take the prep time of either of these two elements into account. Roseval is an heirloom fingerling potato, originally from France. This potato has a reddish peel, and a pale ivory and pink-toned flesh. It develops a robust, buttery flavor when cooked and is especially delicious roasted, sautéed or in salads. Substitute Russian Banana or La Ratte fingerling potatoes if unavailable." 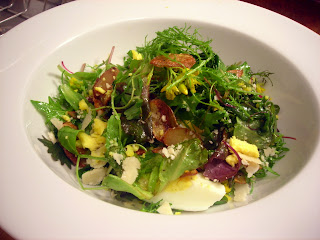 Stash's second dish is a Shaved Asparagus Salad, with Cara Cara Oranges and Roasted Shallots and he says, "This recipe serves two, so you may have to adjust proportions if you’re faced with a gaggle of hungry eaters.You’ll want thick asparagus stalks, say about 1/4″ in diameter, or thicker. Part of the appeal of this salad is the textural contrast between the thin slivers of asparagus, the chunks of orange and the whole roasted shallots, as well as the intermarriage of sweet and tart." 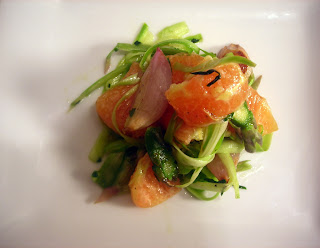 Pam of Sidewalk Shoes made a spring-ready Asian Steak Salad with Mango. She says, "When I saw this come in on my daily email from Real Simple, I knew I was making it. The combination of mango and crisp bell peppers with the beef sounded divine and it was. I’m not retyping, since I didn’t change anything other than to get yellow bell peppers instead of red, because they were organic and the red weren’t. The red would have been prettier." 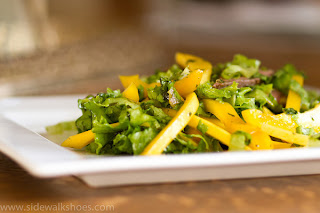 And, we have one sandwich, this Steak and Salsa Verde Roll from Foodycat who says, "Just a quick one, to welcome the bank holiday weekend. A barbecued onglet with a nicely toasted baguette, spread generously with softened butter flavoured with salsa verde. Since "salsa verde" just means green sauce, I should specify that this is the more Italian version, containing herbs, garlic, capers, anchovies and a bit of mustard. All things that go brilliantly with steak." 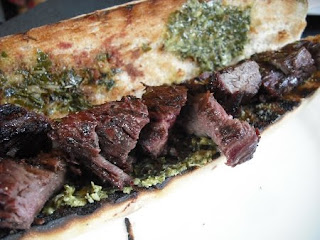 Lovely dishes this week--Thanks to everyone who joined in. If you have a soup, salad, or sandwich that you would like to share, just click on the Souper Sundays logo for all of the details. 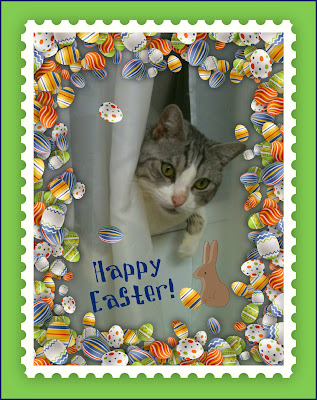 Max stuck his head out from his perch on top of the washer to say Happy Easter. He wouldn't wear any bunny ears though. ;-)
Have a happy, healthy week!