When I first moved to Hawaii, eleven years ago this month (Yikes! Has it been that long?!), it was hard to find ingredients for ethnic cooking outside of the Asia-Pacific countries. Over the years the selection has improved, and in Honolulu we now have access to an Indian/Middle Eastern market, a small Greek/Mediterranean shop (next-door to a favorite restaurant), and of course, Whole Foods stocks a great collection of diverse ingredients. My favorite place to wander through is the Latin Mercado that opened not long after I moved here. With the start of our six months of weekly cooking with Rick Bayless at I Heart Cooking Club, it seemed like a good time for a trip back there to scout for and purchase ingredients. 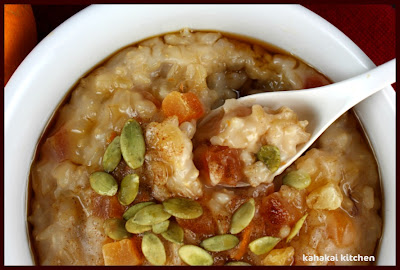 It was a fruitful trip, netting me fresh ingredients for this week and next, and a few pantry items for the future. For this week's Sweet Tooth theme, I headed right for the bin of piloncillo, the little cones of Mexican raw sugar. They are so cute (if sugar can be cute!), that I always stop and look at them, but with Rick's recipe for Arroz con Leche Clásico (Classic Mexican Rice Pudding with Cinnamon and Dried Fruit) in my head, I actually grabbed a couple of cones to take home and make Miel de Piloncillo (Mexican Raw Sugar Syrup) to drizzle over the pudding. 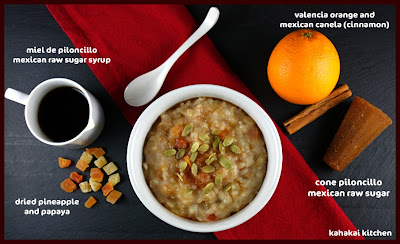 I used to think rice pudding was mushy and unappetizing, but I rediscovered it in the last couple of years and find that I quite like it when it is made with brown rice as the flavor is slightly nuttier, and the texture slightly chewier--both wins in my book. So, I adapted the rice pudding recipe from Mexico One Plate at a Time to use brown rice, slightly less sugar, and made it dairy-free (coconut milk makes a wonderful creamy sauce). While maybe not "classic" as the recipe name states, it was a creamy bowl of comfort food goodness all the same. 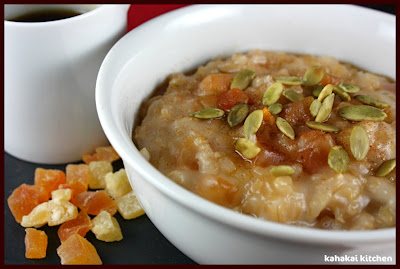 *My recipe changes are in red below

Step 1- Preliminary Rice Cooking:
Into a medium-size (3-quart) saucepan, measure 1 3/4 cups water. Add the cinnamon stick, orange zest and 1/2 teaspoon salt. Bring to a boil, cover and simmer over low heat 5 minutes. Stir in the rice, re-cover and cook until the rice is tender, about 20 minutes. Remove the cinnamon stick and orange zest. (Note: I put my brown rice in the rice cooker along with the orange zest, canela (cinnamon stick), and salt plus 2 cups of water, and cooked until done, about 40 minutes in my rice cooker.)

Step 2- From Cooked Rice to Pudding
To the pan add the milk and sugar. Set over medium to medium-low heat and simmer until the mixture just begins to thicken (it should look no thicker than heavy cream), about 15 to 20 minutes. Stir in the raisins or other dried fruit, and let cool for a few minutes. The pudding will thicken considerably as it cools. (Note: I added the cooked rice to a saucepan with the coconut milk, sugar and honey and brought to a simmer over medium heat. I then let it simmer about 40 minutes, stirring occasionally. I added the dried fruit and cooked about 15 minutes longer until the fruit was soft and the rice very creamy.)

Step 3- Serving the Rice Pudding
I think rice pudding is at its most delectable when it is slightly warm. I suggest you either serve it freshly made and still warm from the pan or reheat it in the microwave or on the stovetop, stirring gently to avoid breaking the grains. Spoon the rice pudding into a serving dish or individual bowls, dust with cinnamon or drizzle with the Mexican Raw Sugar Syrup and carry to the table. A wonderful, warm treat awaits. (Note; I served the pudding warm, dusted with ground cinnamon, drizzled with the sugar syrup and topped with a sprinkle of toasted pumpkin seeds for texture.)

Rick's Notes: Working Ahead: The pudding can be made a day or two ahead. Cover and refrigerate. Cold pudding may thicken into a stiff mass, but don’t worry: simply stir in enough milk to soften it up and you’re ready to complete the serving steps. Warm rice pudding is always a favorite. 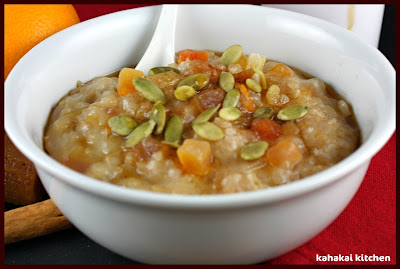 In a small saucepan, combine the piloncillo with 2 cups of water, orange zest, and anise seeds. Set over medium heat and bring to a gentle boil. Stir regularly until sugar cone melts completely, then maintain a gentle boil until the mixture has reduced to a syrupy consistency, about 20-30 minutes. Cool, then strain into a jar. Syrup will keep for several weeks in the refrigerator. 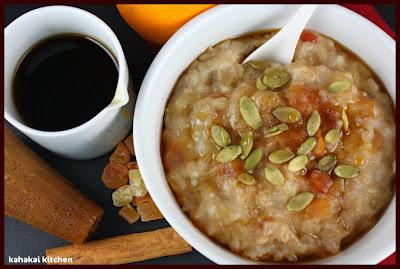 Notes/Results: So good! The orange and cinnamon flavor come through nicely and the rice is very creamy but still has a little bit of chewy goodness. (Plus if you can more than double the fiber in "dessert" to slow down the absorption of all that sugar--it makes it health food in my book!) ;-) I find making brown rice pudding with extra liquid helps the creaminess factor as it cooks so much longer. Another trick that I didn't use here (from Mark Bittman), is to "beat up" the brown rice slightly in the food processor before cooking to release more of the starches. (I'll try it next time and let you know!) I reduced the sugar because coconut milk tastes sweeter, the chopped unsulphured dried fruit I buy from my co-op is slightly sugared, and I was making the raw sugar syrup for drizzling--it would have been far too sweet with the whole 3/4 cup. Speaking of the Mexican raw sugar syrup--it's easy to make and the touch of orange and anise gives it a rich complexity. I like a little crunch with all that creamy and was going to put slivered almonds on top when it occurred to me to use toasted pumpkin seeds--perfect! Excellent when served, just as good when reheated for breakfast the next morning. I would make this again. 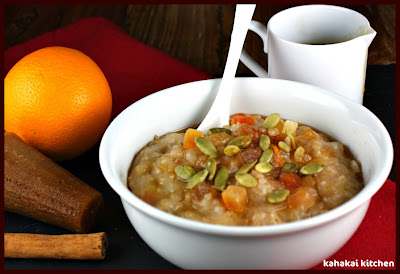 You can check out what the other IHCC participants made for their Sweet Tooth by going to the post here and following the links.