We are cooking with a new chef (Tessa Kiros) over at I Heart Cooking Clubs starting this week. If you aren't familiar with Tessa, pick up one of her six cookbooks and prepare to fall in love. Born in London, with a Finnish mother and a father of Greek-Cypriot origin, Tessa was raised in South Africa and then traveled the world learning about the food culture and traditions of each country she visited, before marrying and settling down in Tuscany. Her beautiful cookbooks span the globe and even before she was voted on as our chef for the next six months, I was busy collecting them. Although I have cooked a few dishes from some of the books, mostly I have been reading them and enjoying the gorgeous photography and I look forward to actually using them every week. 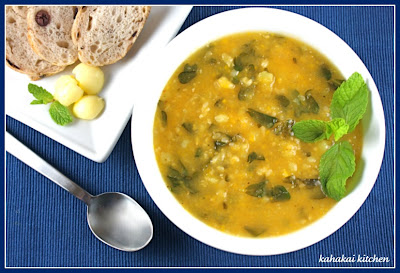 It was difficult choosing a recipe to make to "Welcome Tessa" to IHCC, but I knew I wanted to make a comforting, welcoming bowl of soup. I have had the Purslane Soup from her Piri Piri Starfish: Portugal Found cookbook tagged to make since I found the book online at a used bookstore a few weeks ago. I can get purslane at the farmers markets here and even Whole Foods carries it in their local produce section. Sometimes considered a weed, purslane has more omega-3 fatty acids than any other leafy been vegetable. It also packs in the plenty of vitamins and minerals and its leaves have a light lemony taste. I was struck by the unique combination ingredients in this soup--along with the purslane, there is chourico (chorizo), lemon, cinnamon, mint with potatoes and rice to make it creamy. 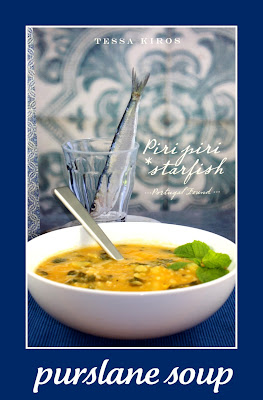 I couldn't make this soup completely local but the purslane, onion, carrots, mint, lemon juice, butter and macadamia nut oil give it a good lean in that direction. To add to the rice and potatoes in the soup and make it a complete starch-fest, ;-) I served it with some locally produced olive bread and sweet local butter. A satisfying and welcoming dinner. 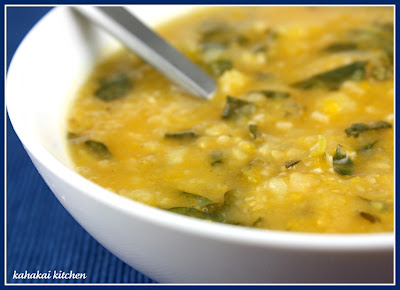 Kiros says, "My friend Peta remembers this from her summers in Portugal. The big part of mixed soup would be on the stove and, while it was boiling, Margarita would come in with bunches of wild leaves collected from the river bank. I loved the shape of the leaves drifting in this soup, and I liked the unfamiliar taste. For a deeper flavor here, use home-made chicken stock instead of water (like this, we have mixed two Portuguese soups into one, taking the mint and lemon that is usually in chicken canja)."

Heat the oil and butter in a large stockpot and sauté the onion until softened and golden. Add the carrot and chourico and sauté for a while longer until it smells good, then add the garlic and cook until you can smell it.

Add the wine and cook until almost evaporated. Add the potato, salt and a couple of twists of pepper, turning it through with a wooden spoon and sautéing for a couple of minutes more. Add 1.5 litres (52 fl oz / 6 cups) of hot water. Bring to the boil, lower the heat slightly, cover the pot and cook at a high simmer for 20 minutes or so. Remove from the heat.

With a slotted spoon, scoop out the potatoes into a bowl. Take out the chourico slices (you can eat them while you work.) Purée the rest of the pot, which won't seem much but will, funnily enough, take a while to purée until smooth. Mash the potatoes roughly in the bowl and leave on one side for now.

Add the rice to the pot and bring back to the boil, stirring with a wooden spoon to make sure it doesn't stick. Cover the pot and simmer for 10 minutes. Add the purslane or watercress and mashed potatoes, bring back to the boil, then simmer uncovered for another 10 minutes or so until the rice is just cooked. (Not too soft as it will carry on cooking in the pot until you serve.) Stir the thickened pup every now and then to make sure it is not sticking. Stir in the cinnamon, to taste, and the lemon juice. Serve hot, with mint leaves on top. 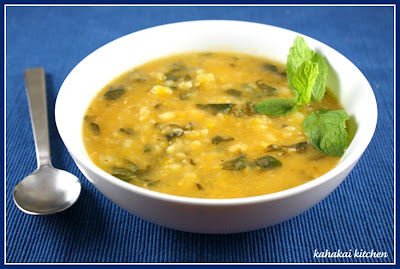 Notes/Results: A really good bowl of soup. The flavors really come alive. The slight lemony taste of the purslane is enhanced by the lemon juice and the cinnamon adds a complexity to the flavor--you don't taste the cinnamon, just its warm essence. The purslane in the soup is a bit like baby spinach and the rice and mashed up potatoes make it thick and creamy. I used a good garlic-veggie stock as my base and I kept in the chourico/chorizo because I had some to use up. If you want to make this a vegan soup, you cam omit the butter and replace the sausage with a little smoky paprika and a pinch of cayenne. Like the cinnamon, the sausage adds to the overall flavor so using the spices instead should give a similar effect. (Although I do love how she tells you to take out the chourico and eat it while you work as a little cook's treat) ;-) (One note on the sunny yellow color--I used some local baby carrots to equal one regular carrot and most of them were yellow rather than orange.) A bowl of this soup is warming and comforting, and much like Kiros' cookbooks, it transports me to another place--in this case the serene countryside of Potrugal. I would definitely make this again. 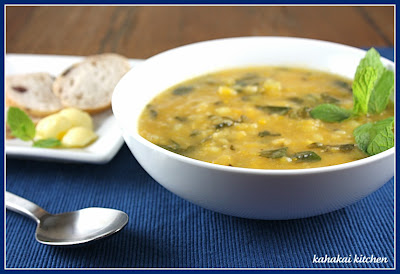 I am a day early with my "Welcome Tessa!" post this week but you can learn more about Tessa Kiros, see what my fellow IHCCers make for their welcome dishes, and maybe even join in the cooking club fun by going to the IHCC site and following the links.

It's a small but delicious set of dishes in the IHCC kitchen this week--let's take a look.

My friend Debbie from Hawaii Locavore and her husband have been successfully doing a month-long Eat Local challenge, the same challenge I am attempting to follow as much as possible this week. I admire their commitment and this amazing-looking Charred Eggplant Soup. Debbie says, "...this recipe was entirely local (except for spices), all the way down to Maui Pineapple wine and homemade Greek yogurt from local milk. We absolutely loved this soup. It was time-consuming because of all the grilling, but well worth it. Typical of eggplant it has a very meaty but creamy texture, but no bitterness at all. This is definitely a recipe we will be making again." 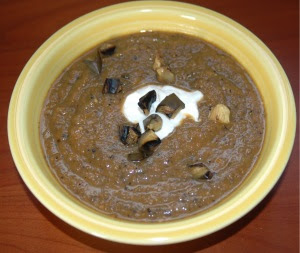 A new face to welcome this week. Say hello to Genevieve, a grad student and recent vegetarian who blogs out of Canada at Vanilla and Spice. Genevieve made this lovely Parsnip and Pear Soup and says, "I've officially made my first soup of the Fall season! When the weather starts getting cooler, I love to bring home root vegetables from the market, roast them in the oven, then purée them into a delicious and comforting soup. This soup was different than any I've ever made in the past. It combines parsnips with pears, resulting in a unique, slightly sweet taste with a hint of spice. Parsnips are a pretty neutral-tasting vegetable on their own (similar to carrots), but in this recipe they are roasted first, which brings out a deeper, sweeter flavour that paired nicely with the pear." Welcome to Souper Sundays Genevieve!" 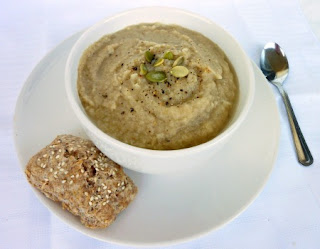 Janet from The Taste Space has two salads to share this week. First up this Sea Weeds and Greens Salad (aka Kelp Noodles with Wakame and Radish Sprouts). Janet says, "This salad had me giggling all night with its sheer deliciousness. It was light and bright from the lime, sweet but now overpoweringly so, sea-like with saltiness from the wakame, yet with an undertone of spiciness from the chili flakes and radish shoots. The cucumber and kohlrabi meld well with the slightly crunchy kelp noodles to highlight the sauce. Sometimes I wonder if my palate is changing, definitely less mainstream meat and potatoes, but this recipe from Ottolenghi is a keeper. Soba noodles would be wonderful here as well, as he originally suggested." 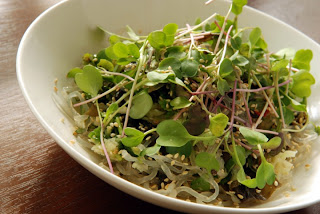 Janet's second salad is this colorful Warm Carrot and Flageolet Bean Salad with Dill. She says, "It is simple to make but the flavours work really well together. This is definitely where food synergy is at play. I added my own spins to the dish, adding more carrots, using less oil and no sugar. Instead, I opted to caramelize the shallots and carrots to capitalize on their natural sweetness. Slivered almonds confer a satisfying crunch. This salad tastes great fresh from the stovetop but also works wonderfully after a few days when the flavours have melded together even longer." 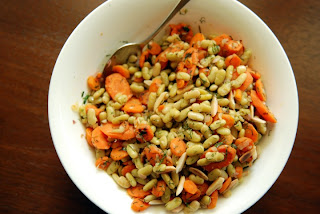 A short but sweet round up this week with some very creative and fun recipes--thanks to everyone who joined in. If you have a soup, salad or sandwich that you would like to share, just click on the Souper Sundays logo on the side bar for all of the details.

Have a healthy, happy week!