It occurred to me as I was about to make a slow cooker full of black bean soup that a good percentage of the recipes I have marked in cook books or put in my magazine cut out pile lately are for soup. I love soup--the different flavors, textures and how it is comfort in a bowl. Since fall is here (which just means a slight temperature drop and a tad more cloudy skies here--but I can still think about Fall!), my cravings for soup increase. Because of this I have decided to start "Souper Sundays" where for the next few months at least, I will make a weekly batch of soup and post it on Sundays. (It makes great lunches for the week). The recipes will be from cookbooks, magazines and my own "throw it together" creations. Anyone is welcome to join me in making soup for fall (or spring if you are reading this from the other side of the world). Soups, stews, chili (even "stroups" for you Rachel Ray fans) all count as soup in my book. You don't have to actually make it on Sunday but that's the day I am going to post. Very informal and casual--pop in whenever you want and if you send me a link to your soup post, I'll link to it from mine. 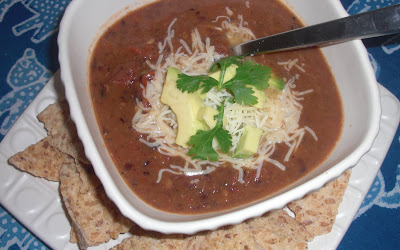 For my first Souper Sunday post, I am starting with Black Bean Soup from Fresh From The Vegetarian Slow Cooker by Robin Robertson. (I posted a few of the recipes from her Carb Conscious Vegetarian cookbook here, here and here). I have made this soup recipe before (pre-blog) and like the ease of throwing it all into the slow cooker as well as the combo of flavors in it. It also is pretty healthy and economical to make. 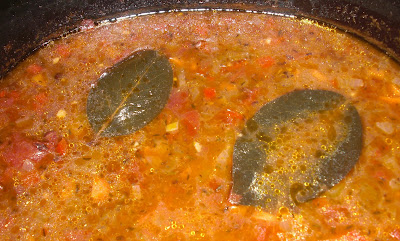 To thicken, puree at least two cups or up to one half of the soup solids with an immersion blender used right in the cooker, or ladled into a regular blender or food processor and returned to the cooker. Serve hot. Just before serving, stir in the lemon juice, if using. 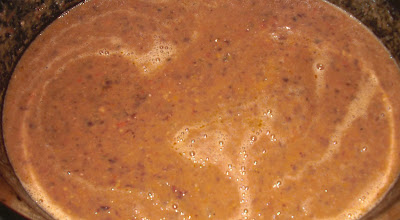 Notes/Results: I made just a couple of changes--I used a red pepper as I prefer them to green peppers, fire roasted diced tomatoes and a 1/2 tsp of chipotle chili powder in place of the cayenne pepper. I also squeeze in a bit of lime juice before serving rather than the lemon juice in the recipe. (BTW--the giant bay leaves you see are the ones from the Farmer's Market). You can leave the soup as is but pureeing half of it really enhances the texture. And if you don't have an immersion blender put it on your Birthday or Christmas list, mine is one of my favorite kitchen and soup making tools. I like to serve this soup with some cheese, avocado chunks, a bit of cilantro and one of my favorite chips. 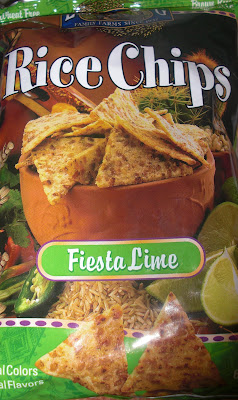 These are a gluten-free rice chip made by Lundberg Family Farms and they come in assorted flavors but my favorite is the Fiesta Lime. They are great crumbled in the soup. This soup is excellent as is or if you wanted to add some protein, you could put in some shredded chicken, turkey or some turkey sausage. 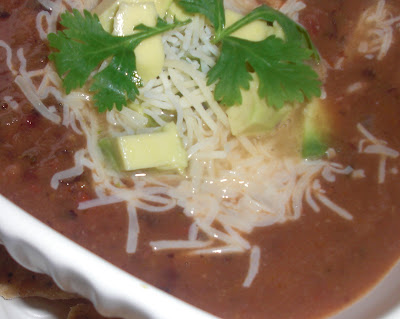 Next Souper Sunday, I'll be cooking the Tuscan White Bean and Garlic Soup from the newly published Giada's Kitchen. Come join me with a soup you love or having been wanting to try.
Posted by Deb in Hawaii at 5:58 PM