The Book Tour Stops Here: A Review of 'Paris Time Capsule' by Ella Carey, Served with a Recipe for Porcini Mushroom Risotto

Based on the way the weather is over most of the country right now, I realize I have absolutely nothing to complain about--but good golly I am tired of the constant heat and humidity that has taken over my usually temperate Hawaii weather. I have run my air conditioner more in the past six weeks than in the past six years combined. It has made me long for an escape and with the right book and the air turned on, I can almost believe I am somewhere else--somewhere cooler. Paris Time Capsule by Ella Carey is that right kind of book, one that can transport me to a different place and even back to a different time. It's an absorbing mix of historical fiction, romance, mystery, and travelogue, and it's today's TLC Book Tour stop. I am serving up my review of this novel with a bowl of Porcini Mushroom Risotto--a dish inspired by the book and one that conjures up fall--especially when enjoyed with the air con fully on. 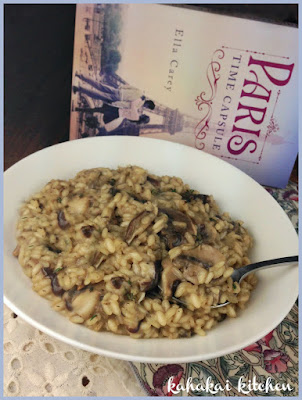 New York-based photographer Cat Jordan is ready to begin a new life with her successful, button-down boyfriend. But when she learns that she’s inherited the estate of a complete stranger—a woman named Isabelle do Florian—her life is turned upside down.

Cat arrives in Paris to find that she is now the owner of a perfectly preserved Belle Époque apartment in the ninth arrondissement, and that the Frenchwoman’s family knew nothing about this secret estate. Amid these strand developments, Cat is left with burning questions: What was Isabelle de Florian? And why did she leave the inheritance to Cat instead of her own family?

As Cat travels France in search of answers, she feels her grasp on her New York life starting to slip. With long-buried secrets coming to light and an attraction to Isabelle de Florian’s grandson growing too intense to ignore, Cat will have to decide what to let go of, and what to claim as her own. 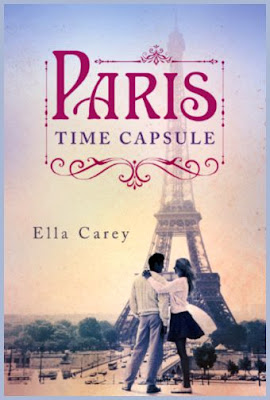 There are so many things to love about Paris Time Capsule--a chance to travel to Paris and the French countryside via the author's vivid descriptions, an absorbing combination of romance, mystery and historical fiction, and especially the fact that this novel is based on a true story. There actually was a secret apartment in Paris discovered in 2010. (You can see pictures of the real apartment here on the Paris Time Capsule website.) As in the story, the apartment was originally owned by Marthe de Florian, a French courtesan, and there was indeed a painting of her by Giovanni Boldini, a noted portrait painter of that era. Ella Carey's imagination created the story of Cat and the mystery of why the apartment remained unoccupied since World War II. I didn't actually see the pictures of the apartment's contents until after I read the book, but Carey described it so well that the pictures were almost exactly what I was imagining in my mind. It was easy to love Cat, the main character, and to covet her wardrobe and eye for style. There is the quintessential sexy leading man Loic to drool over--in addition to the descriptions of the Cat's clothing, the antiques, architecture, and all of the gorgeous scenery. It is a romance, so you read it knowing that there is a happy ending of some sort coming but I liked that there were some twists to the mystery about the apartment so the story itself wasn't predictable. After coming off some darker reads lately, Paris Time Capsule was a welcome change and a fun escape. If you are a Francophile and like some history and romance in your fiction, curl up with this book and some real hot chocolate in a French coffee bowl and enjoy! 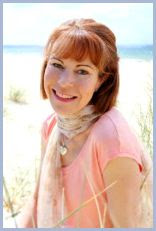 Author Notes: Ella Carey is a writer and a Francophile who can almost claim Paris as her second home. She has learned French since she was five and has degrees in music, majoring in classical piano, and in arts, majoring in modern European history and nineteenth-century literature.

Writing has always been Ella’s real passion, but she has worked in various other guises. As an emerging author, Ella has had her work published in The Review of Australian Fiction.
She has traveled to France more than a dozen times and drew on her many experiences there when writing Paris Time Capsule. Ella knew straight away that the fascinating true story of the abandoned apartment was a perfect fit for her, with its blend of history; impossible, decaying romance; and mystery–not to mention Paris. Ella released Paris Time Capsule as an indie book in 2014, and it rose to number 10 on Amazon in the US. This revised and extended edition is now released with Lake Union Publishing. A feature film screenplay version of the book is in development.

In her spare time, Ella walks her dogs along the beach, speaks her particular sort of Franglais whenever she can, reads, loves to visit art museums and collects every beautiful book on Paris that she can possibly find.  She is hard at work on her second novel, which is also set in Paris. Ella lives with her two children and two noble Italian greyhounds, which are constantly mistaken for whippets.

I actually expected more food presence in the book, always associating Paris and France with food, but there were certainly some classics to choose from such as cakes, French pastries, croissants, and baguettes with cheese and ham, market food stalls full of bright fruits, foie gras with spiced sauce and caramelized apples, lamb with herb sauce, and . a lunch of French Onion Soup. I was very close to making a meal that Cat shares with a helpful French family consisting of "a delicious crisp fillet of fish with tiny honeyed carrots, spinach, and a potato gratin." Cat made a mug of real hot chocolate with milk and dark chocolate that tempted me--but it's not the weather for it right now. It was risotto that finally inspired me when Loic takes Cat to dinner and they have the cafe's daily special--porcini risotto. Being both a risotto and a mushroom lover, I could not resist. 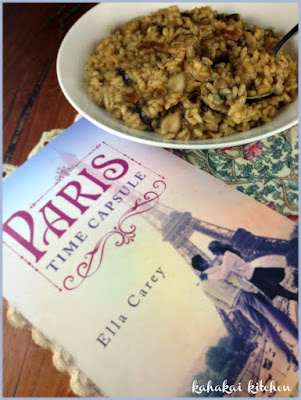 "The risotto was cooked to perfection. The woody taste of the porcini permeated the rice. Cat almost swooned over her first bite."
-Paris Time Capsule by Ella Carey

For my risotto, I most often prefer to just toss it together with a general 2 cups risotto rice to about 6 cups liquid, plus whatever else I want in there--in this case a mix of dried porcini, button mushrooms (they looked plump and fresher than the cremini at the store), and some shiitake for additional flavor and a different texture. Thyme and butter round out the flavor although you could sub in olive oil for the butter if you want a vegan version. Of course I had to have a fan blasting away to be able to find my zen happy place for the 30 minutes of stirring but it was well worth it. ;-) 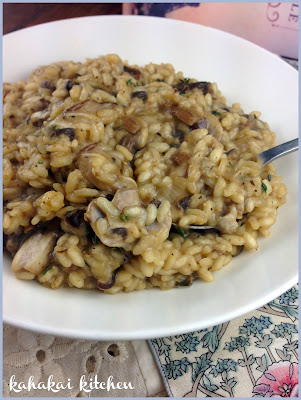 Chop dried porcini mushrooms into bite-sized pieces and place in a large bowl. Add 2 cups of boiling water, cover, and let sit for 30 minutes. Strain out mushrooms, saving liquid and set both aside.

Heat the reserved mushroom liquid along with 4 cups mushroom, veggie, or chicken broth in a medium saucepan until just at a boil. Reduce heat and keep at a simmer.

Meanwhile place 1 tablespoon of the olive oil into a stockpot or dutch oven and heat over medium heat. Add the onion and cook for 5-6 minutes, stirring, until onions are softened and translucent. Add the garlic and cook for another minute or two. Add 1 tablespoon of the butter and the thyme to the pot, along with the button mushrooms. Cook over medium heat for 4-5  minutes. Add the shiitake mushrooms and the reserved re-hydrated porcini minutes and cook for another couple of minutes until the mushrooms have released most of their moisture and are lightly browned but not "mushy." Remove the mushroom-onion mixture from pot, cover and set aside.

In the same stockpot (no need to wipe it out after removing mushrooms), heat the remaining 2 tablespoons of olive oil over medium heat. Add the rice and stir until it is well coated with the oil and starts to turn opaque. Stir in the white wine and cook until it evaporates.

Using a ladle, add a ladle-full of the hot broth to the rice and cook, stirring gently, until the liquid is absorbed. Follow the same process, adding the remaining broth a ladle at a time and stirring until the liquid is absorbed. Continue to cook and gently stir, letting the rice absorb each ladle of broth before adding more. (This should take about 20-25 minutes depending on your rice.) Once rice is creamy, but still just slightly firm, it is done.

Gently stir the reserved cooked mushrooms into the rice mixture, along with the remaining tablespoon of butter. Taste for seasoning and add salt and freshly ground black pepper as needed. Serve  immediately, garnished with extra fresh thyme leaves. If you want to add cheese, top risotto with shredded cave-aged Gruyere or Parmesan.

Notes/Results: This ended up being such a wonderfully mushroomy and creamy risotto. I tried an imported risotto rice (Campanini Vialone Nano) that I found in the gourmet section of a local grocery and it was so much better than the risotto rice I have been using. Much spendier (about $6 for the 16 oz box) but such large gorgeous grains that cooked up beautifully and held their shape well. When it's a for-company risotto or one like this, that I don't plan to add cheese to, I would definitely invest in this rice again. The dried porcini mushrooms are a bit of an investment as well but their intense nutty flavor adds much to the dish and you get the bonus of using the liquid to pump up the flavor of the broth. Although I tried this risotto with some shaved Gruyere on top, it didn't need it and was rich and decadent on it's own. Very swoon-worthy--I would definitely make this again. 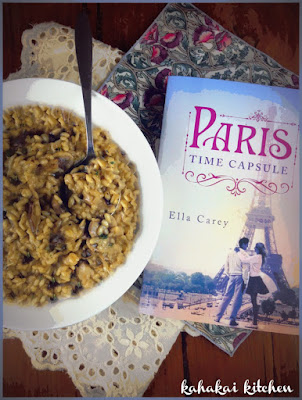 Note: A review copy of "Paris Time Capsule" was provided to me by the publisher and TLC Book Tours in return for a fair and honest review. I was not compensated for this review and as always my thoughts and opinions are my own.