The Book Tour Stops Here: A Review of "The Captive Condition" by Kevin P. Keating, Served with a Recipe for "The Red Death" Cocktail From the Book

On today's TLC Book Tour stop, I am reviewing The Captive Condition, a novel in the mix of literary fiction, horror, and black comedy by Kevin P. Keating. Along with the review, I am serving up The Red Death, a potent cocktail from the book (and more than one on these could certainly put you into a red fog at least). 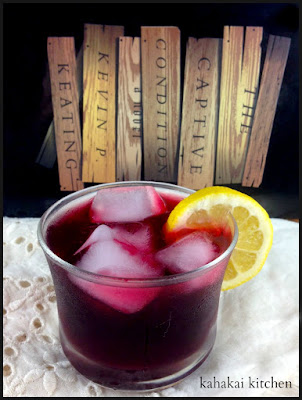 From a thrilling new voice in fiction comes a chilling and deliciously dark novel about an idyllic Midwestern college town that turns out to be a panorama of depravity and a nexus of horror.

For years Normandy Falls has been haunted by its strange history and the aggrieved spirits said to roam its graveyards. Despite warnings, Edmund Campion is determined to pursue an advanced degree there. But Edmund soon learns he isn’t immune to the impersonal trappings of fate: his girlfriend, Morgan Fey, smashes his heart; his adviser, Professor Martin Kingsley, crushes him with frivolous assignments; and his dead-end job begins to take a toll on his physical and mental health. One night he stumbles upon the body of Emily Ryan, an unapologetic townie, drowned in her family pool. Was it suicide or murder? In the days that follow, Emily’s husband, Charlie, crippled by self-loathing and frozen with fear, attempts to flee his disastrous life and sends their twin daughters to stay with the Kingsleys. Possessed by an unnamed, preternatural power, the twins know that the professor seduced their mother and may have had a hand in her fate. With their piercing stares, the girls fill Martin with a remorse that he desperately tries to hide from his wife. Elsewhere, a low-level criminal named the Gonk takes over a remote cottage, complete with a burial ground and moonshine still, and devises plans for both. Xavier D’Avignon, the eccentric chef of a failing French restaurant, supplies customers with a hallucinogenic cocktail. And Colette Collins, an elderly local artist of the surreal, attends a retrospective of her work that is destined to set the whole town on fire.

Kevin P. Keating’s masterly novel delves into the deepest recesses of the human capacity for evil. 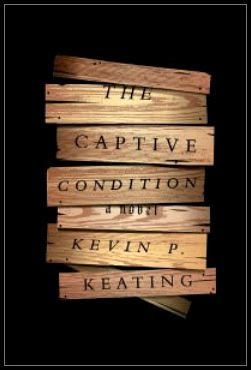 The Captive Condition is a tough book to put into one genre--it is smart, darkly humorous, more creepy and atmospheric rather than scary horror, and there are certainly some mystery, suspense and paranormal elements woven in. Normandy Falls is not the town you want to hang out in--and if you did you would surely want to drink and take hallucinogens frequently, as many of the characters seemed to. The Midwest college town and its citizens are offbeat and not very likable. There is a tense mix of locals and the college/academic crowd, it's a 'dry' town that has many buying illegal substances and moonshine from the back alleys, and there some very strange and unsavory characters--especially The Gonk. None of the characters we are introduced to would make my list of friends and fun people to spend time with. There are some spooky children--especially a set of eight-year old twins that give off a strong The Shining twins with an ADHD-vibe. While I usually need a character or two that I can like to both relate to and root for, I didn't really mind not having one here--it made it easier to sit back and enjoy their antics and the repercussions. What did distance me from the story and bogged down the first half of the book for me was the complex vocabulary and overabundance of detail that the author used. I truly love words; I scored fairly high on the vocabulary section of the SAT and I like 'big' and descriptive words in the right amount. For me, The Captive Condition employed so many complicated words and detailed descriptions that it made me concentrate more on the words themselves rather than the actual story, making my attention frequently wane. Maybe if I read an e-copy on my Kindle where I could get an immediate definition when there was a word I wasn't familiar with, I would have been able to appreciate the story more and not be so distracted. For some reason, (whether I picked up the rhythm of the writing or enough imagery was established that Keating leveled off a bit--I'm not sure), I got into the story and cruised happily through the second half as the pace picked up and more chills and action took place.

Probably not every one will find The Captive Condition to their liking. It wasn't quite what I was expecting based on the publisher's description. I enjoyed the dark humor of the book and certainly the promised depravity was there, but I didn't get the "dark nexus of horror" as described. There were interesting twists to the story and good suspense. For readers who like the Gothic, enjoy detailed descriptions, have an interest in words and/or a more sophisticated vocabulary (or a ready dictionary), and like dark and macabre humor, it will appeal. 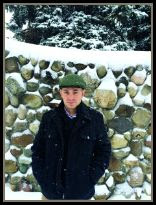 Author's Notes: After working as a boilermaker in the steel mills in Ohio, Kevin P. Keating became a professor of English and began teaching at Baldwin Wallace University, Cleveland State University, and Lorain County Community College. His essays and stories have appeared in more than fifty literary journals, and his first novel, The Natural Order of Things, was a finalist for the Los Angeles Times Book Prizes’ Art Seidenbaum Award for First Fiction. His second novel, The Captive Condition, will be released by Pantheon Books in July of 2015. He lives in Cleveland.
Connect with Kevin on Twitter.
-----

There's not a ton of appetizing food happening in The Captive Condition. Most of it comes from the town's bistro Belleforest, where the chef proprietor Xavier slugs back his jazar juice (a jazar is a small red carrot from North Africa according to the book)--a potent blend of carrot juice and chemicals, while peddling it, and other illegal substances, out the back door. But really there was no question about what dish to make inspired by my reading--it had to be The Red Death. It seemed to be the town's signature cocktail; brought back from Delacroix Cay, a remote island in the Caribbean that figures into the book in a few different ways. There is also a recipe for it in the book. 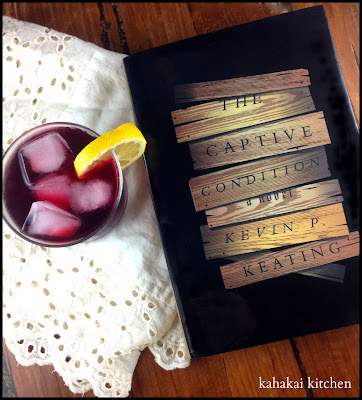 I do not have a ready supply of grain alcohol or moonshine, and typically I am not a big fan of it since my dreaded Everclear punch days in school, so I modified the recipe and used vodka. Otherwise I made the recipe below, including the doubling of the alcohol noted. ;-)

The Red Death
From the bulletin board of Emily Ryan via The Captive Condition by Kevin P. Keating
(Serves 1) 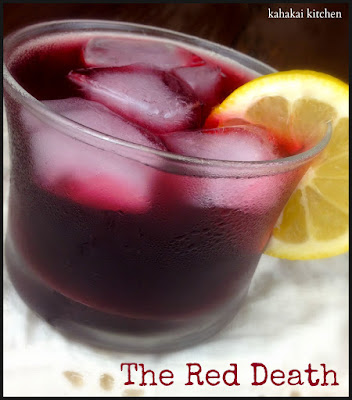 Notes/Results: Surprisingly good--a nice combination of sweet and tangy with a good kick. Potentially could be dangerous as it goes down smoothly and is refreshing. It would be pretty easy to suck more than one of these down and suffer my own red death from it later. I would make it again--probably with the vodka as I have no intention of "seeing the Gonk" for grain alcohol. ;-) 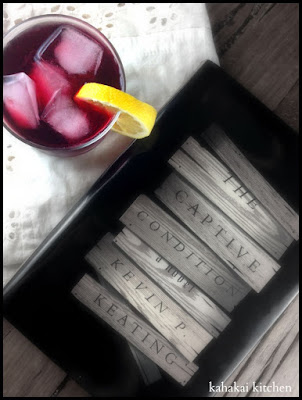 Note: A review copy of "The Captive Condition" was provided to me by the publisher and TLC Book Tours in return for a fair and honest review. I was not compensated for this review and as always my thoughts and opinions are my own.