The Book Tour Stops Here: A Review of "A Line of Blood" by Ben McPherson, Served with a Boozy Whiskey Affogato

I'm happy to be a stop on the TLC Book Tour for A Line of Blood by Ben McPherson, a darkly suspenseful mystery/thriller. The focus of this book is a family that looks relatively normal from the outside but is actually full of secrets and issues. Yep, below the surface this family is pretty much a hot mess, so accompanying my review is a bit of a cold mess--a scrumptious and boozy Whiskey Affogato, inspired by my reading. 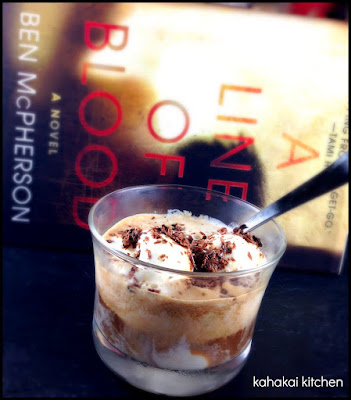 Whose secrets cut deeper?
Your family’s.

Whose secrets do you fear?
Your neighbor’s.

Whose secrets can kill?
Your own.

For Alex Mercer, his wife, Millicent, and their precocious eleven-year-old son, Max, are everything—his little tribe that makes him feel all’s right with the world. But when he and Max find their enigmatic next-door neighbor dead in his apartment, their lives are suddenly and irrevocably changed. The police begin an extremely methodical investigation, and Alex becomes increasingly impatient for them to finish. After all, it was so clearly a suicide.

As new information is uncovered, troubling questions arise—questions that begin to throw suspicion on Alex, Millicent, and even Max. Each of them has secrets it seems. And each has something to hide.

With the walls of their perfect little world closing in on them day after day, husband, wife, and son must decide how far they’ll go to protect themselves—and their family—from investigators carefully watching their every move . . . waiting for one of them to make a mistake.

A Line of Blood explores what it means to be a family—the ties that bind us, and the lies that can destroy us if we’re not careful. Highly provocative, intensely twisty and suspenseful, this novel will have you wondering if one of them is guilty—or if all of them are—and will keep you on edge until its shocking final pages.

You will never look at your loved ones the same way again. . . 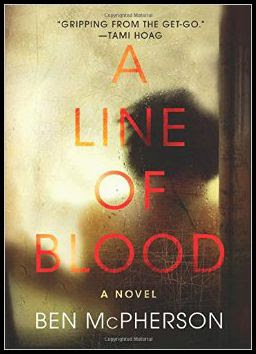 The Mercer family, Scottish Alex, his American wife Millicent, and their eleven-year-old son Max live fairly comfortably in the North London neighborhood of Finsbury Park (which the locals refer to as "Crappy"--due to the dodgy parts). One evening Alex and Max climb into the neighbor's yard looking for Foxxa, their cat, and end up following her into their neighbor's house where they discover him--very dead--in his bathtub. The body is on lurid display and Alex does not react fast enough to prevent Max from seeing it--something that is a common thread in the book as Max constantly sees, hears, and is told far too much for his young years. What looks like a suicide turns into a murder investigation, with Alex at the top of the suspect list. As the police investigation continues, secrets surface, including an especially damaging one about the relationship between the neighbor and Millicent. Soon it's more than Alex under suspicion and his marriage and life keep unraveling with each turn of the page.

This is one of those books that a lengthy story explanation would spoil some of the intricate twists and turns of the plot so I am not going to go into a lot of detail. It's best just to say that if you like psychological thrillers with a dose of dark family drama you will want to read A Line of Blood. I found myself engrossed in the story from the start and full of tension while reading it. Part of the tension came from the storytelling--McPherson does an amazing job of building the drama, reeling me in, convincing me I had it figured out, then continuously casting lines out in other directions and making me doubt my conclusions. The story is told from Alex's point of view and it's not clear how reliable he is and so it is easy to cast suspicion on everyone. The generally creepy vibe that surrounds this family makes it possible to believe that any one of them could be involved in their neighbor's death. The other area of tension was from the characters themselves--no one was really likable for various reasons and I really wanted to smack Alex and Millicent for their lack of maturity and parenting skills. They have an eleven-year-old son that they seem to treat partially as a peer and partially as an afterthought. They live in a little house where they can hear almost everything going on within their house, yard, and nearby neighbors' houses, yet the conversations, fights, and actions they take seem oblivious to the fact that anyone can hear them--especially their son. Any nap or nighttime sleep seemed to be fair game for all manner of inappropriateness to come out. In addition to what Max might have witnessed, as the marriage implodes Alex in particular shares too many details with his son, and the fact that Max is a master manipulator, sets up even more issues and more family breakdown. McPherson manages to keep the dysfunction and craziness to just this side of reality though, so even if these aren't characters you know (or want to know), they still ring true. Complex and off-kilter, A Line of Blood kept me up past my bedtime and made my blood pressure elevate.

-----
Author Notes:  Ben McPherson is a television producer, director, and writer and for more than ten years worked for the BBC, among other outlets. He is currently a columnist for Aftenposten, Norway’s leading quality daily, and lives in Oslo with his wife and two children.

For my book-inspired dish, it seemed like most of the food mentions were simple meals,  breakfasts, and beverages--particularly coffee and alcohol. I decided to combine those two ingredients with the ice cream, chocolate, and milkshakes Max liked and make a Boozy Whiskey Affogato. An 'adults only' drink/dessert, but somehow I imagine Max would have been given some--or found a way to get it himself. ;-) 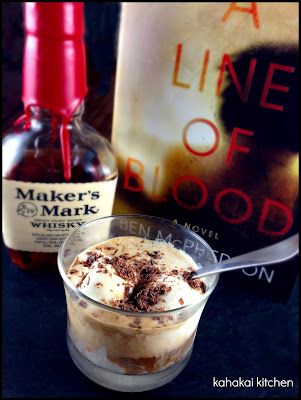 Whiskey seemed to be in constant supply in the story. It would have likely been an Irish whiskey in the Mercer household, but since I had good Kentucky bourbon/whiskey on hand, that's what I used. 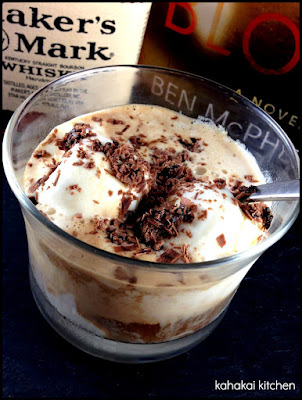 An affogato (Italian for 'drowned') is a coffee dessert, usually consisting of a scoop of gelato or ice cream topped with a shot of hot espresso and sometimes a shot of liqueur. The espresso melts the ice cream into a creamy and delicious spoonable or drinkable mess. It really doesn't require a 'recipe' but this is what I did below. ;-)

Scoop ice cream into cup or glass. Pour whiskey on ice cream, then top with the hot espresso and sprinkle with chocolate shavings. Serve immediately. 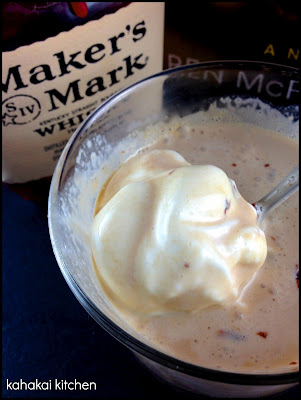 Notes/Results: All of the important food groups are represented here: ice cream, coffee, alcohol, and chocolate-so what's not to like?! I have never been a huge whiskey flavor fan but it works well with the coffee and ice cream--very much like an Irish coffee only better. You can sub in any alcohol or liqueur you like--spiced rum, Kahlua, Frangelico, Amaretto... Prepping the glasses of ice cream ahead of time and letting the ice cream scoops get very frozen will make it melt slower but make sure your espresso/coffee is made at the last minute so it is very hot and very fresh. Decadent, messy and a bit dangerous--a pretty perfect dessert. ;-) 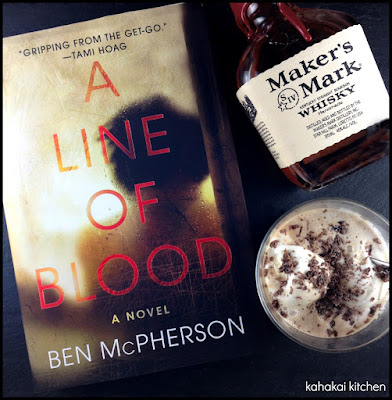 Note: A review copy of "A Line of Blood" was provided to me by the publisher and TLC Book Tours in return for a fair and honest review. I was not compensated for this review and as always my thoughts and opinions are my own.