The Book Tour Stops Here: A Review of "Again and Again" by Ellen Bravo, Served Up with a Jacques Pépin Recipe for Crab Cakes with Red Sauce

Today's TLC Book Tour Stop features two of my favorite things--a good book that makes me think and some tasty crab cakes that make me drool. I am reviewing the debut novel Again and Again by Ellen Bravo and serving my review up with a plate of Jacques Pépin's Crab Cakes in Red Sauce, inspired by my reading. 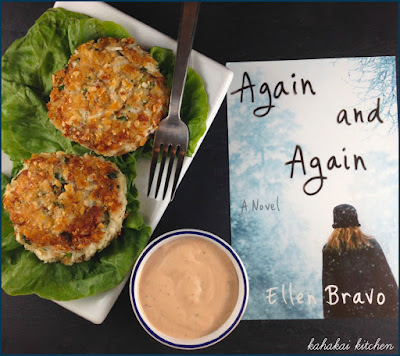 Deborah Borenstein has come a long way since 1978, when she left Cleveland for college in upstate New York to seek sophistication and “a world that matters.” Thirty-two years later in Washington, D.C., Deborah is making a difference for women who’ve been traumatized and stigmatized by rape as the director of an influential activist group, Breaking the Silence. She’s still happily married to her post-college sweetheart, a political consultant, and delighted to be a mom to her spirited teenage daughter. Suddenly, her world is shaken—by searing memories of what happened three decades earlier at her alma mater, Danforth University. A tenacious reporter storms in on Deborah, seeking confirmation of an anonymous source exposing William Quincy, former college dreamboat and current contender for Senator, as a college rapist.

Could Quincy, a pro-choice Republican supported by women, feminists included, be guilty of that brutal crime? Deborah knows, because she caught him in the act of committing it. Still, she owes a debt to Quincy’s victim: her college roommate, Elizabeth Gombach. A small town Midwestern nice girl, with wit and smarts, Liddie paid dearly for “letting herself” get raped and then—at Deborah’s urging—daring to press charges against her well-connected, well-off rapist. Deborah is wary of reopening old wounds—Liddie’s and her own.

Will Deborah move beyond a past of pain and guilt? Can she reconcile her commitment to speaking out against rape with saying nothing to stop a rapist from winning the Senate? What loyalty does she owe her husband, who is trying to resurrect his flagging career by getting a win for Quincy’s opponent? The answers will test her as a mother and a feminist and a friend. Taking on hot-button issues from sexual violence on campus to the male domination of politics, Again and Again is a gripping novel about a topics that are all too pervasive in the real world. 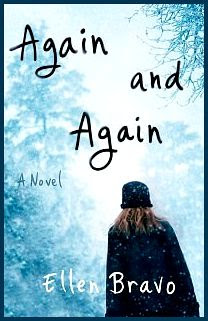 Again and Again is a powerful book with an interesting story and a moral dilemma with no easy answers for the main character. Deborah is in the middle of a tangled web with the people and things she holds dear surrounding her--Liddie and their friendship, her husband and family life, her job and her feminist ideals, her own emotional state and the after-effects of the trauma and guilt she has from her friend's rape and how it was dealt with. Any direction she turns Deborah, or someone she loves, loses something. The intense pressure placed on her by her husband and colleagues doesn't help. I was so disappointed in her husband Aaron, who pushed his own agenda (while claiming it was mostly for the common good) to the detriment of his wife and especially to Liddie. His jealousy, negativity and unsympathetic view of Liddie throughout the years and especially each time he asked Deborah when Liddie "was going to get over it" made me truly want to throat punch him.

One only has to turn on the television or read the news to see that there has not been much evolution regarding how rape is handled and how rape victims are treated, especially on college campuses. I never really thought about the term "date rape" not being part of the vernacular until into the 1980s which was interesting to contemplate. (Although the fact that it got a name and the acknowledgment that it is just as much of a crime as being assaulted by a stranger has not drastically impacted how it is dealt with.) The author knows her activism and politics and it shows in the details of the book. The story goes back and forth in time from when Deborah and Liddie meet at college and the rape and it's aftermath in 1978, to the present day (2010), and the years in between with glimpses at Deborah's career and her relationships with Liddie and her husband. At 256 pages, it's a fairly short book and I would have enjoyed more pages with a deeper dig into the other characters (particularly Liddie and Deborah's daughter Becca), but the author still managed to cover a lot of ground and detail that made the story ring true.

Again and Again will definitely make you angry, it will make you think about what you would do if you were in Deborah's place and there was not a clear "right" answer, and it will make you want to hand it to every college-bound young woman (or man) you know. Finally, it will make you turn the pages--eager to get to the end to learn the resolution, and you will still be thinking about it long after the last page is turned.

Author Notes: Ellen Bravo is the head of Family Values @ Work, a network of state coalitions advocating family-friendly policies, and an award-winning writer. Her award-winning nonfiction books include Taking on the Big Boys, or Why Feminism Is Good for Families, Business and the Nation. A Cleveland native, she makes her home in Wisconsin.

I found  myself more intrigued by the story than looking for food inspiration in Again & Again, but there was food included in the story. The kringle (a Scandinavian pastry made by Liddie's mom) was a particular favorite of Deborah's and it sounded pretty tempting. There were the Sunday blueberry pancakes enjoyed by Deborah's family in happier days, yogurt, granola and berries for breakfast, Indian food and takeout tilapia curry and rice noodles, egg salad and tuna and avocado sandwiches, oatmeal cookies, cake, and rugelach.

It was a dinner meeting between Deborah and her colleague Amanda Pruitt, the head of a large feminist organization, that brought me my book-inspired dish with mention of the "golden brown and massive" crab cakes that they shared. Few things are better than a good crab cake and I had been meaning to make the Crab Cakes in Red Sauce by Jacques Pépin for some time now. Once I saw them mentioned in the story, I knew I had to make them. 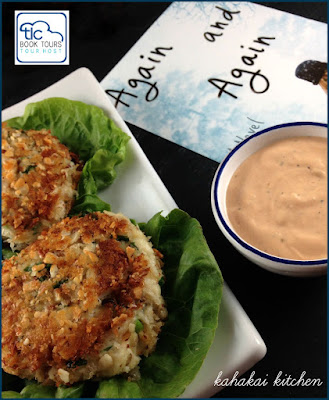 Jacques Pepin says, "When a few guests pop in unexpectedly, try this quick dish made from pasteurized crabmeat and a few pantry ingredients. If you use fresh crabmeat, the crab cakes will be even better and more delicate." 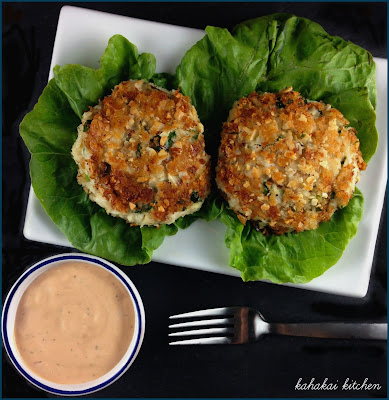 Make the sauce by combining all the ingredients in a bowl. Set aside.

Put the crabmeat in a bowl and add 2/3 cup of the breadcrumbs, scallion, cilantro, garlic, mayonnaise, Tabasco, and salt. Mix lightly, just until the ingredients are well combined.

Put the remaining breadcrumbs in a food processor with the almonds and process until the nuts are well chopped and combined with the bread.

Form the crab mixture into 4 patties, then dip each patty into the crumb mixture until it is coated on all sides.

Heat the oil in a nonstick skillet over medium heat and arrange the patties next to one another in the pan, handling them gently because they are soft. Cook for about 3 minutes on each side.

To Serve: Divide the sauce among four plates. Place a patty in the center of the sauce on each plate, sprinkle some chives on the sauce, and serve immediately. (Or, serve the sauce on the side) ;-) 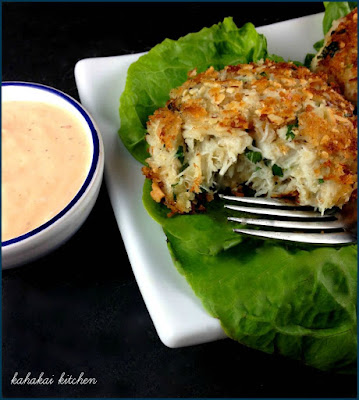 Notes/Results: These are a great example of a good crab cake--bountiful crab, crispy on the outside while tender on the inside, flavorful without losing the delicate sweetness of the crab, and partnered with a very lickable and zippy sauce. I love the crunch that the ground almonds added to the crust--it kept even the leftovers fairly crisp the next day. The cilantro, garlic and dash of Tabasco added flavor but did not overpower. I kept the mayo in the crab cakes as a binder (they held together really well) but swapped it out for Greek yogurt in the sauce to make it lighter. Some of the tastiest crab cakes I have had in a while and quick and easy to make, I will definitely make these again. 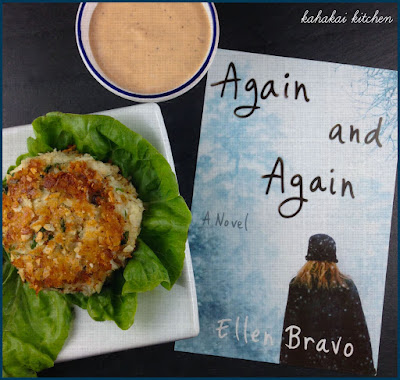 This post is being linked to I Heart Cooking Clubs where this week's theme is La Plat du Jour (or Dish of the Day), whatever recipe we decide is the Jacques Pépin dish of the day at our house. You can see what recipes everyone made by checking our the picture links on the post. 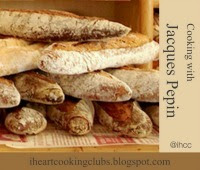 Note: A review copy of "Again and Again" was provided to me by the publisher and TLC Book Tours in return for a fair and honest review. I was not compensated for this review and as always my thoughts and opinions are my own.