From TLC Book Tours:
"Newly arrived in Seattle, Darlene Barnes stumbles on a job ad for a cook at the Alpha Sigma Phi Fraternity on the University of Washington, Seattle, campus, a prospect most serious food professionals would automatically reject.  But Barnes envisions something other than kegs and corn dogs; she sees an opportunity to bring fresh, real food to an audience accustomed to “Asian Surprise” and other unidentifiable casseroles dropped by a catering service.  And she sees a chance to reinvent herself, by turning a maligned job into meaningful work of her own creation: “I was the new girl and didn’t know or care about the rules.” 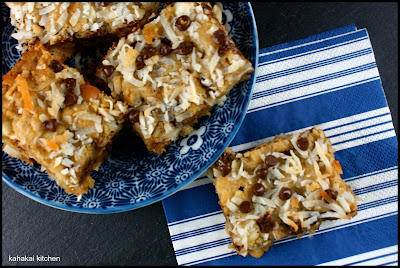 Being a "frat cook" was not in Darlene Barnes life plan. A mostly stay-at-home mom while her two sons were growing up, taking on various jobs some food-related and some not while they were high school, before becoming a private chef for a rich Dallas family, Barnes moved to Seattle when her husband took a job with Microsoft wanting to do something and have a career of her own. Seeing an advertisement for sorority chef at the University of Washington, (which she didn't get), Barnes was told by a chef friend to "bring food" when she applied for chef at the Alpha Sigma Phi fraternity. She was hired and spent the next six years cooking and caring for her guys. "Hungry: What Eighty Ravenous Guys Taught Me About Life, Love , and the Power of Good Food" is Darlene Barnes first book and a fun and engaging foodie memoir. 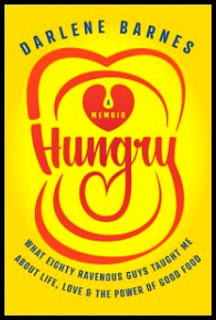 Hungry breaks down Darlene's experiences in the initially dumpy and rat-infested fraternity kitchen, learning to cook in large quantities and finding meals that her boys would eat since most of them grew up on "Pop Tarts and Kraft Dinner." Not wanting to rely on the processed meals the college food purveyors were pushing, she brings in whole foods whenever possible and has to learn how to order appropriately. The kitchen stories are widely entertaining but as Chapter 5's title says, "It's More Than Food"--Darlene finds herself caught up in the lives of the guys and the inner-workings of fraternity life and what she thinks will be a short-term gig, turns into six years. Those years are full of ups and downs, laughter and loss, with some "tough love" thrown in and the author describes it well--you feel her love and most definitely her frustration with them, building a growing attachment in me for her and the supporting "characters"--her band of frat boys.  Hungry will appeal to any foodie, lover of memoirs, those who spent time in a fraternity or sorority or those who want to read about what happens behind the scenes in one. (You can win your own copy of this book below and check out the rest of the reviews at the TLC Book Tour post here.) 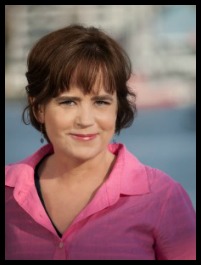 Author Notes: Darlene Barnes has been food and word passionate all her life, cooking professionally for the last eleven years.  Born in the New Orleans area, she spent most of her pre-college years in London, eventually moving to Canada with her husband and graduating from Queen’s University with a BA in English.  Since 2006, she has cooked for the men of Alpha Sigma Phi fraternity on the University of Washington campus in Seattle, offering fresh food, tough love and largely unsolicited advice to her college age customers.  She has blogged about her experiences at www.hungryboys.net and now at www.darlenebarnes.com; she lives with her husband in Seattle, where her two grown sons also reside. 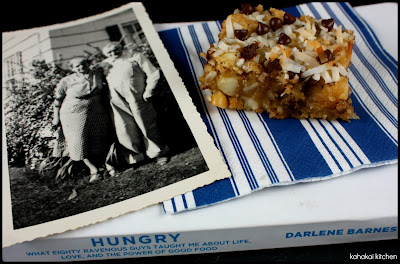 I jumped at being on this Book Tour because first and foremost, I love a good foodie memoir. The second reason is that my grandmother on my dad's side was a fraternity cook at the University of Oregon for several years in the mid to late 1950's and I loved the correlation. I don't know a lot about my grandmother's experience--she died when I was pretty young, but I do know that she was well-liked by her "boys" who called her "Cookie" and that when she stopped cooking full-time for the fraternity, she opened up her house and took on university students as borders to help make ends meet. Somewhere there exists at least one picture of the group signed to "Cookie" that I wish I could have found before this post. 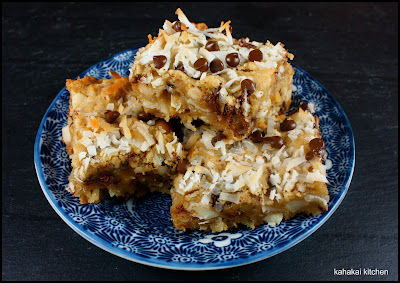 As for a dish to make inspired by the book, there were plenty to choose from. Author Barnes includes plenty of recipes in the book for everything from salad dressings--one of the things she decided to make from scratch rather than use the "gallon tubs of weirdly gelatinous metallic food service salad dressings" that were the norm for the school, to pimento cheese, blueberry cornbread and even a rub for a pig roast. I especially loved a hilarious passage where Barnes gives a simple recipe concept for ratatouille to one of her former students that she got back with dozens of questions written into it from when to preheat the oven to what dish to serve it in and the back and forth between the two. The dish turned out well and impressed his vegetarian girlfriend.

At the end of the day, the book reinforces that food and the act of cooking and feeding someone (or eighty someones) is the way we show we care. When one of the fraternity brothers dies falling out a window, dealing with her devastated boys--many who had not faced the death of anyone close to them before, leaves Darlene making Coconut Blondies from the current month's Gourmet magazine to leave for the guys, telling a friend that, "I didn't know what I could do, that I only new how to cook..." That passage moved me and I decided to look online to find that Gourmet magazine blondie recipe and adapt it a bit to what I had on hand. 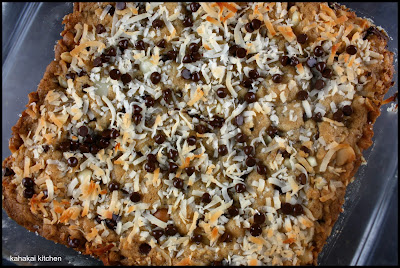 
Melt butter in a 3-qt heavy saucepan over low heat, stirring, until smooth. Remove from heat and cool to lukewarm. Whisk in brown sugar and vanilla. Whisk in eggs 1 at a time until mixture is glossy and smooth.


Whisk together flour, baking soda, and salt, then whisk into butter mixture. Stir in pecans and 1 1/2 cups coconut.


Spread in pan and sprinkle with remaining 1/2 cup coconut. Bake until a pick inserted in center comes out clean, about 35 minutes. Cool completely.

Notes/Results: Soft, buttery, rich and extra moist from the coconut with just a hint of the smoky sea salt I sprinkled on top to contrast all that sweetness. I subbed in toasted macadamia nuts for the pecans and added some mini vegan dark chocolate chips because ... well, why not?! ;-) Not the healthiest treat out there but instead of trying to make them healthier, I made a half-batch and gave most of them away. A good blondie now and then is good indulgence for the soul and this is a good one. I would make them again, with my changes. 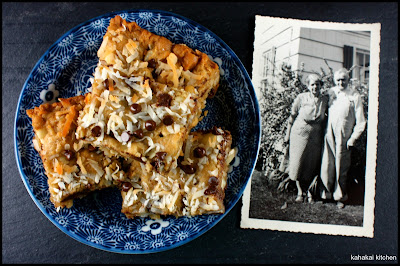 You can win your own copy of this fun, foodie memoir! To enter, just leave a comment on this post telling me about your favorite "student meal when you were in high school, college, or just starting out on your own. Were you a starving student existing on boxed mac 'n cheese & ramen noodles or were you already a foodie?!

Leave your comment (+ a way to contact you) no later than 11:59 PM (Hawaii Time) on Monday, September 9th. One winner will be drawn from all applicable entries and announced by Wednesday, Sept 11th. Must be in the U.S. or Canada to win

Note: A review copy of "Hungry" and a copy to give away to one of my blog readers were provided by the publisher and TLC Book Tours in return for a fair and honest review. I was not compensated for this review and as always my thoughts and opinions are my own.