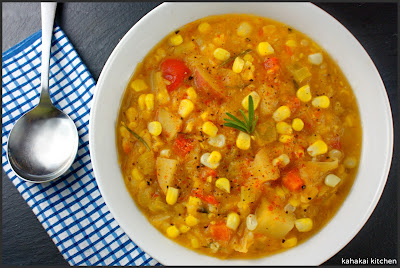 For many people the Labor Day holiday weekend represents "the end" of summer--back to school. the weather starts to cool down, Halloween candy and decorations start popping up in the stores. That doesn't mean that the grill has to be put away though--especially with a copy of Grills Gone Vegan by Tamasin Noyes on your cookbook shelf. I have been slowly cooking from this book over the summer before finally getting around to reviewing it and making this smoky and sweet, packed with veggie goodness Roasted Corn Chowder. Thick and satisfying with the pureeing of the roasted vegetables standing in for milk or cream and white wine, rosemary and smoky paprika adding plenty of flavor, it's a great way to keep summer going. 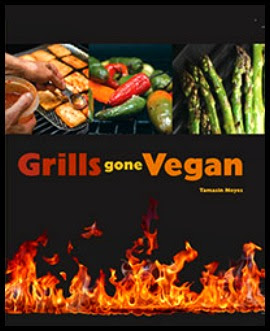 Grills Gone Vegan says: "A generous amount of white wine adds depth and richness to this chowder, while the grilled vegetables give it wonderful body. It freezes well too providing a happy reminder of the best of summer's produce in other seasons." 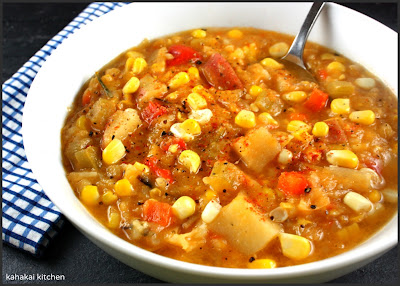 I made a few subtle changes, mostly in preparation, noted below in red.

Outdoor Cooking Method:
Preheat outdoor grill to medium-high heat. Put leeks, potatoes, bell pepper, celery, oil, garlic, paprika, rosemary, and pepper in a deep 13 x 9-inch foil roasting pan. Stir until the vegetables are evenly coated with the oil and spices. Put the pan on the grill and cook, stirring occasionally, until fragrant, about 3 minutes. Decrease the heat to medium-low and stir in the wine. Cook, stirring occasionally, until the vegetables are tender, about 20 minutes.

Put the vegetables and any liquid in the pan in a food processor. Add the broth and lemon juicer and process until smooth. Add the corn and pulse a few times; some of the corn should remain in kernels, so don't process until smooth. Transfer to a large saucepan and heat on the grill over medium-low heat, stirring occasionally, until steaming, about 10 minutes. Ladle the chowder into four bowls. Drizzle with 1 tablespoon of the barbecue sauce (if using).

Indoor Cooking Method:
Preheat oven to 500 degrees F. Put the leeks, potatoes, bell pepper, celery, oil, garlic, paprika, rosemary, and pepper in a deep 13 x 9-inch non-reactive baking pan and stir until vegetables are evenly coated. Bake for 10 minutes, add the wine, stir, and bake for about 10 minutes longer (it took mine about 20 minutes), until the vegetables are tender. Process, heat and serve as directed above.

(Note: I like a really chunky chowder so after following the above Indoor Cooking Method, to process, I removed about 2 cups of the vegetables and set aside with 1/2 my corn. I also took out one of the leek halves and chopped it up and set aside. I placed the remaining vegetables and liquid, the stock and lemon juice into the blender and pureed until slightly smooth. I then added the blender contents and the vegetables I set aside to a pan and heated until warm. Adding a little more pepper and some salt to taste.)

Preparing Roasted Corn:
To prepare the corn, remove most of the husks, leaving just the last few layers surrounding the kernels and keeping them attached to the stalk. If time permits, soak the corn in cold water for 40 minutes, this will provide extra moisture as the corn cooks. Corn can be used immediately or stored in a ziplock bag in the refrigerator for up to 4 days.

Outdoor Method: Preheat an outdoor grill to medium heat. Put the corn on the grill and close the lid. Cook, turning occasionally, until marked all over and the shape of the kernels is visible through the husks, about 30 minutes.

Indoor Method: Preheat oven to 350 degrees F. Put the corn directly on the oven rack and bake for about 30 minutes, turning once, until the kernels become visible through the husks.

Note: Grills Gone Vegan says: "Frozen corn can also be used. Put the corn in a dry cast-iron skillet over medium-high heat and cook, stirring occasionally, until browned, about 8 minutes." 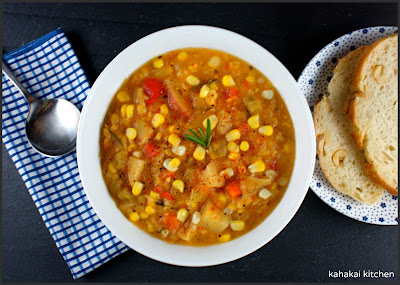 Notes/Results: This vegan chowder is filling and full of good flavor. The smoked paprika gives it the "meatiness" that bacon or ham would in a regular chowder and although it isn't as creamy as a dairy-filled chowder, it is still thick and rich. I used the indoor method of cooking, and although there are a few steps--roasting the corn ahead of time, chopping, blending, etc., once things are in place, this soup goes together quickly. I left out a couple of cups of the veggies to make my chowder more chunky--the way I like it. I also omitted the barbecue sauce as I am not a fan--can I be kicked out of the U.S.A. for that? ;-) You could leave out the dry white wine and put in more veggie stock, but the it certainly added more depth. Served with slices of garlic bread, it made a great light dinner. I would make this again.

Other recipes that I "Road-Tested" from Grills Gone Vegan:

Grilled Guacamole: A simple mix of grilled red onion, garlic, and chipotle chile combined with avocados that have been halved, pitted and seared on the grill. The avocado flavor is heightened and the red onions sweetened, making this guacamole even more addictive and convincing me that all guacamole should start with avocados that have spent at least a few minutes with a grill pan. 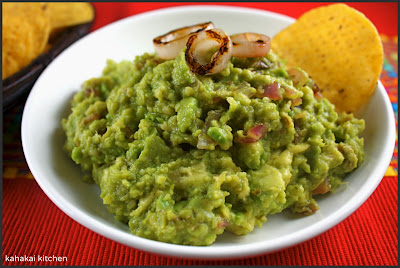 Charred Leek Spread with Dill on Baguette Rounds: An elegant little appetizer that will please carnivores and vegans equally. Charring the leeks gives them such a great caramelly sweetness that partners well with the dill and the tangy green apple slices. 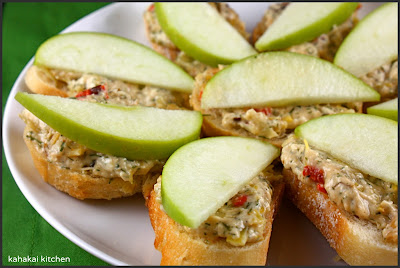 Cashew Ranch Sauce: Deb's dirty little food secret--I sometimes crave vegan "chicken" nuggets. Not sure why because I never craved regular chicken nuggets when I ate meat. But there it is... you know my shame. To accompany some spicy buffalo-style nuggets and Alexia Seasoned-Potato Puffs (put on this earth to tempt me), I whipped up the simple vegan sauce. I feel a bit bad about posting this one because for some unexplained reason, I tossed the parsley and thyme into the blender with the other ingredients rather than stirring them in afterward, making the sauce a strange greenish color. The taste was still great though--this is a tangy, rather than sweet ranch dressing, which I like. 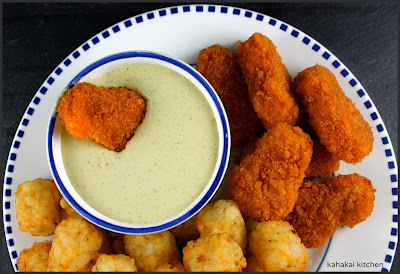 Grills Gone Vegan is packed full of interesting and crowd-pleasing recipes. The recipes are written clearly and the fact that it includes both indoor and outdoor grilling methods make it appropriate for anyone to use all year round. Paperback, with a few sets of inserts of color photos of key recipes, there are helpful tips throughout for grilling, stocking a pantry and vegan cooking along with menu suggestions and a glossary of less familiar ingredients. This cookbook is different enough to bring new recipes and ideas to hard core and experienced vegans, but still appeal to anyone trying out the lifestyle, wanting to feed veg-friendly friends or family, or just wanting to reduce their meat intake but still have fun at the grill. 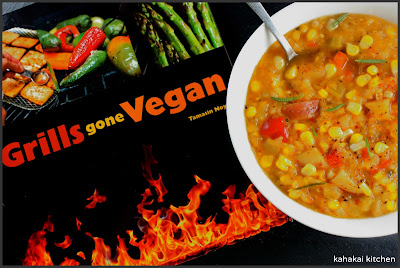 Note: I received a copy of this cookbook from the publisher, however I received no monetary compensation to review it. As always, my thoughts, feedback and experiences cooking from it are entirely my own.

Let's check out the Souper Sunday's kitchen where we have a few good friends and their fabulous dishes waiting.

Judee of Gluten Free A-Z Blog has a cool take on corn chowder with this Chilled Fresh Corn Chowder with Fennel. She says, "I usually have company (my family)  for Friday night Sabbath dinner.  Last night I served this soup as a starter and everyone loved it. It's chunky, very flavorful, and filling. It's nutritious with the avocado and other fresh veggies that it could be a satisfying meal in itself, but I assure you everyone ate the rest of the meal." 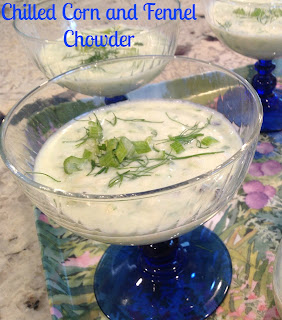 Graziana of Erbe in Cucina is back with this pretty Peas Salad with Mint. She says, "This year I'm growing spearmint: it has the fresh aroma characteristic of all varieties of mint, delicate yet persistent, with no wild aftertaste. I used spearmint and basil for this salad, that can be served as a side dish but can be considered a full meal served with bread or breadsticks." 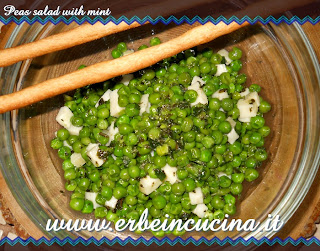 Simona of briciole shares this Rattlesnake Bean Salad and says, "Each pod of Rattlesnake bean is marbled purple in a unique way, like a sheet of marbled paper. The farmer celebrates singularity in each bean, just as the marbler does in each sheet of paper that he or she peels off from the water, rinses and then dries to reveal the pattern created. Freshly picked beans beg the dressing hand for a light touch. A vinaigrette is all that's needed. As I like my beans soft rather than crunchy, I offset the beans' tenderness with toasted sliced almonds. My nasturtium-infused vinegar is perfect in this vinaigrette as it adds a hint of spiciness that brightens the beans' sweet flavor." 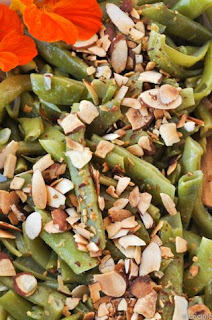 Thanks to everyone who joined in this week. If you have a soup, salad or sandwich that you would like to share, just click on the Souper Sundays logo on my side bar for all of the details.

Have a happy healthy holiday weekend and week!