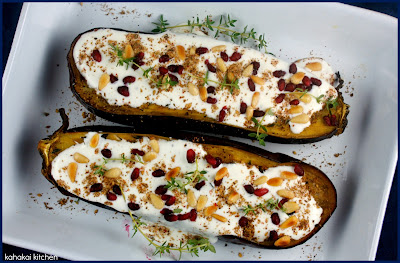 I have been wanting to make Yotam Ottolenghi's Eggplant with Buttermilk Sauce for quite some time. Partly because it looks so darn pretty as the cover of Plenty, partly because I love a good eggplant dish.

I didn't always love eggplant. We weren't an eggplant-eating family that I can recall--probably due to my dad. I'm am guessing that he wasn't a fan, in which case it wouldn't get a rotation on the meal menu. I don't remember exactly where I was when I first had it but, I do remember eating a really bad Eggplant Parmigiana early on in my eggplant experiences. It was mushy, with soggy breadcrumbs and no flavor and that pretty much sealed the deal with me and eggplant for many years. I couldn't understand why people would even want to eat the stuff. I'm not sure when it changed but I think it was when I moved to Oahu with a plethora of Asian dishes with long, skinny Japanese eggplant in them on every menu. Then I had some well cooked eggplant dishes--Moussaka and Baba Ganoush from my favorite Mediterranean restaurant, Ratatouille, and a delicious Eggplant Parmesan Tartine at a favorite lunch spot. My loathing for eggplant turned to liking then finally to love. 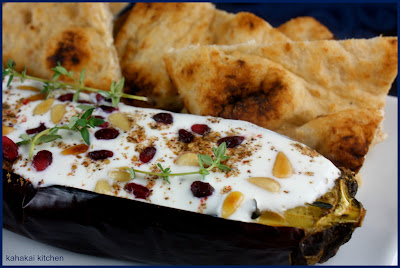 That made eggplant the perfect choice for this week's I Heart Cooking Clubs theme: "You Made Me Love You"--ingredients that that over the years, we have come to love or at least like. This simple dish features roasted eggplant flavored with thyme, topped with a creamy yogurt-buttermilk sauce and sprinkled with flavorful za'atar spice blend and tangy pomegranate seeds. Spooned onto some whole grain naan bread, it makes a quick and easy starter or a light dinner.

I made a few changes to the recipe--noted in red below. 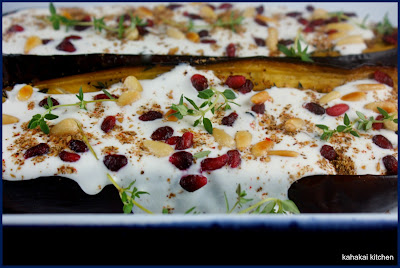 Otttolenghi says, "I can't think of a more rustically elegant (is that a contradiction in terms?) starter. Serve with some robust white bread or pita and you are, literally, in foodie heaven. In the recipe you'll find Sam Tamimi's technique for getting the seeds out of the pomegranate, which I am afraid now is a very well-known secret."

Cut the eggplants in half lengthways, cutting straight through the green stalk (the stalk is for the look; don't eat it). Use a small sharp knife to make three or four parallel incisions in the cut side of each eggplant half, without cutting through to the skin. Repeat at a 45-degree angle to get a diamond-shaped pattern.

Place the eggplant halves, cut-side up, on a baking sheet lined with parchment paper. Brush them with olive oil—keep on brushing until all of the oil has been absorbed by the flesh. Sprinkle with the lemon thyme leaves and some salt and pepper. Roast for 35 to 40 minutes, (I roasted for 45 minutes) at which point the flesh should be soft, flavorful and nicely browned. Remove from the oven and allow to cool down completely.

While the eggplants are in the oven, cut the pomegranate into two horizontally. Hold one half over a bowl, with the cut side against your palm, and use the back of a wooden spoon or a rolling pin to gently knock on the pomegranate skin. Continue beating with increasing power until the seeds start coming out naturally and falling through your fingers into the bowl. Once all are there, sift through the seeds to remove any bits of white skin or membrane.

To make the sauce. Whisk together all of the ingredients. Taste for seasoning, then keep cold until needed.

To serve, spoon plenty of buttermilk sauce over the eggplant halves without covering the stalks. Sprinkle za'atar and plenty of pomegranate seeds on top and garnish with lemon thyme. (I also added some toasted pine nuts for texture.) Finish with a drizzle of olive oil. (I omitted the last drizzle of olive oil and cut down the rest of the olive oil by about 1/2) 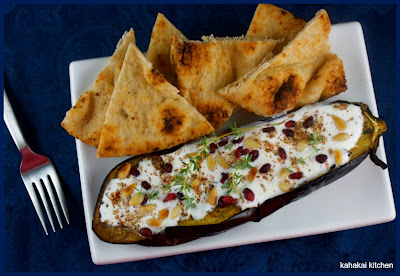 Notes/Results: I love the flavors in this dish. The eggplant is soft and creamy and the sauce is cool and tangy. With the slightly tart pomegranate seeds and the crunch of the added pine nuts, it is delightful spread on warm naan bread. I did cut the olive oil down by half--proportionally for the half-batch of the recipe that I made. More oil is more decadent, but I didn't feel like I needed the extra fat and calories and I don't think the dish suffered any reducing the amount. One thing I would also reduce next time is the amount of buttermilk in the dressing. I made the full amount and feel that 9 tablespoons of the buttermilk made the sauce too thin--next time I will cut it down to 4 or 5 so it has a thicker consistency. Since pomegranates have not made an appearance here yet, I used some frozen seeds/arils I had on hand. They are not as pretty as fresh seeds when defrosted but the taste is still good. I liked the leftover pine nuts that I tossed on top--the crunch was nice with the creaminess of the dish. This was easy to make and tasted great. I will definitely make it again. 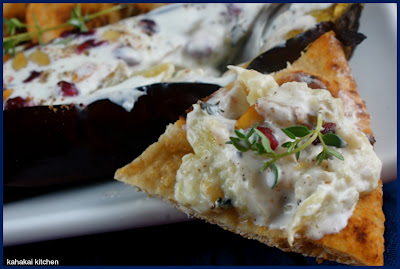 You can check out what ingredients the other IHCC participants have learned to love by going to the "You Made Me Love You" post and following the links. 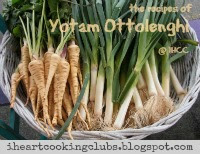 ***"Hungry"--Giveaway Winner***
The randomly drawn winner of a copy of "Hungry: What Eighty Ravenous Guys Taught Me About Life, Love, and the Power of Good Food" by Darlene Barnes is Janet of The Taste Space who said, "My favourite meal in university was a black bean and salsa soup. So easy... I should make it again :)" Congratulations Janet! Email me with your shipping address and I'll have your copy sent to you!