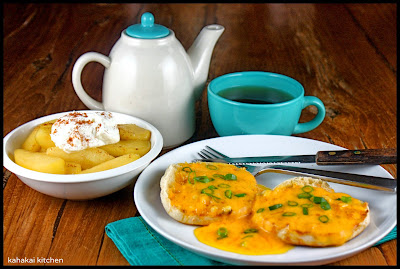 Toast, (based on the autobiography Toast: The Story of a Boy's Hunger by British Chef Nigel Slater), is our Food 'N Flix movie pick for September, hosted by Anne-Marie of This Mama Cooks. Toast is the ultimate in foodie films, telling of the journey of a young boy who "never ate a vegetable that didn't come out of a can" to a talented and award winning chef. Slater's mother was not a good cook, boiling most every (canned) dinner item in a pot on the stove and relying on toast when meals inevitably did not turn out. As much as she loves him, neither his mother or his gruff and closed-off father, understand Nigel's obsession with cookbooks and the fresh cheese case at the local grocery. Nigel's mother's asthma and lung disease cause her death while he is young and his father finds solace in the chain-smoking, pie-baking house cleaner, Mrs. Potter. He marries her and Nigel divides his time between loathing his new stepmother, trying to figure out the recipe for her lemon meringue pie, and battling her--through cooking--for his father's love.

The movie has humor--mostly from the always over-the-top Helena Bonham Carter as Mrs. Potter. It's also moving--I found myself wanting to give young Nigel (Oscar Kennedy) and teenage Nigel (Freddie Highmore) a big hug throughout the movie, and his father, a big kick.  The Dusty Springfield soundtrack and retro food and costumes create the perfect 1960's setting, and Slater himself even appears at the end as a chef at the Savoy Hotel who hires teenage Nigel for the hotel's kitchen. This is a film any foodie will love. 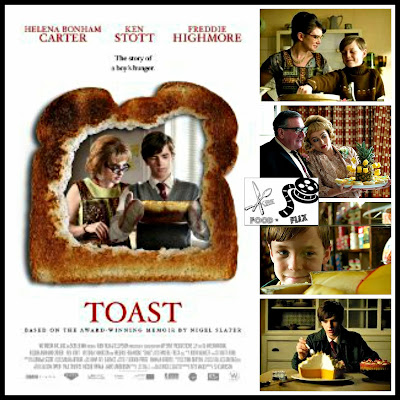 "No matter how bad things get, it's impossible not to love someone who made you toast. Once you've bitten through that crusty surface, to the softer underneath and tasted the warm salty butter, you're lost forever."--Young Nigel Slater

There is plenty of food inspiration in Toast like--buttered toast, cheese on toast, mincemeat, apple and lemon meringue pies, meat pies, ham, veggies and other things that do not belong in a can, young Nigel's failed cooking attempts like spaghetti Bolognese and broiled smoked haddock, fun retro British party foods and the scones, shepherd's pie and trifle teenage Nigel cooks in "Domestic Science" class (Home Ec.). I looked to the handful of Nigel Slater cookbooks in my collection for inspiration and found my dish in Real Fast Food: 350 Recipes Ready-to-Eat in 30 Minutes by Nigel Slater.

In the recipe notes for Hot Cheese Muffins, Nigel Slater says, "My mother died when I was quite young. My father was left with the daunting task of feeding a somewhat finicky child. Apart from vast quantities of fruit and vegetables (even spinach), there was very little I would eat. His greatest and possibly only, success was this simple dish. Needless to say, he soon gave up and installed a housekeeper, of whom I shall say no more." It captured the "toast is love" angle as well as a way to give comfort to young Nigel with a cup of tea after school. The Apples with Butter & Sugar from the same book were an add-on, simply because it is fall and nothing says Autumn comfort like warm and sweet apples. 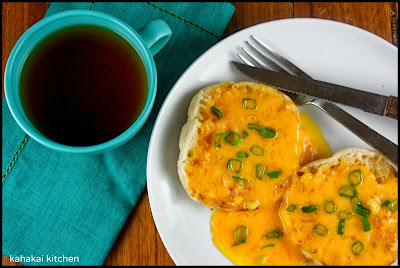 Melt the butter in a small heavy-based pan over a low heat. Add the chopped scallions and fry until soft and slightly golden in color. Stir in the grated cheese and let it melt slowly over a low heat. Slide the whole lot onto toasted muffins and eat while still very hot. 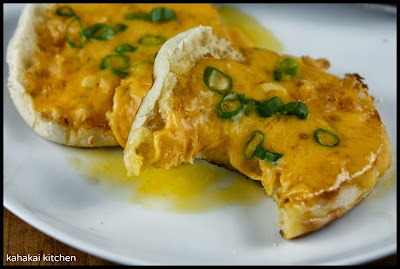 (Slater adds that you can also: Spread the muffins with homemade pickle relish or chutney before you coat with the molten cheese or Sandwich the muffins together with crisp bacon.) 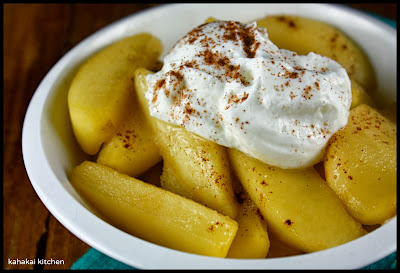 Peel, core and slice the apples into 8 pieces. Melt the butter and add the apples and sugar as soon as it starts to foam. Cook the apples until they are soft and golden, about 5-7 minutes. 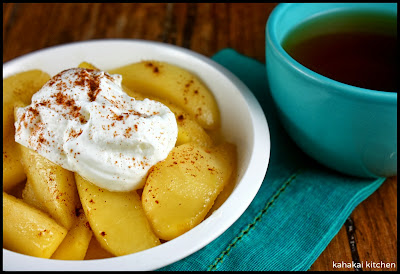 Notes/Results: Cheese, butter, sugar--what's not to like?! This is just basic comfort food or "nursery food" (comfort food you ate as a child growing up) as it is often called in the U.K. The Hot Cheese Muffins are rich and gooey with the cheese mixture melting into the little nooks and crannies of the English muffins. I used just a bit of butter to saute the green onions and it was plenty (the Tillamook cheddar I used was rich on its own) and I tossed a little of the green scallions on top for a bit of color contrast. These are best eaten piping hot and just picked up and eaten by hand with lots of napkins for the extra cheese and buttery liquid that comes out. I also reduced the butter and sugar in the apples, feeling like the tea/snack was indulgent enough already. For both flavor and appearance, I topped the sauteed apples with a blob of non-fat Greek yogurt and a sprinkle of cinnamon. Served warm they are a lovely little treat for fall. With the tea, it all makes for a good lunch or afternoon snack when you are in need of a little comfort and indulgence--not something to eat often but nice on occasion! ;-)

The deadline for this month's Food 'N Flix is Monday, September 30th. If you missed this round and love food, movies and foodie movies, join us for October when we will be viewing A Good Year with Russell Crowe, hosted by Tina at Squirrel Head Manor.