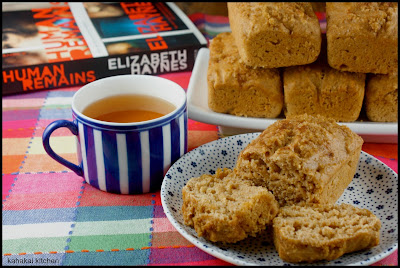 CREEPY. Given one word to describe "Human Remains" by Elizabeth Haynes, it would have to be creepy. Other words that come to mind...suspenseful, disturbing, intriguing  and chilling. And, very, very creepy. Well, I like creepy and when I heard the synopsis of the book, I immediately jumped to be a stop on this TLC Book Tour.

From the Back Cover:
"Police analyst Annabel wouldn’t describe herself as lonely. Her work and the needs of her aging mother keep her busy. But Annabel is shocked when she discovers her neighbor’s decomposing body in the house next door, and she is appalled to think that no one, including herself, noticed the woman’s absence. Annabel sets out to investigate, despite her colleagues’ lack of interest, and discovers that such cases are frighteningly common in her hometown.

A chilling thriller and a hymn to all the lonely people whose individual voices haunt its pages, Human Remains shows how vulnerable we are when we live alone, and how easily ordinary lives can fall apart when no one is watching." 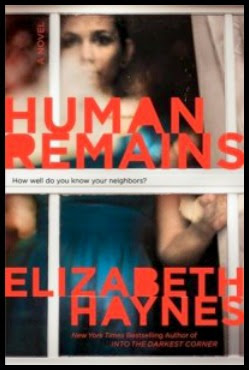 After Annabel stumbles onto her neighbor's body she does some research while at working at her analyst position for the police department and finds that in the borough surrounding her town there have been a remarkable amount of similar instances--decomposed corpses, different ages, sexes, and walks of life found in their homes. 24 bodies in the first nine months of the year in fact, more than the previous seven years combined. The deaths appear to be due to natural causes and the police don't start seeing it as a problem until Annabel and a young newspaper reporter start investigating and the local newspaper starts up a "Love Thy Neighbor!" campaign in order to get people to check in and connect with the people in their community. The story is told alternatively by Annabel, living alone, not really connected to anyone besides her cat, running errands for her near-invalid mother and facing her own demons and depressions and, the person who may be "helping" these people along in ending their lives. (I don't want to go into a lot of detail because the plot unfolds so well throughout the book.) Hauntingly, we also hear from the victims, telling their stories and giving insight into what led them to their final days.

To me the best, scariest thrillers are those that feel real--that the plot is something that could actually happen. "Human Remains " is exactly this kind of novel--author Haynes weaves a dark tale, full of quiet but intense suspense. Although there are not any big shockers or twists in the book, the feeling of dread that she creates speeds the story and the tension along. This is the second book I have read by this author, I was on the Into the Darkest Corner tour last year. I like this book even better. The characters are well-written--Annabel has hidden depths from the sad sack she appears to be, and the villain has such an air of (creepy) righteousness in his beliefs and actions--it is fascinating to get inside his head. This is definitely not a book for the squeamish--it is very descriptive in the state of the bodies, the process of decomposition and a few other things that contribute to a high "ick" factor. But, the graphic descriptions are part of what makes this book so absorbing, so if you love a well-written thriller that will keep you up and don't mind the "gory details"--it won't disappoint.

Author Notes: Elizabeth Haynes is a police intelligence analyst, a civilian role that involves determining patterns in offending and criminal behavior. She is also the New York Times bestselling author of Into the Darkest Corner and Dark Tide. She lives in England in a village near Maidstone, Kent, with her husband and son. 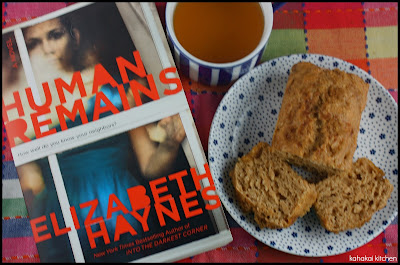 Being that this is primarily a food blog, it is my habit to make a recipe inspired by the book as part of my book review. For some books it is easy. "Human Remains" made it a bit more of a challenge. Although food (and plenty of cups of tea) appears in the book, this isn't a book that makes you hungry--it's a bit too disturbing for that--a shower seems like a much better idea than a meal. A character does serve tea and apple cake to guests and that seemed like the kind of food that comforts and settles the emotions--needed for this thriller.

Make this easy quick bread in mini-loaves to enjoy with a cup of your favorite tea and take a few with you when you stop by and check on your neighbors! ;-) 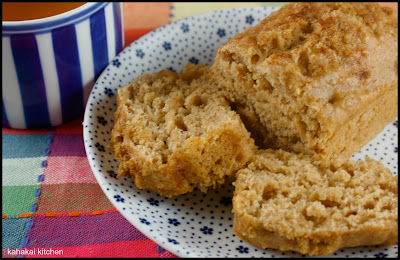 I looked for an apple cake recipe, thinking I would make it into muffins but found this recipe for Cinnamon Applesauce Bread on the McCormick spice site and decided to make mini-quick breads instead. I made a few changes, marked in red below.

Beat egg in medium bowl. Stir in applesauce, brown sugar, milk and oil. Add to flour mixture; stir just until moistened. (Batter will be lumpy.) Stir in 1/2 cup of the walnuts and raisins if using. Pour batter into 9x5-inch loaf pan sprayed with no stick cooking spray. Sprinkle top evenly with remaining 1/2 cup walnuts if using.

Bake 55 to 60 minutes or until toothpick inserted in center comes out clean. (I baked my mini loaves about 30 minutes.) Cool in pan 10 minutes. Remove from pan; cool completely on wire rack. 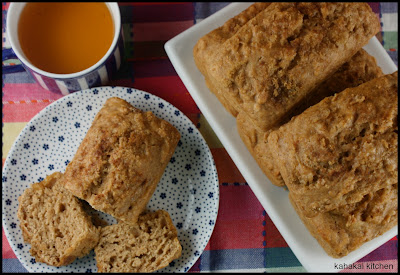 Notes/Results: This is just a simple and yummy little bread. The cinnamon is the prominent flavor--hard for it not to be with two tablespoons in there. It makes for a delicious smelling house while the breads are baking and cooling. The applesauce and milk (I used almond milk), make these little breads super moist and tender and not too heavy. I got six baby loaves out of the recipe--good for portion control, sharing, and small breads always bake up better for me anyway. I sprinkled the tops with a mix of brown sugar and cinnamon for a nice crispy sweet crust. Great on its own with an apple cider tea,this bread was also fantastic for breakfast with a smear of natural peanut butter. I would make this recipe again.

Note: A review copy of "Human Remains" was provided by the publisher and TLC Book Tours in return for a fair and honest review. I was not compensated for this review and as always my thoughts and opinions are my own.