The September Eating Well Magazine had an article on Kindersoups--soups that would appeal to kids. I think of myself as a big kid sometimes and was drawn to the Chicken Enchilada Soup which looked so creamy and inviting. Since I don't eat meat or chicken, I replaced it with canned jackfruit, as it works really well in soups and stews. My changes to the recipe are noted in red below. 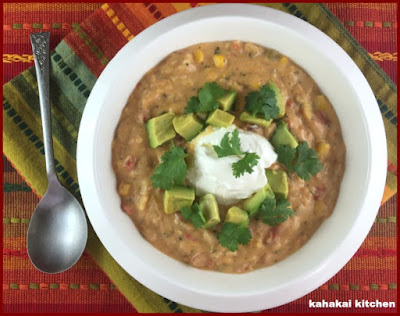 Eating Well says, "Corn tortillas thicken this chicken enchilada soup, but Cheddar and cream cheese give it the richness you'd expect from an enchilada. Serve it with something fresh and crunchy like a jicama slaw dressed with a little olive oil and lime juice for a healthy dinner that will appeal to the whole family." 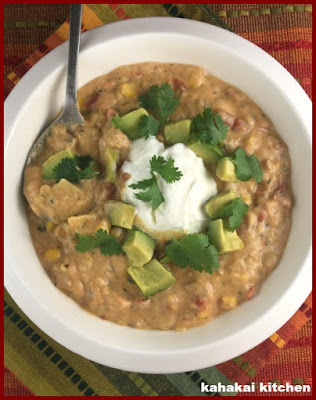 Add chicken (jackfruit) and cream cheese, stirring until the cream cheese is melted. Remove from heat. Combine shredded cheese and cornstarch in a small bowl and gradually add to the soup, stirring until melted. (I also added two more chopped corn tortillas as mine had completely melted.) Return the pot to medium heat and cook until hot, 1 to 2 minutes. Serve the soup with cilantro, sour cream and/or guacamole, if desired.