Some people are not fans of the cucumber, but I have always loved them--especially when they are crisp and cold from the fridge on a humid summer day. They lend themselves well to cold soups too and paired with cooling yogurt, dill, and lemon, it's perfect for summer. Add some grilled shrimp and it becomes a meal. 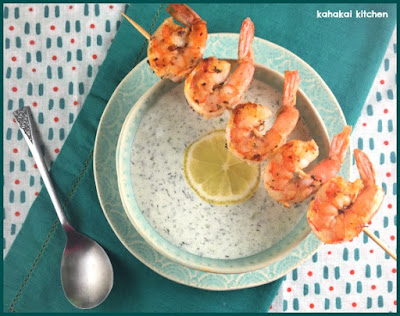 This recipe is from Ina Garten via Food Network and I picked it because it looked tempting and I had extra cucumbers and good shrimp in the freezer. I adapted it a bit, including drastically reducing the salt--whether you use use Ina's 2 Tbsp of kosher salt or the sea salt equivalent of 1 Tbsp--that's a whole lot of unneeded sodium--especially when you have the lemon juice, Greek yogurt, and dill for flavor. Speaking of the lemon juice, I reduced that and the black pepper too and marinated and grilled my shrimp. I forgot to buy half-and-half so I subbed in coconut milk and used the sweet Maui onion I had on hand rather than red onion called for. 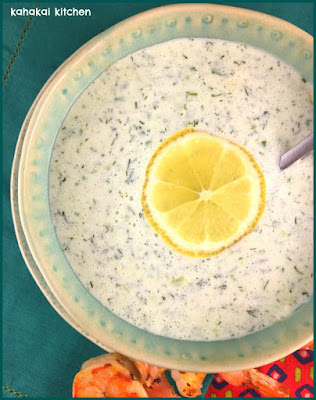 In a large mixing bowl, stir together the yogurt, half-and-half, cucumbers, red onion, scallions, salt, and pepper. Transfer the mixture in batches to the bowl of a food processor fitted with the steel blade. Process until the cucumbers are coarsely pureed and then pour into another bowl. Continue processing the soup until all of it is pureed. Fold in the dill, cover with plastic wrap, and refrigerate for at least 2 hours, until very cold.

Just before serving, stir in the lemon juice. Serve chilled, garnished with the shrimp, lemon, and fresh dill. 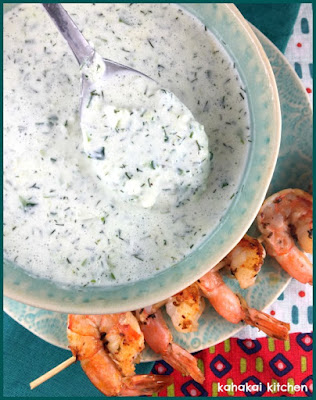 Notes/Results: I really like this soup--it is extremely cooling and satisfying without being heavy. I didn't miss the extra salt, black pepper, and lemon and felt that the soup would have had way too much of those flavors rather than being nicely balanced with the cucumbers and dill, present and not overpowered. Marinating and grilling the shrimp adds a lot to the flavor and I think the skewers are fun. If you aren't a shrimp person--a chicken kabob for carnivores or a skewer of roasted tomatoes would be a great alternative, as would coconut milk and non-dairy Greek yogurt if you wanted to keep it dairy free. It says to chill at least 2 hours and I would say that even longer is better--so it gets really cold and the flavor meld. This soup made for a great Sunday lunch, I would happily make it again. 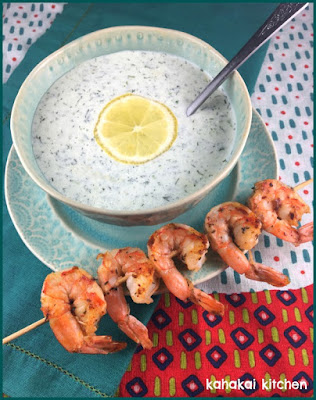 Linking up with I Heart Cooking Clubs for this week's Potluck theme. 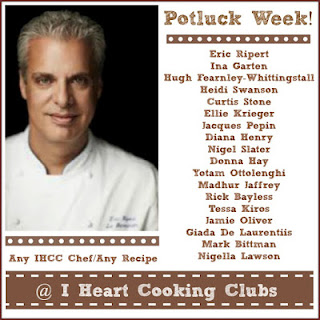 Lets take a look into the Souper Sundays kitchen.

My lovely friend Tina of Squirrel Head Manor joins in again this week with her Hybrid Corn, Tomato Seafood Chowder. She says, "When Doug grills we will on occasion have some leftover fish.  I save it, freeze it, until I have enough for chowder. Since I have posted about fish chowder before I wasn't going to link up again with the same-old-same-old. But! Since our corn and tomato soup needed a bump, we decided to combine the two soups. It worked out very well. I still had a bit of baguette left so we just packed that with the two versions of soup for our lunch."

Mahalo, Tina--for joining in this week!