The Book Tour Stops Here: A Review of "The Last Thing I Told You" by Emily Arsenault, Served with a Recipe for Zucchini Spaghetti with Pesto & Thyme Mushrooms

It's Wednesday and Hump Day and I'm happy to be today's stop on the TLC Book Tour for The Last Thing I Told You, a new mystery novel by Emily Arsenault. Accompanying my review is my take on a spaghetti dinner, Zucchini Spaghetti with Pesto & Thyme Mushrooms. 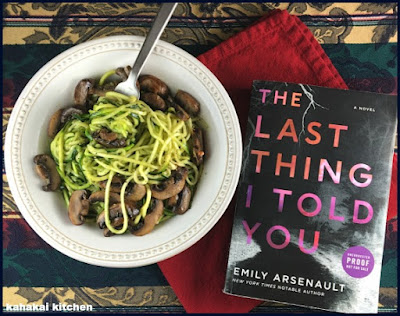 From the acclaimed author of The Evening Spider and The Broken Teaglass comes this psychological thriller about the murder of a psychologist in a quiet New England town and his former patient whose unreliable thread will keep readers guessing until the shocking end.

Why did I ever come back here? Surely because of you. Because I thought of something I’d always meant to tell you. Because you were the only one I ever really wanted to tell it to…

Therapist Dr. Mark Fabian is dead—bludgeoned in his office.

But that doesn’t stop former patient Nadine Raines from talking to him—in her head. Why did she come back to her hometown after so many years away? Everyone here thinks she’s crazy. And she has to admit—they might have good reason to think so. She committed a shockingly violent act when she was sixteen, and has never really been able to explain that dark impulse—even to Fabian. Now that Fabian’s dead, why is she still trying?

Meanwhile, as Detective Henry Peacher investigates Fabian’s death, he discovers that shortly before he died, Fabian pulled the files of two former patients. One was of Nadine Raines, one of Henry’s former high school classmates. Henry still remembers the disturbing attack on a teacher that marked Nadine as a deeply troubled teen.

More shockingly, the other file was of Johnny Streeter, who is now serving a life sentence for a mass shooting five years ago. The shooting devastated the town and everyone—including Henry, who is uncomfortable with the “hero” status the tragedy afforded him—is ready to move on. But the appearance of his file brings up new questions. Maybe there is a decades-old connection between Nadine and Streeter. And maybe that somehow explains what Nadine is doing in Fabian’s office nearly twenty years after being his patient. Or how Fabian ended up dead two days after her return. Or why Nadine has fled town once again.

But as Nadine and Henry head toward a confrontation, both will discover that the secrets of people’s hearts are rarely simple, and—even in the hidden depths of a psychologist’s files—rarely as they appear. 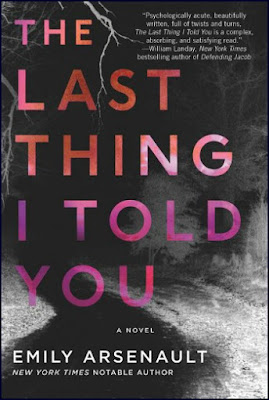 This is my third book by Emily Arsenault, having read In Search of the Rose Notes and reading and reviewing The Evening Spider for a book tour a couple of years ago. I need to read more of her work as she is an author who creates a good and often creepy vibe with her words. The Last Thing I Told You doesn't have the spooky vibe of the others I've read, but it shares similarities with a dual point-of-view and alternating time frames. Arsenault has crafted a twisty tale in answering the question of who killed Dr. Mark Fabian and how the crime may be related to the past of the two main characters--Henry Peacher, a police detective known for his heroic actions from a shooting at a retirement center five years ago, and Nadine Raines, Henry's former high school classmate who was a patient of Dr. Fabian after a violent incident with a teacher twenty years ago. Henry is trying to piece together who murdered the therapist, partially through two patient files the doctor pulled before his death--with Nadine's name on one of them. Nadine is back in town visiting her mother and stepfather and she's having conversations with the dead doctor in her mind. With her unresolved and troubled past, she is an unreliable narrator with her inner monologue and her suspicious actions after the murder. Both Nadine and Henry are interesting and well-drawn characters, each plagued by their pasts and I enjoyed the way the book unfolded insights into their personalities.

The Last Thing I Told You is not a quick read, or a pulse-pounder of a story--it is a slower moving and character-driven psychological drama rather than a true thriller, but it fascinated me as it unwound and had me guessing and second-guessing who the murderer might be. The tension and pace increase as the story moves along and there were a few good twists--some I saw coming and some I didn't. Overall, an interesting and compelling read that mystery and psychological drama and thriller fans who don't mind a deeper look at characters and a slower build, should enjoy.

Author Notes: Emily Arsenault is also the author of The Broken Teaglass, In Search of the Rose Notes, Miss Me When I’m Gone, and What Strange Creatures. She lives in Shelburne Falls, Massachusetts, with her husband and daughter. 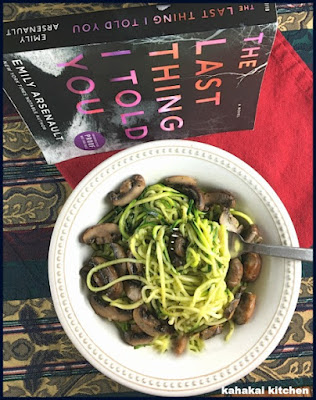 So it's been a stressful couple of weeks for a lot of reasons and although all of the baked goods mentioned sounded good, I didn't want to go down that path for my book-inspired dish--fearing I might not stop once a cookie or cupcake hit my taste buds. I am off of wheat and gluten for a while too, so although pizza seemed to be the meal of choice for several of the characters, I didn't want a traditional pizza. I saw a couple of recipes for no crust/cheese crust pizzas online (like this one) and thought that might be fun and it didn't require turning the oven on in this humid weather. I planned to top the mozzarella crust with with thyme mushrooms and pesto. Unfortunately, two tries did not result in a crisp cheese crust but instead a watery, gluey mess. It could have been my mood, it could have been my mozzarella (I did use fresh mozzarella as the recipe author said he did in the comments), or the pan, but regardless of the whys, it just was not the recipe for this day/week. I aborted my pizza plan, picked out my thyme mushrooms and admittedly, ate some of the less watery mozzarella bites, and decided on the spaghetti dinner mentioned the book--only made with zucchini noodles, pesto and the thyme mushrooms. A healthier choice anyway--although someday I will try that crustless pizza again. ;-) 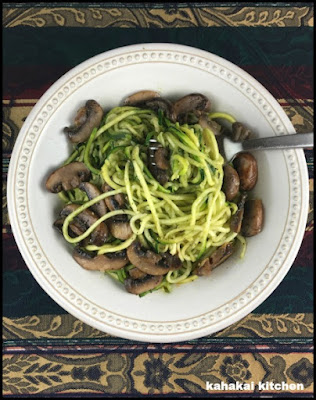 Use a spiralizer, julienne peeler or regular vegetable peeler to slice or shave zucchini into noodles. Heat a large saucepan over medium heat, add oil and zucchini noodles, tossing to distribute the oil. Cook until noodles are slightly softened, about 2 minutes.

Remove from the heat, stir in the pesto--tossing until the zucchini noodles are well-coated. Fold in the thyme mushrooms and serve.

Heat olive oil in a skillet over medium heat. Add the garlic and mushrooms and sauté until the mushrooms have browned--about 5 to 6 minutes. Stir in thyme and cook for another minute or so. Season to taste with salt and pepper. 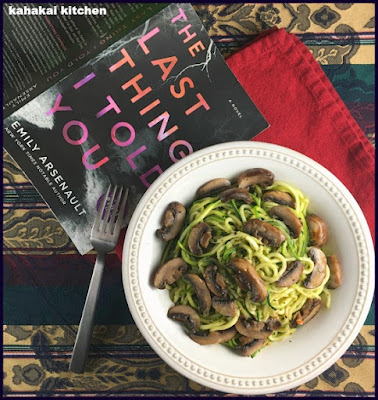 Notes/Results: Very simple but very tasty with lots of flavor from the pesto and the thyme mushrooms. Although it was my second choice as a dish, it made a quick, easy and satisfying dinner for a grumpy person on a humid night. If you don't have a spiralizer, you can use a peeler for wider thin noodles, or stack and slice them for a more spaghetti-like experience. The mushrooms are tasty on their own as a side dish too. I used a lighter hand with the pesto--about 2 tablespoons as I didn't want it to overpower the mushrooms and it all worked well together. I would happily make it again. 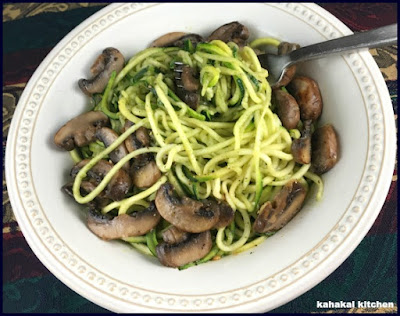 Note: A review copy of "The Last Thing I Told You" was provided to me by the author and the publisher, Harper Collins, via TLC Book Tours. I was not compensated for this review and as always, my thoughts and opinions are my own.