The Book Tour Stops Here: A Review of "The Garden of Blue Roses" by Michael Barsa, Served with Vanilla Chia Pudding with Blueberries & Peaches

It's the day before the July 4th and your thoughts are probably turning to cookouts and fireworks, and maybe an icy cold beverage if it's hot and humid where you are. There is something else that can feel cool and refreshing on a warm day and that's a chill from a creepy, Gothic tale like The Garden of Blue Roses by Michael Barsa. I'm reviewing it today as a stop on the TLC Book Tour and accompanying my review is a cool and creamy vanilla chia pudding, topped with blueberries and peaches and inspired by my reading. 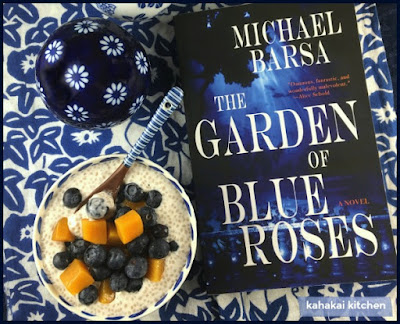 
A car lies at the bottom of an icy ravine. Slumped over the steering wheel, dead, is the most critically acclaimed horror writer of his time. Was it an accident? His son Milo doesn’t care. For the first time in his life, he’s free. No more nightmarish readings, spooky animal rites, or moonlit visions of his father in the woods with a notebook and vampire make-up.

Or so he thinks.

Milo settles into a quiet routine–constructing model Greek warships and at last building a relationship with his sister Klara, who’s home after a failed marriage and brief career as an English teacher. Then Klara hires a gardener to breathe new life into their overgrown estate. There’s something odd about him–something eerily reminiscent of their father’s most violent villain. Or is Milo imagining things? He’s not sure. That all changes the day the gardener discovers something startling in the woods. Suddenly Milo is fighting for his life, forced to confront the power of fictional identity as he uncovers the shocking truth about his own dysfunctional family–and the supposed accident that claimed his parents’ lives. 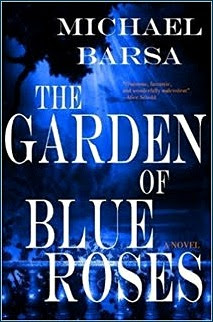 I'll say it flat out ...this is a strange book and a book that took me a bit to get into and make complete sense of. It's also a book that not everyone is going to like--because of that strangeness, its unreliable and fairly unlikable main character, and the fact that really, there are no truly likable characters here, just some less unlikable than others. All that being said, I liked it, I really did, and I found myself in turn fascinated with, repelled by, and oddly protective of Milo and Klara Crane--the two main characters. (For movie fans, I picture Milo in my mind as a cross between a young Anthony Perkins in Psycho and Bud Court in Harold  and Maude and young Milo as the kid who played Damien in The Omen and Klara as Jennifer Jason Leigh in Delores Claiborne.) The Garden of Blue Roses definitely has a strong Shirley Jackson Gothic, creepy sibling vibe that is reminiscent and yet very different from We Have Always Lived at the Castle--which happens to be a favorite of mine.

I don't want to give away any more details than are already in the blurb, but lets just say that this is family dysfunction at its creepiest. The horror here is not in-your-face, it's psychological, so more dark and chilling than truly scary--a tone that starts from the first page with the shrill blast of an old clanging phone ringing in a large, spooky house and an accident on an icy road, then builds the tension, page by page until the very end with the plot, and the Crane family's secrets are cleverly unfolded with dark humor and some great twists. There were a few times when things went over my head and I had to go back and read passages again to figure out what was happening, but it was worth it. This is Barsa's first book and if you like smart Gothic and literary fiction that leans into horror, suspense, strange but well-drawn characters, and dark family secrets, you might just enjoy it As for me, I'm going to add it with its gorgeous dark blue cover to my shelves and wait for Barsa to write some more. 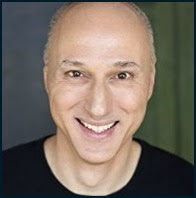 Author Notes: Michael Barsa grew up in a German-speaking household in New Jersey and spoke no English until he went to school. So began an epic struggle to master the American “R” and a lifelong fascination with language. He’s lived on three continents and spent many summers in southern Germany and southern Vermont. 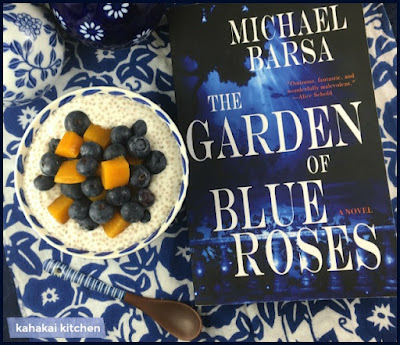 For my book inspired dish, I decided to make a pudding. There's a reference in the book where something (you really don't want me to go into it) is compared to a child with pudding on his face. I wanted to add blueberries for the gorgeous blue color of the cover and canned peaches (or rather a cup of peaches in their juices) because Milo had a favorite brand. I decided on chia pudding because it's healthier than standard puddings--you get protein, fiber, calcium, omega 3's and other good nutrients--and chia seeds are low in carbs. Vanilla and a little maple syrup to sweeten and flavor and coconut milk to keep it dairy-free. Plus my friend Natalie just post a pic of a chia seed pudding on Instagram and I've been craving it. 2 cups coconut milk, or milk of choice
1 tsp vanilla extract
1 1/2 Tbsp maple syrup, or to taste
1/2 cup chia seeds
fresh blueberries and whatever other fruit or nuts you like to top

Place coconut milk. vanilla and maple syrup into a bowl and whisk until well blended. Whisk in the chia seeds until evenly blended. Pour into a jar or container and chill in the fridge overnight. If you have time, whisk the mixture--or shake it gently a few times to make sure it gels evenly.

When ready to enjoy, scoop into bowls and serve topped with fresh fruit and whatever else you like. 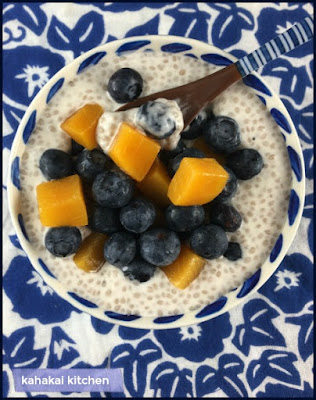 Notes/Results: As much as I dislike tapioca and those mushy spheres, I adore chia seed pudding. There's something about how creamy it becomes, but then the crunch of the seeds (which I like--think of poppy seed dressing or muffins) make it a little different and interesting--much like this book. This vanilla chia seed pudding was an excellent blend of vanilla flavor, sweet, but not too sweet and perfect with the blueberries and peaches. I ate it for lunch and will be having some for dessert and for breakfast--I think it counts as an all-day food. I'll happily make it again. 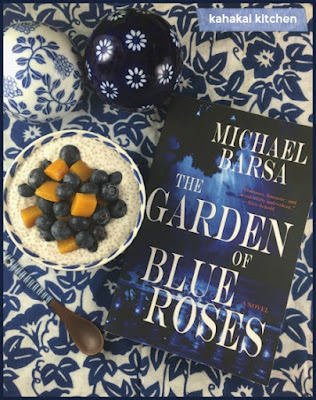 And once again, how gorgeous is this cover?!? 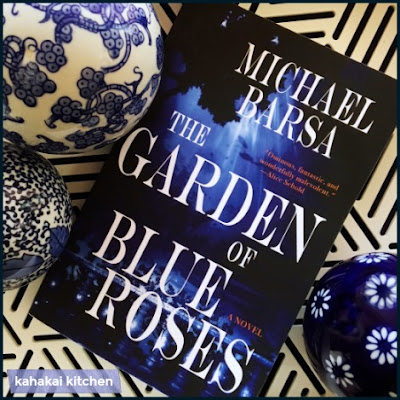 Note: A review copy of "The Garden of Blue Roses" was provided to me by the author and the publisher via TLC Book Tours. I was not compensated for this review and as always, my thoughts and opinions are my own.