Review & Recipe: "Everything We Left Behind" by Kerry Lonsdale, Paired with Ahi Poke Tacos and Miso-Ginger Cabbage Slaw

Even with the holiday on Monday, it takes some effort to get over hump day and a step closer to the weekend. A good book and a tasty dinner certainly help. Today I have an over-due review for Everything We Left Behind by Kerry Lonsdale and I'm accompanying it with some quick and delicious Ahi Poke Tacos with Miso-Ginger Cabbage Slaw. 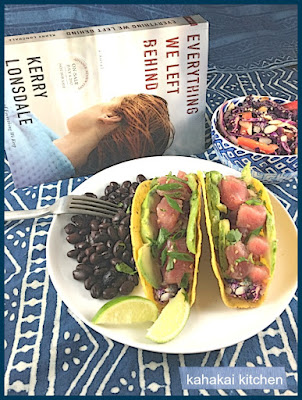 Two months before his wedding, financial executive James Donato chased his trade-laundering brother Phil to Mexico, only to be lost at sea and presumed dead. Six and a half years later, he emerges from a dissociative fugue state to find he’s been living in Oaxaca as artist Carlos Dominguez, widower and father of two sons, with his sister-in-law Natalya Hayes, a retired professional surfer, helping to keep his life afloat. But his fiancée, Aimee Tierney, the love of his life, has moved on.

She’s married and has a child of her own.
Devastated, James and his sons return to California. But Phil is scheduled for release from prison, and he’s determined to find James, who witnessed something in Mexico that could land Phil back in confinement. Under mounting family pressure, James flees with his sons to Kauai, seeking refuge with Natalya. As James begins to unravel the mystery of his fractured identity, danger is never far behind, and Natalya may be the only person he can trust. 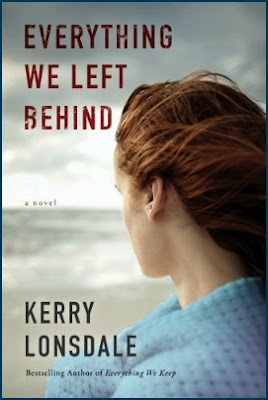 I reviewed Kerry Lonsdale's first novel, Everything We Keep, last August for TLC Book Tours (here's my review and book-inspired fritters recipe) and I really enjoyed the story and the mystery around what happened to James. I then read her second book, All the Breaking Waves, on my own and loved it. When I heard she was writing a follow-up to the first novel, I was excited to learn more about James's story, so when her publisher contacted me and asked if I would like to read and review Everything We Left Behind, I immediately said yes. I feel more than a bit bad that it has taken me so long to write and post my review. I did a quick reread of the first book, devoured this one and knew what dish I wanted to make, but July and August flew by before I knew it. Luckily I took plenty of notes. ;-)

My first recommendation is to read Everything We Keep, before starting this one. It is possible to read Everything We Left Behind without it, but you won't have the complete background and the story flows better when you have been introduced to Amiee, James's fiancée, and the other characters and get their perspective on what's happened. I won't go into a lot of the details (the small spoilers if you have not read the first book are in the cover blurbs) but this book is about James coming out of his fugue state not remembering the previous six years he spent as Carlos living in Mexico, or his two sons and current love interest. This book is set in Mexico, California and Hawaii and goes back and forth both in time and in perspective between James and Carlos as the story unfolds. It's a bit mystery, romance, and family drama mixed together and Lonsdale keeps the story interesting and made me feel strongly for James's plight and for those who love him. The human mind is so fascinating and although there are novels out there that deal with memory loss, this one has a more unique take on it. Does it get a bit soapish at times? A bit, but it makes for a great beach and end of summer read, it certainly kept me turning the pages, and it has me looking forward to the third book coming out next year. 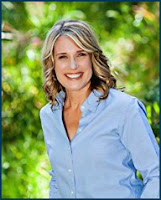 Author Notes: Kerry Lonsdale believes life is more exciting with twists and turns, which may be why she enjoys dropping her characters into unexpected scenarios and foreign settings. She graduated from California Polytechnic State University, San Luis Obispo, and is a founder of the Women’s Fiction Writers Association. She resides in Northern California with her husband, two children, and an aging golden retriever who’s convinced she’s still a puppy. 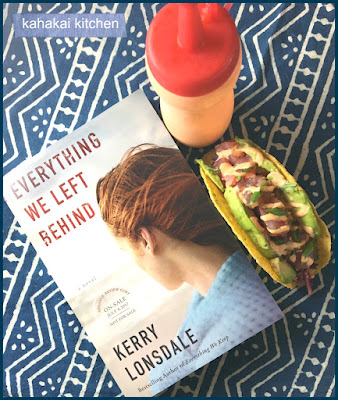 I knew that I wanted to go with a fish taco since it was mentioned as something that James made in Mexico and Hawaii. Although poke wasn't mentioned, I thought that it is something that Kauai-dwelling Natalya would introduce him to and I decided to make Ahi Poke Tacos. If you aren't familiar and haven't seen my various poke posts, poke is a Hawaiian salad of cubes of raw fish--often ahi and various seasonings and other ingredients. Going with the more Asian feel of these tacos, I made a Miso-Ginger Cabbage Slaw to put in the tacos and eat alongside them. 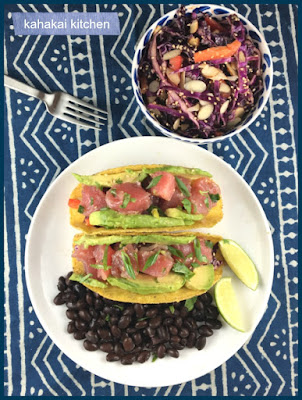 These Ahi Poke Tacos are really more of a suggestion than a recipe. If you don't do raw fish, send your poke to me and you can use a non-raw poke variation like cooked shrimp or tofu, or use your favorite cooked fish--it won't be a poke taco but it will still be good. If you are lucky enough to live in a city with grocery stores that have poke at their fish counters, it is easiest to buy your favorite kind. If not and you want to make it, here are a couple of recipes (Hawaiian Poke with Black Sesame Seed, California Roll Poke) to get you started--there are plenty recipes online too as poke has become quite popular in the last couple of years. 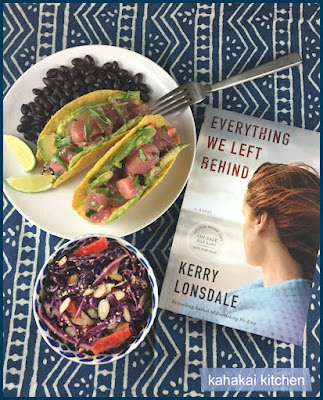 For the tacos, I used flat-bottomed crispy taco shells--because with the poke is in chunks, plus the other goodies stuffed inside, they hold up better than regular crispy taco shells. I placed the Miso-Ginger Cabbage Slaw in the bottom of the taco shell, layered in the poke, sliced avocado and topped it with some of my favorite Sriracha-Garlic Mayo, sliced green onion and chopped cilantro. Easy peasy! In addition to the cabbage slaw in the taco, I served it and some simple black beans with the taco.

Place the cabbage, pepper and almonds into a large bowl and toss together.

Stir together ingredients in a small bowl. Taste and add additional Sriracha or seasoning as desired.

Cover and chill until ready to use. Will keep for about a week to ten days in fridge. 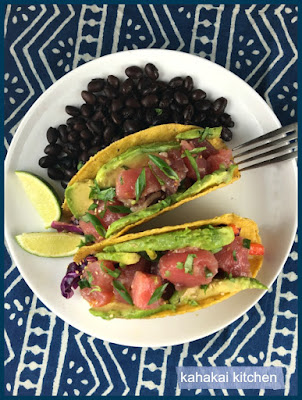 Notes/Results: If you love sushi and raw fish, you will love poke and if you love poke, there is no reason you won't love these tacos. They are so fresh-tasting and delicious, along with being a good mix of texture--the tender fish, the creamy avocado, and the crisp cabbage slaw make them a pleasure to eat. I completely forgot to put the sauce on them until after I took most of the pictures, but it adds a nice little kick to the mix, so I definitely recommend it, or you can use your favorite salsa or hot sauce. Much as I like just eating poke on its own, or with rice and veggies in a poke bowl, poke tacos may be my new favorite way to enjoy it. I have made them a handful of times now and I am sure I will continue to enjoy them--in fact I really want one right now. ;-) 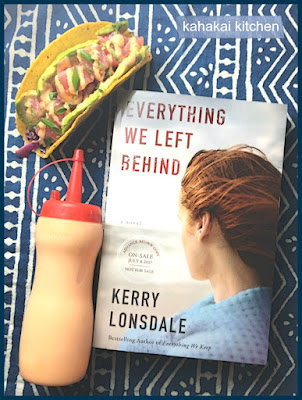 Note: A review copy of "Everything We Left Behind" was provided to me by the author and the publisher. I was not compensated for this review and as always, my thoughts and opinions are my own.