The Book Tour Stops Here: A Review of "A Mother Like Mine" by Kate Hewitt, Served with a Recipe for Hot New Potato & Parsley Salad

It's Friday and this was a crazy week, so I am thankful it is finally here. To kick off the weekend, I'm happy to be on the TLC Book Tour for a good end-of-summer read, A Mother Like Mine by Kate Hewitt. Accompanying my review is a recipe for a simple Hot Parsley Potato Salad (simple but coated in delectable butter from Hugh Fearnley-Whittingstall) that I paired with some local fish and that was inspired by my reading. 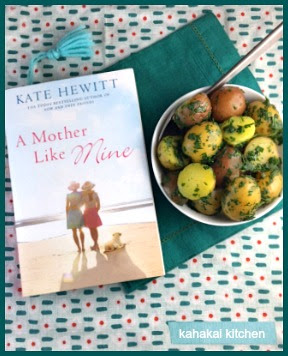 Welcome to England’s beautiful Lake District, where a reluctant reunion forges a new bond between a daughter and her wayward mother….

Abby Rhodes is just starting to get her life on track. After her fiancé’s unexpected death, she returned with her young son to the small village where she grew up and threw herself into helping her ailing grandmother run the town’s beach café. Then one evening, her mother, Laura, shows up in Hartley-by-the-Sea and announces her plan to stay. After twenty years away, she now wants to focus on the future—and has no intention, it seems, of revisiting the painful past.

Laura Rhodes has made a lot of mistakes, and many of them concern her daughter. But as Abby gets little glimpses into her mother’s life, she begins to realize there are depths to Laura she never knew. Slowly, Abby and Laura start making tentative steps toward each other, only to have life become even more complicated when an unexpected tragedy arises. Together, the two women will discover truths both sad and surprising that draw them closer to a new understanding of what it means to truly forgive someone you love. 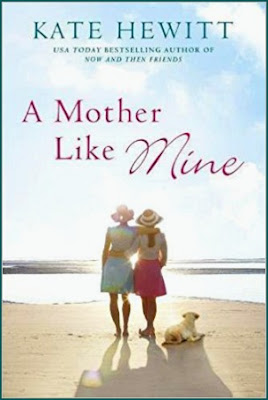 At first I found myself a bit angry at the book--or really rather at myself for not realizing that this book was a part of a series (the author's Hartley-by-the-Sea three-book series) when I signed up for the book tour. It's my own fault for not looking closer and responding to "Lake District" and "cafe" when signing up. I admit to having some issues about reading books out of order, and although most/many would probably tell you that although characters repeat through the books and you don't really need to read them in order, it still bugs me. I didn't have time to go back and get/read the previous two books, so I had a bit of disgruntlement when I started A Mother Like Mine. Once I re-reminded myself it wasn't the book's fault and started reading, I basically got over it. ;-)

I am a big sucker for second-chance books where characters, particularly female, move back home or somewhere quaint and start their lives over and so A Mother Like Mine was right up my alley with an estranged mother and daughter combination doing just that. Both daughter (Abby) and mother (Laura) have their issues and it took me some time to understand their characters and appreciate them. As the two began to build their relationship, I began to build mine with them and really began rooting for them to succeed--with themselves, with each other, and with their business. The book alternates between their two perspectives, so there's a chance to know how each character is feeling and both are well-drawn. The supporting characters are interesting and overall engaging--although there are a lot of them to get know well (where the other books come into play I am sure).

There is definitely a lot of family and small-town drama that abound in this book and Hartly-by-the-Sea, so if you like books with strong (or growing stronger) female characters, second-starts, family and especially mother-daughter relationships, and settings of small U.K. coastal villages, you will likely enjoy this one. I did--enough so to put the other two books onto my TBR list. A Mother Like Mine walks the balance well of being not-too-heavy, but containing some darker, heaver moments--making it a great book to pour a cup of tea, settle into a comfortable spot, and escape with for a bit. 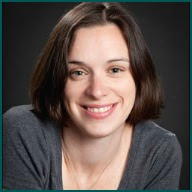 Author Notes: Kate Hewitt is the USA Today bestselling author of more than fifty books, including the Hartley-by-the-Sea novels Rainy Day Sisters and Now and Then Friends, and more recently, the Willoughby Close series. A former New Yorker, she now lives in Wales with her husband five children. She also writes as Katharine Swartz. 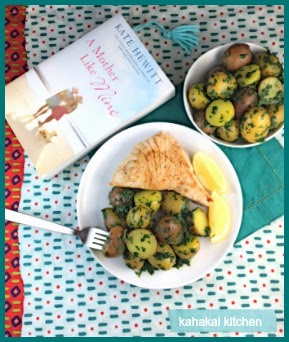 For my book-inspired dish, potatoes--especially mashed and jacket potatoes, were mentioned most often besides the scones and ice cream. Since I didn't really feel like baking or making ice cream this week, I decided to go with a potato dish. I was originally going to make a potato mash with thyme and caramelized onions but I've been busy and it's been so humid, that something quicker and less fussy was more tempting. Since I needed to make a potato dish this week for another blogging event, I went to River Cottage Every Day and found a Hot New Potato and Sorrel Salad recipe there. Plus, one of the goals for the Beach Cafe in the book was to upgrade the food and serve some light and simple dinners, so I decided that a warm potato salad and a piece of fish would be a quick and easy addition to the menu. 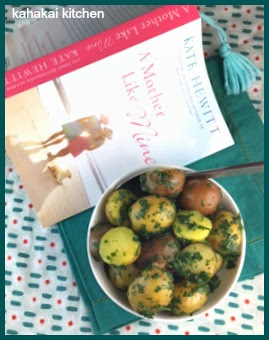 Of course the nearby grocery store that sells bags of Maui-grown sorrel has it whenever I am not looking for it and doesn't have it in when I specifically want or need it. The book offered a variation on the recipe with parsley that also sounded really good and so that's what I ended up with. Although not quite what I was going for, it turned out to not be at all a disappointment. 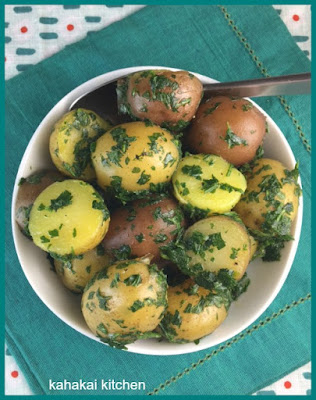 Hugh says, "Garnishing just-boiled new potatoes with a little chopped parsley and some butter is always nice, but here I’m talking about loads of parsley – and quite a lot of butter too."

Scrub or scrape the new potatoes. Put them in a pan, cover with cold water and salt well. Bring to the boil and cook until just tender. Small, freshly dug new potatoes cook much faster than you think, so be vigilant and taste a small one after just 5 minutes or so.

While the potatoes are cooking, strip off coarse stalks of parsley and wash well  and chop the leaves fairly fine (but not to dust).

As soon as the potatoes are ready, drain and put them into a bowl with the butter and oil. Throw the chopped parsley into the bowl and toss well. Leave for a minute, so the heat of the potatoes wilts the parsley, then toss again. Rest for another minute, then season with salt and pepper and serve at once.

Hugh notes that if you do happen to slightly overcook the spuds, don’t despair, just stir them vigorously with the parsley and butter so they break up a little and get a bit ‘mashy’. Pretend it was quite deliberate – your ‘bashed’ new potatoes will still be delicious. 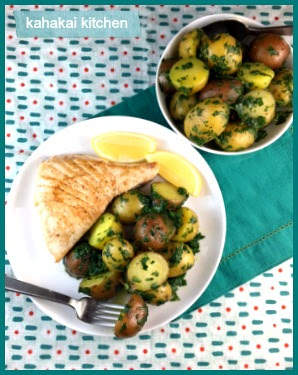 Notes/Results: Although I did really want to try the sorrel version of this hot salad recipe, I have no complaints over the flavor of these parsley potatoes. If you love potatoes, butter, and parsley, you can't help but love these little potatoes. They are simple but decadent and make a great warm salad/side dish--in this case paired with lightly seasoned local fish. I used kajiki (marlin) and seasoned it with a little celery salt, pepper and a touch of Old Bay Seasoning and lightly pan-fried it in a little coconut oil. For the potatoes, use good butter and season them liberally with salt and pepper and they are quite yummy and potentially addicting (judging by the number I ate out of the pan before they made it onto the serving bowl and onto the plate). I was tempted to slightly overcook them and make a more smashed potato, but since I bought the creamy little baby Yukon & red mix, I wanted to keep to the warm salad texture of the recipe. I will happily make these again and will try the sorrel version when I find it again. 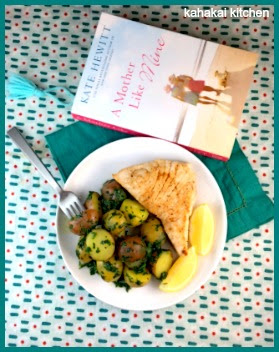 I'm linking up with I Heart Cooking Clubs where this week's theme is our September Monthly Ingredient/Dish Challenge: Potatoes. We can make potato recipes from our current or any previous IHCC Featured Chef. 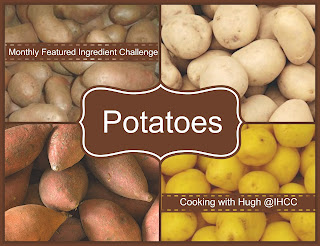 And I'm linking this post up to the Weekend Cooking event at Beth Fish Reads, a weekly event that is open to anyone who has any kind of food-related post to share. For more information, see the welcome post.

And it's called a salad in the book (maybe due to all the green from the parsley) ;-) so, I am linking it up to Souper Sundays, here at Kahakai Kitchen--where every Sunday, we feature soups, salads, and sandwiches from across the blogosphere. You can find the details for joining in here-on this week's post.

Note: A review copy of "A Mother like Mine" was provided to me by the author and the publisher via TLC Book Tours. I was not compensated for this review and as always, my thoughts and opinions are my own.