The Book Tour Stops Here: A Review of "Everything We Keep" by Kerry Lonsdale, Served with A Recipe for Zucchini & Summer Vegetable Fritters with Herbed Dipping Sauce

It's Monday again and I'm not sure how it got here so fast. A sure cure for any Monday blues is a good book paired with a tasty recipe. On today's TLC Book Tour, I'm reviewing the novel, Everything We Keep by Kerry Lonsdale and sharing a recipe for Zucchini and Summer Vegetable Fritters with a delicious creamy, herb dipping sauce inspired by the book. 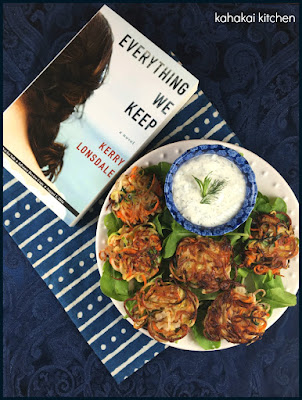 Sous chef Aimee Tierney has the perfect recipe for the perfect life: marry her childhood sweetheart, raise a family, and buy out her parents’ restaurant. But when her fiancé, James Donato, vanishes in a boating accident, her well-baked future is swept out to sea. Instead of walking down the aisle on their wedding day, Aimee is at James’s funeral—a funeral that leaves her more unsettled than at peace.

As Aimee struggles to reconstruct her life, she delves deeper into James’s disappearance. What she uncovers is an ocean of secrets that make her question everything about the life they built together. And just below the surface is a truth that may set Aimee free…or shatter her forever.

A luminous debut with unexpected twists, Everything We Keep explores the devastation of loss, the euphoria of finding love again, and the pulse-racing repercussions of discovering the truth about the ones we hold dear and the lengths they will go to protect us. 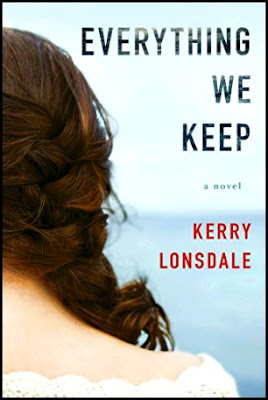 Everything We Keep is an easy book to get swept up into. My heart immediately went to Aimee--who on the day she was set to marry her childhood sweetheart James, is instead  at the church for his funeral. After the funeral she is approached by a woman who says she has information about him and that he is alive. At first Aimee dismisses the information but a few months later, grief-stricken, struggling to move on with her life and having feelings that things might not be as they seem, she starts looking into Jame's disappearance and purported death in a boating accident in Mexico. It's at that point that the story moves from a woman overcoming loss and finding herself into a mystery-suspense novel. The secrets and twists were dark and absorbing and I found myself constantly guessing (with only partial success) what was going to happen next and where the story was going. There are some things that are not explained that well in the story and a few instances where I had to suspend at least a bit of logic and just go with the ride, but the twists and turns make that ride interesting and fun right up to the very end--which came with a bang and left me thinking about it for days after I finished the book.

The fact that this is Kerry Lonsdale's debut novel is impressive. Her character development, pacing, and story building are excellent. I liked that this book mixed romance and drama with suspense in such a organic way. I think it will appeal to anyone who likes a well-told story that unsettles and keeps you wondering. A great pick for a beachy read or curling up on a rainy afternoon--just don't read it when you need to sleep or have responsibilities to attend to--you won't want to put it down! 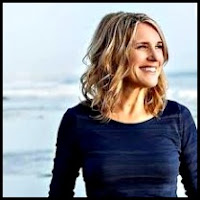 Author Notes: Kerry Lonsdale believes life is more exciting with twists and turns, which may be why she enjoys dropping her characters into unexpected scenarios and foreign settings. She graduated from California Polytechnic State University, San Luis Obispo, and is a founder of the Women’s Fiction Writers Association, an online community of authors located across the globe. She resides in Northern California with her husband, two children, and an aging golden retriever who’s convinced she’s still a puppy. Everything We Keep is Kerry’s first novel.

With Aimee being a chef and opening her own coffee shop/cafe, there was definitely some good food inspiration throughout the book--even if it wasn't the focus. Breads were Aimee's specialty and she baked them for her parent's upscale pub, The Old Irish Goat, where rosemary roasted potatoes and whiskey-glazed corned beef and lamb stew and red potatoes were on the menu. There was mention of apple pie, salad, lemonade, margaritas, lemongrass and coconut candles, casseroles, cakes and cookies, coffee cake with cinnamon and maple syrup--and sour cream to make it light and tender, a carafe of sangria and a round of passion fruit champagne shots and hard cider, stews, tarts and breads taste-tested for Aimee's Cafe menu, lemon blueberry cake with cream cheese frosting, and Thai chicken panini with mixed greens. Aimee had a passion for mixing exotic beans and coffee syrups like her Pangi Hazelnut Latte--named after the region in India where the hazelnut was produced and adapted by Ian, or the specialty lattes and mocha's she served. In Mexico there were fish tacos and a Mexican salad, burgers and fries, grilled seafood and mangoes. 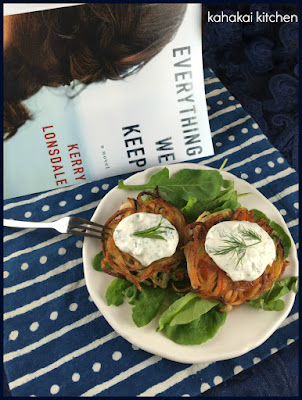 I narrowed it down to two menu items from Aimee's Cafe--a Mediterranean omelet--'overflowing with goat cheese, brine-cured olives, and fresh fennel and dill' and her chef Mandy's zucchini fritters that Amiee's mom said were delicious. The fritters weren't given much detail but it's summer, there's plenty of zucchini about and I do love me a good fritter. I was just going to make a plain zucchini fritter but saw a Curtis Stone recipe for Summer Vegetable Fritters that added potato, carrot and onion to the zucchini and had a tasty-sounding dill sauce to accompany them. I liked that the fritters were light with nothing but veggies with a little egg to hold them together, salt, and pepper.

I kept the fritter recipe the same but switched the dipping sauce recipe a bit--using cashew creme for a non-dairy version and adding tarragon to the dill because I love it and had it on hand. 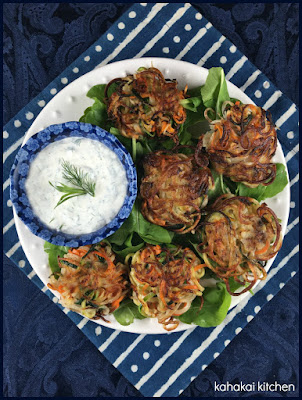 Toss the potato, carrot, zucchini, onion, and 2 teaspoons of salt in a medium bowl.Let the vegetable mixture stand for 10 minutes, or until the salt has drawn out some of the moisture from the vegetables. Place the vegetables in a colander to drain the excess moisture then squeeze the vegetables between your hands to exude as much moisture as possible.

Using a fork, beat the eggs and 1/4 teaspoon black pepper in a large bowl to blend well. Add the vegetables and stir to coat with the egg.

Heat 1 1/2 tablespoons of oil in a large heavy sauté pan over medium-high heat. Working in batches and using about 1/4 cup of the vegetable-egg mixture for each, spoon the vegetable-egg mixture into the pan forming thin patties that are about 3-inches in diameter. Fry for 4 minutes on each side, or until the fritters are golden and crisp on the outside. Using a metal spatula, transfer the fritters to paper towels to absorb any excess oil.

Meanwhile, stir the sour cream and dill in a small bowl to blend. Season to taste with salt and pepper.

Place the fritters on a platter and serve with the sour cream-dill sauce. 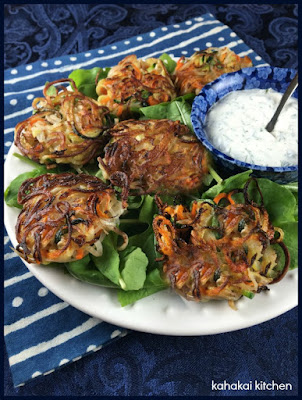 Notes/Results: These are really simple but really delicious veggie fritters where the vegetable flavor comes through and pairs really well will the dipping sauce. I like that they are mostly vegetables with just egg to hold them together and salt and pepper for flavoring. They actually held together pretty well, especially once I followed directions and made them small, like the recipe says. ;-) The dip was really good--I liked the addition of the tarragon to the dill and using the cashew creme with a bit of lemon worked perfectly in place of the sour cream. You could also use yogurt or mayo as a substitute too. With a spiralizer and if you use your salting time wisely, you can have these tasty little fritters on the table in 30 minutes, even with the 10-minute rest time. Just get your veggies salted early and while you wait, make the dressing, beat the eggs and pre-heat the pan and oil so you are ready to go once you have squeezed all the extra water out. I spiralized all of my veggies, even the onions in just a few minutes, then used scissors to cut them into smaller lengths. You could vary the veggies--although I think the zucchini, carrot, potato and onion were a good combination. Crispy on the outside, tender insides, I would definitely make these fritters again. 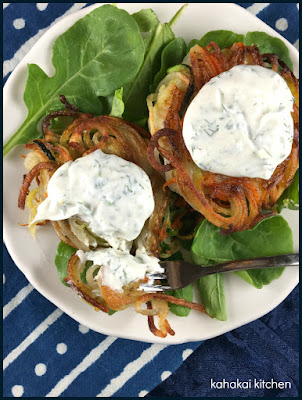 Serving Note: I think these make a great appetizer but they are slightly fragile, so I suggest serving them plated with a bit of the dipping sauce on top or having small plates available to eat them on. Served on some baby arugula, a few of them make a nice summer starter to a meal. 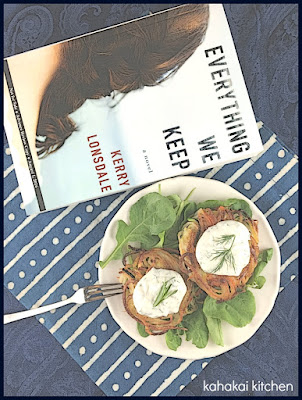 Because I made them in just under 30 minutes, I am linking these fritters up at I Heart Cooking Clubs where this week's theme is Express Meals: 30 Minutes or Less! You can see what quick Curtis Stone dishes everyone made by checking out the picture links on the post. 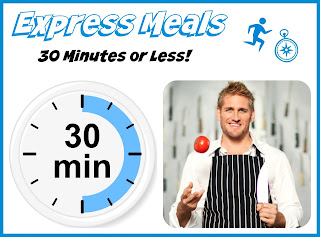 Note: A review copy of "Everything We Keep" was provided to me by the publisher and TLC Book Tours in return for a fair and honest review. I was not compensated for this review and as always my thoughts and opinions are my own.