The Book Tour Stops Here: A Review of "The Good Daughter" by Karin Slaughter, Served with a Different Kind of P B & J: A Pecan-Miso Butter & Jelly Sandwich

It's Friday and there is a lot going on in the world. My thoughts and prayers go out to everyone in Florida and anywhere in the path of Hurricane Irma, those still recovering from Hurricane Harvey, and those in the Mexico earthquake. I'm taking a break from watching the news and worrying to bring you a book tour review and recipe. I'm a huge fan of Karin Slaughter and her dark and twisty thrillers, so I'm excited to be a stop on the TLC Book Tour for The Good Daughter--her latest standalone book. For comfort, I've paired it with a PB&J sandwich with a twist--the "P" is for pecan-miso butter--which sounds unusual and tastes delicious. 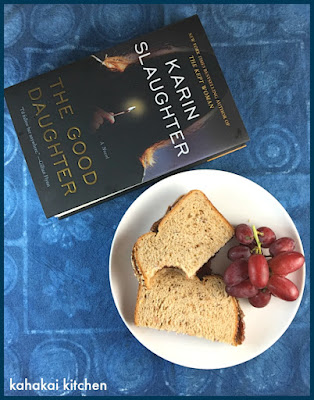 The stunning new novel from the international #1 bestselling author — a searing, spellbinding blend of cold-case thriller and psychological suspense.

Two girls are forced into the woods at gunpoint. One runs for her life. One is left behind…

Twenty-eight years ago, Charlotte and Samantha Quinn’s happy small-town family life was torn apart by a terrifying attack on their family home. It left their mother dead. It left their father — Pikeville’s notorious defense attorney — devastated. And it left the family fractured beyond repair, consumed by secrets from that terrible night.

Twenty-eight years later, and Charlie has followed in her father’s footsteps to become a lawyer herself — the ideal good daughter. But when violence comes to Pikeville again — and a shocking tragedy leaves the whole town traumatized — Charlie is plunged into a nightmare. Not only is she the first witness on the scene, but it’s a case that unleashes the terrible memories she’s spent so long trying to suppress. Because the shocking truth about the crime that destroyed her family nearly thirty years ago won’t stay buried forever…

Packed with twists and turns, brimming with emotion and heart, The Good Daughter is fiction at its most thrilling. 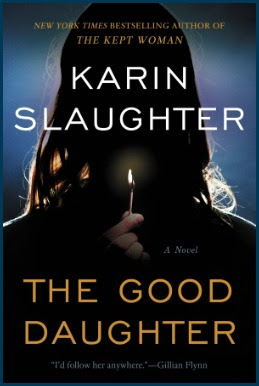 If you don't "do" dark and twisty, this book and Karin Slaughter's writing are definitely not for you--so you can probably skip the review and go down and check out the sandwich recipe. If you do enjoy a mystery/thriller that gets very dark and makes your pulse-pound, this book is definitely it. As I have said before, Karin Slaughter is the master of books like this. (And while she writes the darkest-of-the dark for her characters, she also posts "Caturdays" and other cute cat and dogs pics on Facebook--I like that juxtaposition of her personality.) ;-) I started with her standalone novel Pretty Girls and accidentally started into the middle of her Will Grant series with The Kept Woman, so I'm going back and slowly reading through her series in order (as I must do it)--starting with the Grant County one. So yes, The Good Daughter is pretty dark (trigger warnings for some graphic violence among other things--I don't want to get too specific here so as not to cause spoilers, so if you have specific triggers you can contact me--on the sidebar--and ask) but it's also a well-written, deftly-paced, page-turner of a thriller that made the 500+ pages speed by and made it very hard to put down.

The story takes place in Pikeville, Georgia--a small town a couple of hours outside of Atlanta. The prologue hits the ground running with a horrific crime that takes place 28-years-ago and where two sisters--Charlotte (Charlie) and Samantha (Sam) Quinn--lose their mother and their life as they know it as fallout from their father's career as a criminal defense attorney. Then the story jumps to the present, where almost three decades later Charlie, now a defense attorney like her father, witnesses another shocking and disturbing crime and Sam, estranged from her family and living in New York, finds herself back in Pikeville and working on the case. Although most of the book is set in present day, the book dips back into the original crime and its aftermath and effect on the two sisters.

Charlie and Sam are great characters--they are complex--having built huge defenses from the tragedy they suffered--and Slaughter wrote the loving but very contentious sister relationship realistically and created a interesting cast of characters to support them. The crimes are terrible and compelling at the same time and Slaughter throws in plenty of twists and turns. I had parts of the mystery figured out but she managed to sneak some big surprises in, especially at the end--which I love. There is a prequel story to The Good Daughter called Last Breath on Kindle (for .99 cents) that you don't need to read before the book, but it is good and introduces you to Charlie, so I recommend it.  The Good Daughter is an excellent mystery/thriller with elements of a police/legal thriller that also reads as a family drama. It isn't for the fainthearted and will likely keep you up at night while reading it and after--but if you like thrills and chills, put it on the top of your TBR stack. 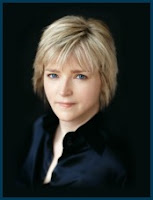 Author Notes: Karin Slaughter is one of the world’s most popular and acclaimed storytellers. Published in 36 languages, with more than 35 million copies sold across the globe, her sixteen novels include the Grant County and Will Trent books, as well as the Edgar-nominated Cop Town and the instant New York Times bestselling novel Pretty Girls. A native of Georgia, Karin currently lives in Atlanta. Her Will Trent series, Grant County series, and standalone novel Cop Town are all in development for film and television.

I struggle with finding food inspiration within Karin Slaughter's dark and twisty novels. I'm usually at least a bit disturbed and more interested in chewing on my nails than thinking about food. Still, there were some food mentions in the book such as a box of spaghetti, air with "a tinge of fried chicken," scallops, a field of sorghum, cabbage and watermelons, several mentions of sandwiches--mostly peanut butter and jelly--and cokes, Bourbon, IPA, artisanal cheeses, cereal, beer, milk, ice cream, Thanksgiving, a breakfast of tea, yogurt and granola, wine, fruits, berries and legumes, food trucks serving fish tacos, Korean barbecue, Peri Peri Chicken, and "something called Fusion Obtrusion," a Biergarten, orange crackers, champagne, and a Kind Bar. 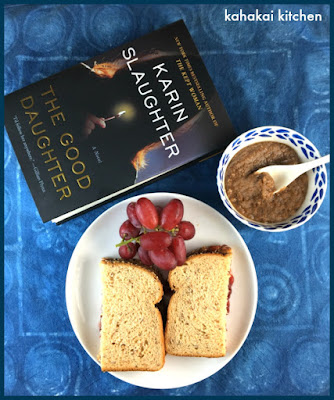 Since some of the food mentions had more negative connotations in the story, I opted to go with the peanut butter and jelly sandwiches, which seemed to be both substance and comfort for Charlie, made by her father's secretary Lenora. It was happenstance that a daily email from Bon Appetit featured an interesting take on a PB&J, one made with pecan-miso butter. I occasionally buy fresh pecan butter from the natural foods co-op I belong to and the though of making my own with the addition of miso was intriguing. I like the salt and umami miso adds and thought the pairing with the sweet jelly would be tasty. The recipe call for homemade grape jelly and I opted out of making it because truth be told, I was both short on time and I vastly prefer strawberry jam to grape jelly. When I don't have any of my chia seed jam on hand, I like Bon Maman brand strawberry preserves. 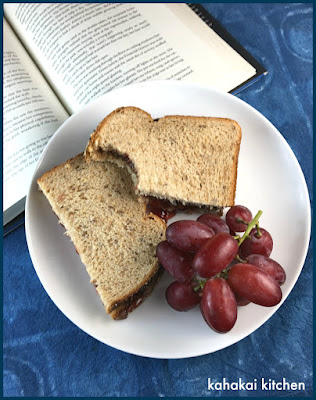 Preheat oven to 300°. Toast pecans on a large rimmed baking sheet, tossing once halfway through, until fragrant and slightly darker, 18–25 minutes. Let cool. Transfer to a food processor and pulse, scraping down as needed, until the texture of peanut butter. Add miso and pulse just to combine. 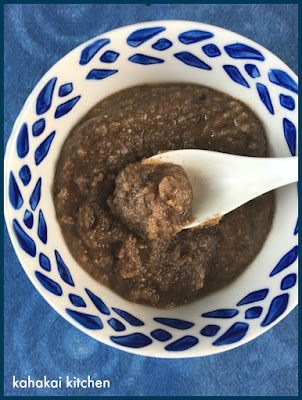 If Making Jelly: Bring grapes, cinnamon, salt, and 1 cup water to a boil in a medium saucepan. Reduce heat to medium-low and simmer, stirring occasionally, until grapes have burst and liquid is jammy, 25–35 minutes. Let cool, discard cinnamon stick, then mash with a potato masher.

Do Ahead: Pecan butter and grape jam can be made 1 week ahead. Cover and chill. 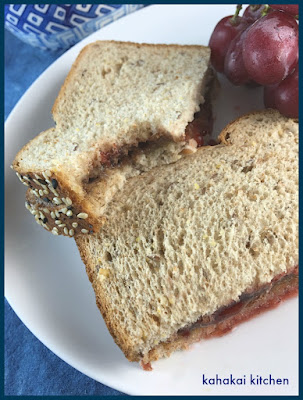 Notes/Results:  First off, why I haven't been making my own pecan butter before now is beyond me. I think it is one of those nuts that lend itself to nut butter with the toasty sweet flavor and the abundance of oil that make it work so well to easily turn it into a spread. The miso adds a unique flavor to the nut butter--more than a pinch of salt would--but you wouldn't necessarily be able to identify it without knowing it is in there. It just makes the nut butter really tasty, especially with the sweetness of the strawberry jam. (Although I kept sticking a spoon into the nut butter and enjoying it on its own too.) ;-) You could use any flavor of jam in this--I like the intensity of sweetness of the strawberries. I will be making more sandwiches from the pecan-miso butter and making more of it as well since I think it would be great to dip raw carrots, celery and other veggies in it. 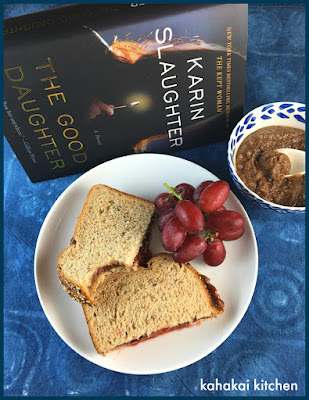 And since these are like open-faced sandwiches, I am linking them up to Souper Sundays, here at Kahakai Kitchen--where every Sunday, we feature soups, salads, and sandwiches from across the blogosphere. You can find the details for joining in on this week's post.

Note: A review copy of "The Good Daughter" was provided to me by the author and the publisher, Harper Collins via TLC Book Tours. I was not compensated for this review and as always, my thoughts and opinions are my own.