How much do I love fennel?! Must be a lot, judging by the number of times I have it on the menu. Bulb, fronds, seeds... it's all delicious and an excellent source of vitamin C, a very good source of fiber, folate, and potassium. Think of it as an phytonutrient and antioxidant powerhouse and a great anti-inflammatory food. 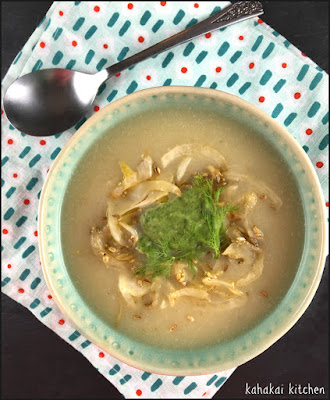 Since locally-grown fennel was on sale this week, several bulbs came home in my shopping bag and I knew some of it was destined for the soup pot. This Fennel, Garlic and Potato Soup from Martha Rose Shulman is described as "reminiscent of the classic potato and leek soup known as vichyssoise,but it’s lighter and contains no dairy. It’s good hot or cold"--perfect for when you aren't sure what the weather wants to do or when days are feeling a bit humid. I made mine vegan and topped it with the leftover fronds, made into pesto (recipe here) and some thinly shaved bulb--lightly sautéed with fennel seeds in olive oil. 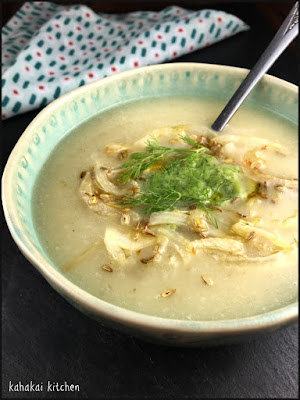 Heat the olive oil in a large, heavy soup pot or Dutch oven over medium heat and add the onion, celery, chopped fennel and a generous pinch of salt. Cook gently for about 5 to 8 minutes, until the vegetables have softened and lost some of their volume. Add the potatoes, garlic, bouquet garni and the water or stock and bring to a boil. Reduce the heat, add salt to taste, cover and simmer 45 minutes.

Remove the bouquet garni. Blend the soup until smooth with an immersion blender, or ladle into a blender, working in 1 1/2-cup batches. Remove the center from the blender cover, place a towel over the cover and pull it down tightly to prevent splashing. Blend and return to the pot. Heat through, add salt and pepper to taste and serve, or chill and serve cold, with your choice of garnishes.

This will be good for 2 to 3 days. Whisk the soup before reheating or serving cold.

Serve pesto at once, store in the fridge for up to a week or freeze up to one month. 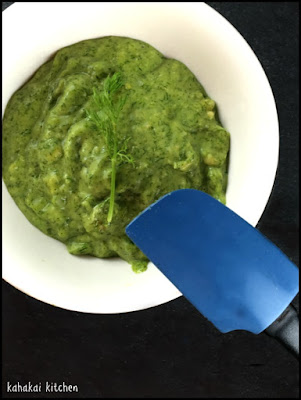 Notes/Results: So much great flavor in this fennel soup and rich and creamy without any dairy, which I love. The potatoes, garlic and herb balance out the fennel well, although--especially with the toppings, this is a definitely fennel-forward soup, which makes me very happy. If you aren't familiar with fennel, I hate describing it because it's hard--you do have to mention the licorice/anise flavor which was a bit of a turnoff for me until I tried it and realized it wasn't like popping a piece of black licorice in my mouth. ;-) It's just really cooling, good, and has a certain herbal taste that I love and that like many veggies, slightly changes depending on whether you eat it raw, sauté it, roast it, bake it, or grill it. I find the green part of the stalk and the seeds to have the most anise flavor, with the white bulb and fronds having a mellower flavor--so if unsure, start with those parts. And do save those fennel fronds and make the pesto! I adore it and with the lemon, it brightens up the soup nicely and would be amazing on pasta or bread as well. This soup is good both warm and cold, not too heavy but satisfying, and it smells incredible while cooking. I will definitely make it again! 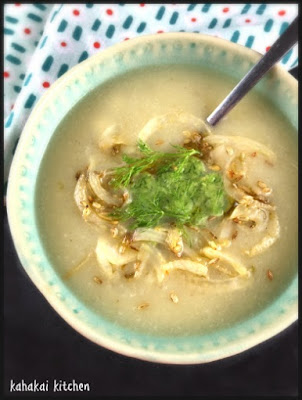 Some good friends came bearing soup at last week's Souper (Soup, Salad, & Sammie) Sundays linkup, here's a recap of what was posted--everything looked so good, I had to feature them all! ;-)

Like me, Tina of Squirrel Head Manor enjoys soup even when the weather turns humid, especially when it's a bowl of Bacon, Corn and Potato Chowder. She says, "Now that the whining about the heat is out of the way let me present a wonderfully rich bowl of soup. Yes, it would be better welcomed in the cool Fall months. Call me crazy but I love soup year round. No matter the temperature, I like a bowl of soup for lunch. Look, I also made a fresh baguette to go with it." Check out her post and her tip for mess-free corn 'shaving' too!

Joyce of Kitchen Flavours made Nigella's aromatic Vietnamese Pork Noodle Soup and says, "Quick and easy to cook, and tastes great! For the noodles, instead of ramen noodles, I've used fresh yellow noodles, which just need a quick blanch in hot boiling water. I did not use baby bok choy, but have replaced with Chinese Choy Sum, the last batch of  choy sum harvest, from my container garden. They are tender and delicious! ... I've made this for lunch, but it would be great as a one-dish meal for dinner, or even breakfast. We, Asians, love having noodles for breakfast!" 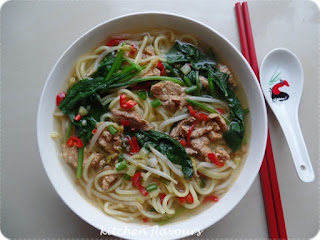 Joyce of Joy 'N' Escapade tried Madhur Jaffrey's stewy Red Lentil Dhal and says, "I cooked a pot of red lentil dhal (dal), my toddler's favorite stew and mine too. Both of us can easily drink bowls of dhal as our ultimate comfort food. :)  I really love digging into this bowl of chunky dhal stew." 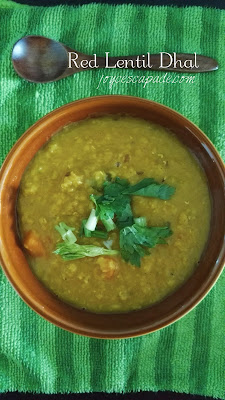 Sue of Couscous & Consciousness tried a raw version of Curtis Stone's Quick Curry Noodle Soup using veggie noodles! (A woman after my own heart!) She says, "Obviously, because this is a raw version, it's not a hot soup, but there's actually plenty of heat comes through from the chilli, so it was still plenty comforting even on an autumn evening.  The wild card I guess in my version was the beetroot - not something that you would generally expect to find with these bold Asian flavours, but the sweet yet earthy flavour of the beets actually worked surprisingly well, and there's no doubt that they certainly add some visual impact to the dish.  I would have no hesitation including them again."

Claudia of Honey From Rock made a fabulous Mulligatawny Soup inspired by a fun mystery series that I want to read. She says, "The original version of this soup consisted of a broth from lentils, fried onions and curry powder. Today it normally designates a thickened soup that is strongly spiced with curry powder and nutmeg. Often, strips of vegetables, nuts and rice are added."  Anglo-Indian food then, and appropriate for English royalty. ... Simply delectable, and not really difficult.  Well worth it.  Don't you just love the sound of it, Mulligatawny, Mulligatawny, tra la la la, sing along with me.  And the taste more than lives up to expectations." 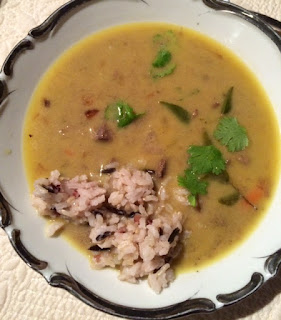 And, Vicki of I'd Rather Be At The Beach brings Slow Cooker Chicken Taco Soup and says, "This was really good, lots of taco flavor and the ratio of the ingredients was perfect. I was going to eat a hard crusty bread with it but we had some left over cornbread from the night before and Anthony said he was going to eat that instead. So I did too, not sure I’d like it with the soup. I shouldn’t have worried, they were really good together."

So, yes, if you hadn't noticed, Souper Sundays is back with a new format of a picture link each week where anyone interested can post their soups, salads or sandwiches and then a recap of (some, OK usually all of...) the entries on the following week  (If you are not familiar with Souper Sundays, you can read about of the origins of it here.)

Thanks to everyone who linked up last week!

If you would like to join in Souper (Soup, Salad, and Sammie) Sundays I would love to have you! Here's how...

To join in this week's linkup with your soup, salad or sandwich:
On your entry post (on your blog):