The Book Tour Stops Here: A Review of "He Will Be My Ruin" by K.A. Tucker, Served with a Recipe for Dark Chocolate-Topped No-Bake Shortbread Bars

Today's TLC Book Tour stop includes a review of the mystery-thriller He Will Be My Ruin by K.A. Tucker. Accompanying my review is a recipe for Dark Chocolate-Topped No-Bake Shortbread Bars, inspired by my reading. 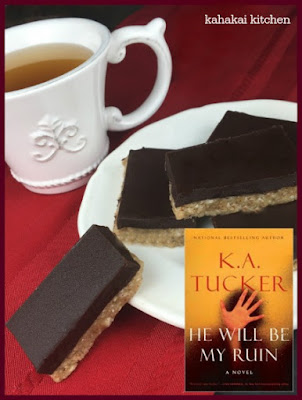 On the surface, Celine Gonzalez had everything a twenty-eight-year-old woman could want: a one-bedroom apartment on Manhattan’s Lower East Side, a job that (mostly) paid the bills, and an acceptance letter to the prestigious Hollingsworth Institute of Art, where she would finally live out her dream of becoming an antiques appraiser for a major auction house. All she had worked so hard to achieve was finally within her reach. So why would she kill herself?

A man who was supposed to be her salvation . . .

Maggie Sparkes arrives in New York City to pack up what’s left of her best friend’s belongings after a suicide that has left everyone stunned. The police have deemed the evidence conclusive: Celine got into bed, downed a lethal cocktail of pills and vodka, and never woke up. But when Maggie discovers a scandalous photograph in a lock box hidden in Celine’s apartment, she begins asking questions. Questions about the man Celine fell in love with. The man she never told anyone about, not even Maggie. The man Celine believed would change her life.

Until he became her ruin.

On the hunt for evidence that will force the police to reopen the case, Maggie uncovers more than she bargained for about Celine’s private life—and inadvertently puts herself on the radar of a killer. A killer who will stop at nothing to keep his crimes undiscovered. 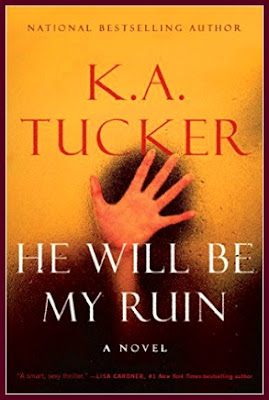 Coming off of a couple of books that were good but slower moving and required more thought and attention in reading, I was happy to open up an exciting thriller that pulled me right into the action and the story. He Will Be My Ruin is a compelling and dark psychological thriller that kept me guessing throughout the book. The prologue starts off with a bang with Maggie, the main character, bound and apparently in the trunk of a car at potentially at the mercy of the person that killed her best friend. The rest of the book leads up to how she got in that predicament, with plenty of dark and twisty turns along the journey. Maggie has come to New York to pack up the apartment of her best friend Celine, who committed suicide--something that Maggie is having a hard time reconciling with the Celine she knew and grew up with. Although once she begins going through Celine's personal items and journals, Maggie realizes that there is much she didn't know about her friend and her life the past few years. Instead of suicide or even an accidental death, Maggie becomes convinced that Celine was murdered and sets out to determine who did it and why.

This is the first book I have read from K.A. Tucker and I wasn't disappointed. She has crafted an absorbing mystery that had just enough plot twists to keep me guessing. I like mystery-thrillers that I don't have completely figured out by the end and although I thought I had this one nailed (and frankly was a bit smug about it), I found that I only had part of the solution correct. Wanting to find out exactly what happened made me not want to put this one down, making the 350-ish pages fly by. There is some romance in the book, but the focus is on the mystery and the friendship and relationship between Maggie and Celine. I liked Maggie, even her stubbornness and sometimes not-so-great decisions, and I adored the elderly neighbor Ruby who was a friend to Celine and became a friend and helper to Maggie. I also enjoyed Doug, the PI Maggie hires and his tech expert (hacker) Zac--and Maggie's somewhat snarky relationship with both of them. He Will Be My Ruin will appeal if you like a good mystery-thriller that has its dark moments and ratchets up the action with each turn of the page.
----- 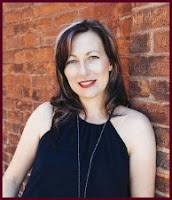 Author Notes: K.A. Tucker is the author of the Ten Tiny Breaths and the Burying Water series. She currently resides outside of Toronto with her husband, two beautiful girls, and an exhausting brood of four-legged creatures.

There is not a ton of food presence in the novel, but there are mentions of food and drink like bottles of Ketel One, Maker's Mark, and Jägermeister on a polished brass bar cart, a mention of Rosa's breakfast enchiladas, coffee, tea and shortbread, a New York foot-long hotdog with hot peppers and mayo, popcorn, cold pizza, ramen noodles, canned tuna, toast and eggs at a diner, wine, chestnuts roasted over the fire, eggnog cheesecake, Cristal and duck confit, parsnips, roasted squash and steak, and a tall caramel latte from Starbucks.

There were two things that called out to be made, the first a "Cold-Blooded Ginger"--a cocktail that Maggie orders at her family's charity ball and appears to be made from Southern Comfort and ginger ale with a cherry garnish. The second was the buttery shortbread that Celine's elderly neighbor Ruby is known for. "I grab one and take a bite. And moan just like Grady, as the buttery cookie melts in my mouth, hints of curry and parmesan sparking my taste buds." I went with Ruby's shortbread for my inspiration. 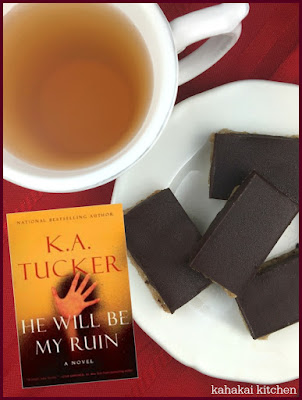 As delectable as shortbread and especially curry and parmesan-spiked shortbread sounded, I am not much of a baker and I really didn't think I needed the all of the butter and sugar in a normal shortbread recipe, so instead, I googled "healthy, no-bake shortbread" and believe it or not, I got quite a few different examples.

This No-Bake Chocolate Shortbread from Food 52 caught my eye and so I made a few adjustments to the recipe--based on what I had on hand. Depending on the chocolate and sweetener that you use, they are easily adaptable to be vegan or paleo-friendly. Sure it's not authentic shortbread, but it is easy to make, is topped with dark chocolate, is a healthier indulgent treat, and it has a  surprisingly buttery taste and texture. I paired it with some of my favorite coconut Oolong tea.

Place ground almonds, coconut, nut butter, sweetener, and sea salt into the bowl of a food processor. Blend until it reaches a bound consistency (about 1 to 2 minutes), scraping down the sides of the bowl as needed.

Press mixture evenly into a greased pan (8"x 8" or similar size), lined with parchment for easier removal. Make the base about 1/2" to 3/4" thick. Place pan in freezer for about 30 minutes or until solid.

Melt chocolate and coconut oil together in the microwave or using a double-boiler. Once melted, add in the sweetener if using and stir until it's fully dissolved.

Pour melted chocolate evenly over the shortbread base, smoothing it out with a spatula to the edges. Place in freezer for about an hour, until set.

Remove from the freezer and let stand about 15 minutes before cutting into squares with a sharp knife.

Store in an airtight container in the fridge. 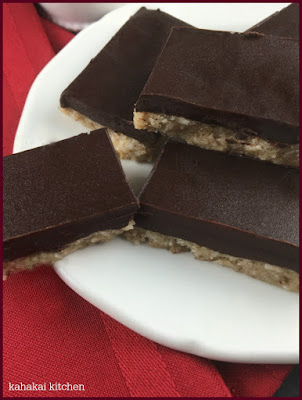 Notes/Results: These are surprisingly good. Maybe not surprisingly because they do have a layer of deep, rich dark chocolate and it's hard not to love that, but the bottom layer is buttery, delicious, and definitely has a shortbread vibe. They are super easy to make--I didn't pre-grind my almonds and macadamia nuts and I used large chip-like pieces of unsweetened coconut, so I think a finer texture could have been achieved by putting the nuts and coconut in my Vita-Mix dry blender container first and grinding them before putting into the food processor, however, I really didn't mind the grainier texture at all. I think these are really adaptable bars, based on whatever nuts and nut butters you have on hand to use. They are very rich so I cut mine into 12 pieces and found one makes for a satisfying treat. Much better for me than a piece of shortbread but still fills the craving for a "buttery" treat, I will definitely make them again. 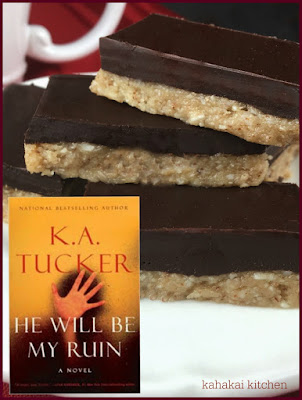 Note: A review copy of "He Will Be My Ruin" was provided to me by the publisher and TLC Book Tours in return for a fair and honest review. I was not compensated for this review and as always my thoughts and opinions are my own.