Imagine it's 1889 and you have a mysterious ailment that leaves you weak and unable to walk, stuck thousands of miles away from most of your family and friends, bedridden for years. That's Alice in Bed, a novel by Judith Hooper about Alice James, the younger sister of author Henry James and a spirited and intelligent young woman. On today's TLC Book Tour stop, I'm reviewing this unique and fascinating story and pairing it with a recipe for Easy French Hot Chocolate, inspired by my reading. 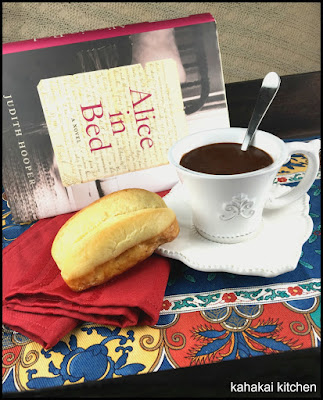 One of her brothers is the greatest English novelist of his time; another is inventing American psychology. The James family is famous in Boston and New York for its brilliance, eccentricity, and mesmerizing conversation. Alice James is no less remarkable than her brothers (Henry and William), but there is a problem: she is a girl. Her education has been haphazard, there are no colleges for women, and young ladies are expected to be Angels in the House. No one could be less suited to angelic domesticity than the tart-tongued, defiantly original Alice. She must chart her own course, but how?

Falling mysteriously ill while crossing the Atlantic at age 38, she becomes confined to her bed in a lodging house in provincial England. Thus begins her second life, when she recalls or redreams her life and struggles to make sense of it.  How did her collapse begin? Was it “Father’s Ideas”? The night she drank absinthe and fell in love with a girl? The time William went to the asylum? The childhood years in Paris, when Father fired each of her governesses in turn? Was it the horrors of the Civil War, the erotic relations with the Temple cousins, the day Henry deserted her and sailed to Europe? Was it simply the oddness of “growing up James”?

Alice in Bed is an absorbing, poignant, sometimes hilarious journey through the Gilded Age with one of literature’s most unusual and captivating heroines. 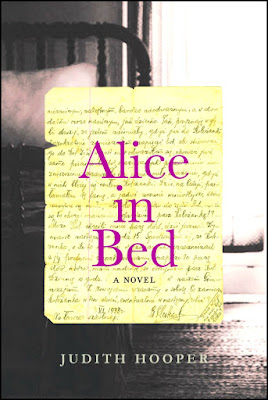 My Review: Alice in Bed is a beautifully written, somewhat meandering novel that puts the reader into the head of Alice James, through her diary entries, letters, and relationships with her family, friends and lovers. I confess that I knew virtually nothing about Alice James before reading this book, having some familiarity with her two famous brothers, author Henry James and psychologist and philosopher William James (and most of that sketchy knowledge of the James brothers came from various lit and psych classes many years ago). I was pulled to the book through the description and the thought of what life would be like for a woman in the late 1800s--already sidelined and compartmentalized due to gender--who is bedridden with a mysterious aliment (or ailments). Alice is quite a character right from the start, full of wit and intelligence and unfortunately also full of the family leanings toward depression, manic behavior, and various other physical and mental maladies. Alice chafes against the treatment of women and the role of dutiful daughter and caregiver she is placed in as much as the chafing of the corsets she is expected to wear. In addition to having little outlet beyond family dinners and conversations to use her mind, her lack of general health and vitality, and her attraction to females rather than men, all serve to make her life a challenge even before her illness and inability to walk begins. It's easy to admire her and to wonder what she could have done living in another time and place where she would have had more freedom, options, better health care, and a chance for more than a "female hysteria" diagnosis or the other strange conditions she was thought to have. Although we will never know exactly what led to Alice's illnesses, the author does provide an interesting afterword, "What was wrong with Alice James?" that discusses possible reasons for her health issues.

I did find Alice in Bed challenging to get through it at times. I think it was as much or more of a case of right book, not-quite-the-right time for me than it is any criticism of the writing. I have had a couple of extremely busy weeks where reading could only happen in small, late evening bursts and this book needs and deserves more attention than I was giving it--it is not a quick and easy read. I struggled through the first two-thirds before getting some dedicated 'quiet time' this weekend to finish it up and found that when I could sit and really absorb what I was reading, my enjoyment of the story was tenfold. Author Hopper makes the period, setting, and characters come alive in such a way, that I had to frequently remind myself it was a novel. Sad in places, but sharply funny in others, Alice in Bed is a great pick if you like strong female characters, history, and intimate character studies, Just be sure to give yourself plenty of time to savor the story. 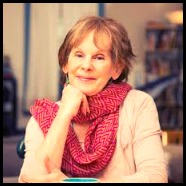 Author Notes: Judith Hooper was an editor at Omni magazine and is the author of Of Moths and Men and co-author of The Three-Pound Universe and Would the Buddha Wear a Walkman?: A Catalogue of Revolutionary Tools for Higher Consciousness. She lives in Amherst, Massachusetts.

Food Inspiration: There was probably more drinking going on than food in the book--from the startling emerald green hue of absinthe to whisky, after-dinner brandies, copious cups of tea, café au lait, cafés crèmes, and French hot chocolate. For the food, there were mentions of rolls, croissants, sandwiches, oysters and mussels, scones, peaches, grapes, a vegetable garden with runner beans, lettuce and butternut squash, Christmas goose,  and soft-boiled eggs. I chose to make a version of Alice's "French Breakfast" as my book-inspired dish.

Before her collapse, while on a trip to Europe with her brother and aunt, Alice enjoyed her Paris breakfasts of hot chocolate and a roll. Later, she found she could recreate "an aftertaste of Paris" back home, but soon lost her taste for it--finding that, "When it stopped "agreeing" with me, it meant that Europe had entirely faded away." I could relate--thinking of the times I have traveled somewhere and formed a habit that I tried to bring back with me, but then abandoned once back to "real life." 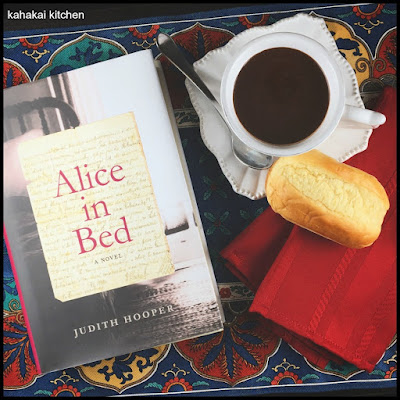 I am always a fan of good, rich drinking chocolate and had several recipes for French-style hot chocolate tagged to make. But when I was searching through, the one that called out to me was the Easy (3-Ingredient) French Hot Chocolate by the always amazing Clotilde of Chocolate & Zucchini. it combines good dark chocolate, non-dairy milk of your choice  and almond butter to make it even richer and thicker. It can be made vegan--depending on your chocolate, takes under 10 minutes to make, and sounded delicious. It might not be a traditional French chocolat chaud in preparation but then, Alice wasn't a traditional sort of girl, so I think that it works.

As Alice did, I wanted to pair the hot chocolate with a French roll of some sort and found these little brioche rolls that seemed to fit the bill nicely. Although the hot chocolate is vegan, you have probably guessed that the rolls are decidedly not--I think there is half a stick of butter in each one. But they are certainly tasty. ;-) 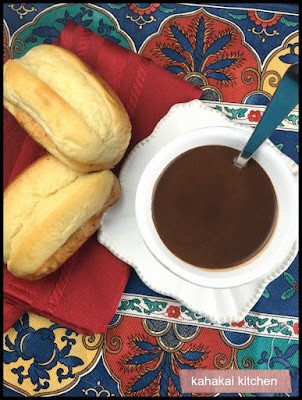 You can find the recipe here at Chocolate & Zucchini. The changes I made were to the types/brands of ingredients I used--Theo Pure 70% Dark Chocolate, unsweetened coconut milk, and because I felt like the almond butter I had on hand was too grainy, I used Justin's Chocolate Hazelnut Butter. 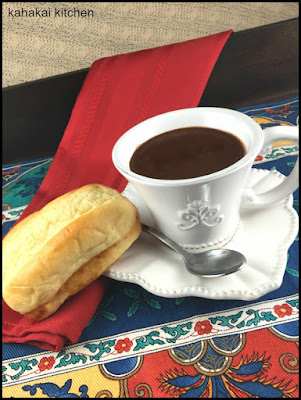 Notes/Results: I made a half batch--which made about a scant 1 1/2 cups total. But this stuff is so rich that it was plenty. It is ultra-rich, thick, creamy and decadent--everything you want a sipping chocolate to be. Very indulgent, and I happen to think the extra boost of the chocolate hazelnut butter was pretty amazing. The sweet and buttery brioche roll was perfect for dipping into the chocolate. It is a bit humid this week for drinking hot chocolate, so I drank about a half cup with my roll and then chilled the rest. Clotilde says, "They will make fabulous chocolate creams the next day, served cold and optionally sprinkled with crushed butter cookies or some granola." I'll let you know the verdict. ;-) (Update: It made a really lovely little pot de crème style pudding when chilled overnight. No picture of it chilled--sorry. :-( With the warmer humid weather we are having lately, I'd make it just to chill it for pudding--maybe with some coconut whipped cream on top.) I will definitely make this again, hot or cold. 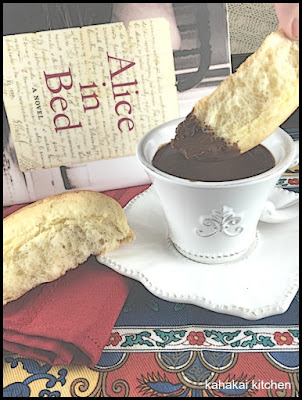 Note: A review copy of "Alice in Bed" was provided to me by the publisher and TLC Book Tours in return for a fair and honest review. I was not compensated for this review and as always my thoughts and opinions are my own.