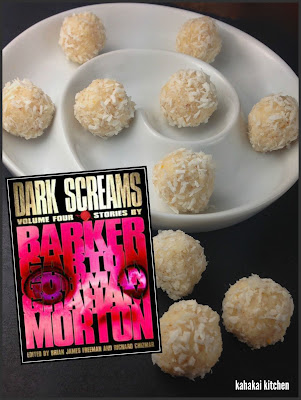 On today's TLC book tour stop, I am reviewing the horror anthology; Dark Screams, Volume 4. I am pairing my review with Coconut-Lemon Bliss Bites, a munchable sweet and tangy treat, full of good-for-you ingredients. 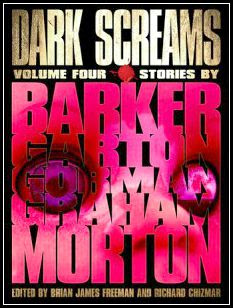 THE DEPARTED by Clive Barker
On All Hallows’ Eve, a dead and disembodied mother yearns to touch her young son one last time. But will making contact destroy them both?

CREATURE FEATURE by Heather Graham
What could be better publicity for a horror convention than an honest-to-goodness curse? It’s only after lights out that the hype—and the Jack the Ripper mannequin—starts to feel a little too real.

THE NEW WAR by Lisa Morton
Mike Carson is a war hero and a decorated vet. He doesn’t deserve to be trapped in a hospital with some black thing sitting on his chest as patients die all around him. His only hope is to take out the nurse—before it’s his turn.

SAMMY COMES HOME by Ray Garton
It’s what every family prays for: a lost pet returning home. But when Sammy, the Hale family sheepdog, appears on their doorstep, he brings back something no parent would ever wish upon his or her child.

THE BRASHER GIRL by Ed Gorman
Cindy Marie Brasher is the prettiest girl in the Valley, and Spence just has to have her. Unfortunately, Cindy has a “friend” . . . a friend who tells her to do things . . . bad things.

My Review:
I reviewed Dark Screams Volumes 2 & 3 of this series earlier in the year (you can see my review of them here) and of the three, this was the most consistent for me in terms of my enjoyment of the collection of stories. There were less high notes--such as truly scary moments, but there were also less low notes and there was no story that I didn't like. I had two clear favorites; Sammy Comes Home by Ray Gorton--about a missing sheepdog that returns to his owners with something extra and truly terrifying attached (chilling for any pet owner) and Creature Feature by Heather Graham--where the displays at a horror convention seem to come to life (could anything make you wet your pants faster than a life-size Jack the Ripper figurine coming after you?!) I wanted more of both of these stories. Heather Graham's is apparently part of a series she writes (Krewe of Hunters), which I may have to check out. Another surprise was The Departed by Clive Barker, more sentimental and almost sweet in tone with a recently deceased mother who wants to be able to touch her child once more for closure. I am more familiar with Barker's film work than his writing so this was less scary than I expected but enjoyable to read. The Brasher Girl by Ed Gorman was an intriguing story about a guy who finds the perfect girl--well except for the evil 'friend' whose voice she hears in her head and who she wants to introduce him to. The New War by Mike Carson had a Twilight Zone feel to me with an ailing veteran in a nursing home seeing a black cloud of evil that is killing the other patients and coming after him. A really good sampling overall and a nice variety of style and chill level.

----
Editor Notes:
Born in Liverpool in 1952, Clive Barker has written and produced a number of Grand Guignol plays, including The History of the Devil and Frankenstein in Love. His volumes of short fiction, Books of Blood, earned him immediate praise from horror fans and literary critics alike. He won both the British and World Fantasy Awards, and was nominated for the coveted Booker Prize, Britain’s highest literary award. His bestselling novels include The Damnation Game, Imajica, The Thief of Always, The Great and Secret Show, and Everville. He also created the now-classic Hellraiser films, as well as Nightbreed, and Lord of Illusions.

Ed Gorman, winner of numerous awards, including the Shamus, the Spur, and the International Fiction Writer’s Award, is the author of many novels, including Cold Blue Midnight and the first two Sam McCain mysteries, The Day the Music Died and Wake Up Little Susie. He has also been nominated for the Edgar, the Anthony, the Golden Dagger, and the Bram Stoker Awards. He lives in Cedar Rapids, Iowa.

New York Times and USA Today bestselling author Heather Graham has written over one hundred novels and novellas including category, romantic suspense, historical romance, and paranormal. Married since high school graduation and the mother of five, her greatest love in life remains her family, but she also believes her career has been an incredible gift. Romance Writers of America presented Heather with a Lifetime Achievement Award in 2003.
----

Food Inspiration:
There was not much if any food present in the book but I find that when I am nervously thumbing pages in my Kindle and have a good creepy book buzz going, I like to have the occasional nibble of a (usually sweet or salty) treat. For sweet snacks, chocolate is my usual choice but sometimes I like something lemony, with bright acidity and a bit of tartness. I had seen these petite Coconut-Lemon Bliss Bites on Pinterest and wanted to try them. I liked how they look--round and pale like little full moons. In The Departed, Hermione goes to see her son one more time with her companion Rice, a fellow revenant (a revenant is a person returned from the dead--I learned a new word from this story) ;-) on All Hallows' Eve. These bites are a nod to both the candy the trick-or-treaters are collecting, and to a quote about the the moon that Rice explains to Hermione:

"It's difficult to explain. But it's no accident we feel safe under the moon. We're like the moon. Reflecting the light of something living, something that loves us."

--The Departed by Clive Barker 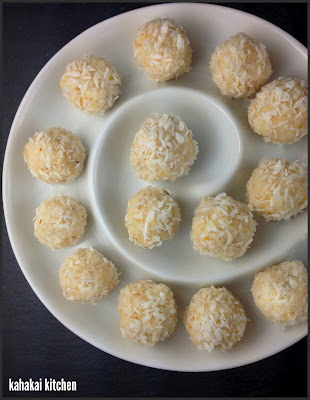 I added another half lemon's-worth of juice to give these bites more lemony flavor.

Place all ingredients into the bowl of a food processor and process about 1 minute, until fully mixed.

Line a plate or container with parchment or wax paper and place extra shredded coconut on a small plate.

Use a teaspoon to scoop mixture and roll into balls (about 1 1/2-inches in diameter). Roll each ball into the shredded coconut until covered, shake off the excess and place on prepared plate/container.

Chill in the fridge until firm. Store in covered container in fridge for about 1 week.

Notes/Results: When I first tasted these little treats, I was not that impressed with them. Left overnight in the fridge however, made them much more flavorful and I liked the way the lemon flavor came through. With the protein and healthy fats from the almonds and coconut, they are rich and satisfying and certainly a healthier alternative to the processed sugar in candy. I would make them again--with the extra lemon.


This TLC Book Tour includes a Rafflecopter giveaway for an eBook copy of Dark Screams, Volume 4, as well as an eGift Card to the eBook retailer of your choice! You can enter below for your chances to win.

Note: A review copy of "Dark Screams, Volume 4" was provided to me by the publisher and TLC Book Tours in return for a fair and honest review. I was not compensated for this review and as always my thoughts and opinions are my own.