The Book Tour Stops Here: A Review of "The Invisibles" by Cecilia Galante, Served with Dark Chocolate Pretzel Bark

Today's TLC Book Tour stop features a review of The Invisibles: A Novel by Cecilia Galante, a book about friendship and secrets. Served up with my review is a recipe for Dark Chocolate Pretzel Bark inspired by the book. 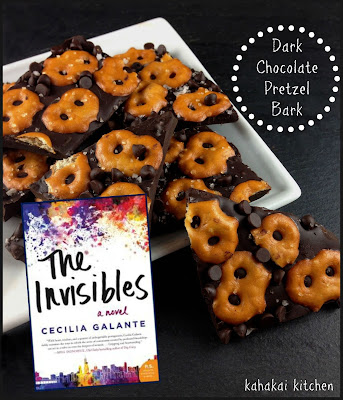 “We’ll choose to remain invisible. To everyone except each other . . . ”

Brought together by chance as teenagers at Turning Winds, a home for girls, Nora, Ozzie, Monica, and Grace quickly bond over their troubled pasts and form their own family, which they dub The Invisibles. With a fierce loyalty to each other, the girls feel that they can overcome any obstacle thrown their way. Though the walls they’ve built around themselves to keep out the rest of the world are thick, they discover one night, when tragedy strikes, that there are cracks in their tight-knit circle.

While Ozzie, Monica, and Grace leave after graduation to forge a fresh start, Nora decides to stay behind in Willow Grove. Now, fifteen years later, she’s content living a quiet, single life working in the local library and collecting “first lines”—her favorite opening lines from novels. But when Ozzie calls out of the blue to let her know Grace has attempted suicide and is desperate for them to reconvene, Nora is torn between elation at seeing the women who were once her most cherished, trusted friends and anxiety over the unresolved conflicts that will most certainly surface.

As the women gather and reminisce, the truth about their lives comes to light. And when The Invisibles decide to take the road trip they always dreamed of, they will be forced to reveal their deepest secrets and confront the night that changed them forever. 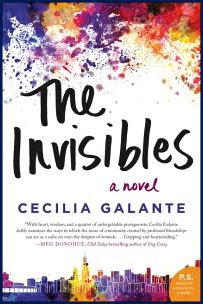 Nora has not had an easy life starting with a terrible childhood that left her as a teen at Turning Winds, a girls home. There, she becomes one of a group of four teens who name themselves The Invisibles--choosing to be invisible to everyone but each other. With Ozzie, Monica, and Grace, The Invisibles become their own family, holding secret monthly meetings where they share their talents and wants with each other and make wishes for the future under the power of the full moon. After graduation, they go their separate ways after "that night" when something awful happened and they cut ties with each other. Nora is the only one who stays in Willow Grove, working at the library, living with her dog Alice Walker, and putting up barriers with most of the world. She is surprised on her birthday with a call from Ozzie, almost fifteen years later, asking her to gather with Ozzie and Monica in Chicago to support Grace, who tried to kill herself after the birth of her child. Nora is compelled to go but is afraid of what will happen when she sees these women with whom she was once so close, but now is so distant from.

The Invisibles is a beautifully written novel about the power of friendship and how it can, in turns, both wound and heal us. The story, intertwining present day with flashbacks to the past, is told primarily from Nora's point of view, although we get to learn each character's story as they make their road trip and begin to share the secrets that they have held tightly for so many years. Their pasts--particularly their dismal family lives and lack of a present mother--have had a definite effect on their futures which becomes apparent as their stories unfold. A moment in the story that struck me as especially poignant is when they were discussing the simple things that they had to learn on their own as adults because they didn't have a mother or someone to show them like sending thank you notes, going to the dentist, using the right silverware, eating three times a day, changing bedsheets regularly, or even handling your period for the first time. They are things I never really thought about how I first learned and how you would go about learning them without a good role model of some sort to guide you through. The book covers some tough subjects like physical and mental abuse, sexual abuse, mental illness, and abortion, but it is handled sensitively and the story maintains momentum and doesn't become bogged down with tragedy. The characters come across as real and their relationships with each other, as both teens and adults, feel authentic. I loved all of their different quirks--especially Nora's collection of her favorite first lines of books.

What actually happened that horrible night that pulled them apart is slowly revealed as the group reconnects and begins to rebuild their relationships. I am not sure how much of that 'big reveal' was supposed to be a twist or surprise. I guessed pretty accurately what happened fairly early on in the story; however it did not spoil my enjoyment of the book at all as I wanted confirmation that I was right. With an interesting story and characters that are easy to care about, The Invisibles is a good mix of entertaining and touching; it made me smile, it made me tear up, and it kept me turning the pages.

Author Notes: Cecilia Galante is the author of three young adult novels, three middle-grade books, and a children’s chapter-book series. She is the recipient of many awards, including a NAIBA Book of the Year and an Oprah’s Teen Read Selection for her first novel, The Patron Saint of Butterflies. Her books have been translated into Japanese, Turkish, and Polish.

There is an interesting mix of food in The Invisibles--Birthday cake and ice cream, sprinkled with Nora's favorite candy snack of Swedish fish, and steaks for Nora and her dog, Alice Walker. There are the strange meals Ossie cooked when it was her chore rotation at Turning Winds; scrambled eggs with cut up Slim Jims--"it's the same thing as sausage and eggs!"--and peanut butter toast with sliced tomato and bacon, and even  "Popped Cereal"--popcorn and milk. There was food The Invisibles shared as teens--iced coffee and Reese's peanut butter cup cookies from The Beanery, tuna fish sandwiches on white bread and potato chips, and chocolate chip brownies after dinner. Grace's husband Henry cooks them a lunch of steaming bowls of carrot-tomato soup, small plates of arugula, roasted chicken, and goat cheese, with miniature eclairs for dessert, as well as a breakfast of perfectly poached eggs atop English muffins topped with lemony hollandaise sauce. There was the fancy (and floral) dinner at Tru that Monica's boyfriend Liam arranged for the four including multiple hors d'oeuvres, Nora's fish dish with smooth and glossy noodles and a bright red poppy overtaking the plate, Ozzie's venison braised in wine and bedecked with green leaves and purple and yellow pansies, Grace's chicken dish, "freeze-dried and flashed-fried ... settled atop a glistening puddle of cherry compote ... with small green gooseberries and an enormous pink orchid." And, there was plenty of road food--Burger King, Nutter Butters, strawberry yogurt and string cheese. So many different options to choose from to make a companion dish for my review. 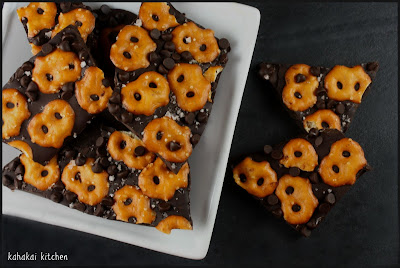 Ultimately, I took my inspiration from the first official meeting of The Invisibles. Each of the four members was supposed to bring something of their own, that shows off a talent that is theirs "and nobody else's." For Ossie it was three jokes, for Grace it was her drawings, Nora brought a favorite first book line from her collection, and Monica brought her cooking. On the night of the first meeting, Monica brought chocolate-dipped pretzels, dusted with cocoa and crushed candy cane. I fully intended to dip mini pretzel crisps into dark chocolate and garnish them with mini chocolate chips but, I misjudged the size of the mini pretzel crisps that I bought and decided they were way too small (and I am way too lazy to dip each one). Instead, I adapted, morphing the ingredients into a (much quicker and easier than dipping), Dark Chocolate Pretzel Bark. 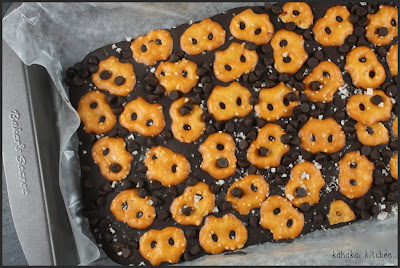 (*I used Enjoy Life's (dairy, nut, & soy-free) dark chocolate chips which are 69% cacao, their mini chips to garnish, and Snack Factory Pretzel Crisp Minis (gluten free) but you can use whatever kind of chocolate and pretzels you prefer.)

Line a small 1/2 baking sheet or pan with with parchment or waxed paper and set aside.

Place the dark chocolate chips in a microwave-safe bowl and microwave in 30-second intervals, stirring in between, until chocolate is completely melted and smooth.

Pour the chocolate into the prepared pan, spreading into an even layer with a spatula. Top with the pretzels, then sprinkle with mini-chocolate chips (aiming for the spaces between the pretzel bits) and coarse salt to garnish.

Let chocolate bark set at room temperature for about an hour, then place in the fridge for another hour to harden completely. Peel bark away from parchment and break into pieces. 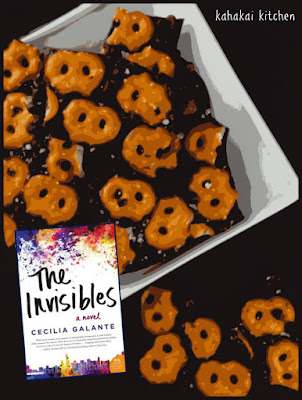 Notes/Results: Creamy dark chocolate, crunchy pretzel pieces and a touch of sea salt, this is a simple but yummy chocolate bark with a nice snap, It's perfect for when those sweet-salty cravings hit. Using vegan (& dairy, nut and soy-free) dark chocolate and gluten free pretzel crisps it's great for sharing, as even family and friends with food allergies and sensitivities can enjoy it. I'll definitely make it again.

Note: A review copy of "The Invisibles" was provided to me by the publisher and TLC Book Tours in return for a fair and honest review. I was not compensated for this review and as always my thoughts and opinions are my own.