The Book Tour Stops Here: A Review of "The Hypnotist" by Gordon Snider, Served with a San Francisco-Style Shrimp Louie Salad 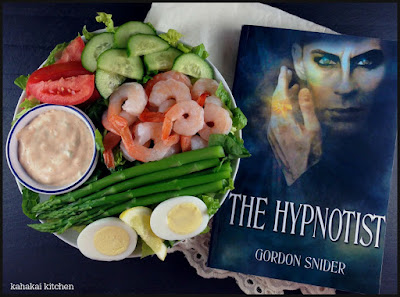 In 1906, San Francisco has reached the peak of its golden age. Fortunes have created a society that attracts European opera singers and cordon bleu chefs. It is a world defined by elegant balls, oysters, and champagne. But there are darker sides to the city as well. The Mission district south of Market Street houses tenements where shanties huddle together and rats plague the streets. And nearby sits Chinatown, an endless warren of dark alleys that offers gambling, prostitution, and opium, all controlled by vicious gangs, called tongs.

Into these disparate worlds steps Marta Baldwin, a young woman who has shunned her own social background to help the poor. She is confronted by a hypnotist, a man who hypnotizes young women from the tenements and delivers them to the tongs in Chinatown to work in their brothels. Marta escapes his hypnotic trance, but when her assistant, Missy, disappears, Marta realizes she has been taken by the evil man who confronted her. She seeks the help of Byron Wagner, one of San Francisco’s most prominent citizens. Marta finds herself drawn to Byron but knows his high social standing prevents any possibility of a relationship between them. This is confirmed when Marta discovers Byron having an intimate conversation with Lillie Collins, the daughter of one of the city’s most elite families. Marta is flushed with jealousy. However, Lillie defies social customs, and her rebellious nature fits naturally with Marta’s. Despite her envy, the two women become close friends. Marta is caught up in a whirlwind of opulent balls, opium dens and brothels, and police raids in Chinatown. She cannot deny her feelings for Byron, but she must save Missy and protect her new friends from harm. For lurking in the background is the hypnotist. He has become obsessed with Marta and will use all his guile to ensnare her. When he threatens those she loves, Marta is determined to stop him, even at her own peril. Will her boldness entrap her? If so, how can she hope to escape the man’s hypnotic embrace? Then the earth trembles, and Marta’s world will never be the same. 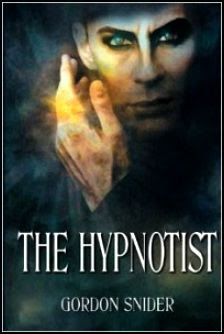 My Review: The Hypnotist is an engaging blend of history and suspense with a touch of romance and the supernatural thrown in. Both the story and Marta Baldwin, its protagonist, are interesting and appealing, as are the author's vivid descriptions of 1906 San Francisco. Marta is a strong character--using the inheritance from her father to operate her non-profit agency (the Pacific Aid Society) to help the poor and the recently immigrated. Marta grows throughout the book, gaining more independence and more courage to stand up for herself and fight for what she believes in--including keeping her home and agency after her brother's mismanagement of the family shipping business pushes them towards bankruptcy. For the most part, the female characters (Marta, her rebellious friend Lillie, and assistant Missy) come across as stronger and better developed than the male characters. Although the Hypnotist was creepy, he seemed more mentally unstable than diabolical. His portions of the story are told in first person, and while that did give a picture of what he was thinking, it also made him seem somewhat pathetic at times. Byron Wagner, Marta's love interest, was the only strong male character and he and Marta were a good pairing--although the romance wasn't essential to the story or its strongest element.

I loved the author's glimpse into San Francisco in its golden age. From his writing I felt as though I could see, hear, and even smell the city, and my pulse pounded when the great earthquake struck. The end did strike me as fairly abrupt for all of the build up. I like my ends tied up, and to know at least a little about what happens to the characters that I have grown invested in. The afterword gave an update on the earthquake and historical information about the city rather than Marta and her friends and family. I was somewhat disappointed before finding out that the author did write a sequel--so I can at least find out the details there. Overall I enjoyed the The Hypnotist and would recommend it to fans of historical fiction, mystery and suspense novels, and San Francisco history.

Author Notes: Gordon Snider has written three non-fiction books, including his latest, I’m Travelling as Fast as I Can, which takes a humorous journey to far-away-places around the world. When he moved to California’s Central Coast in 1999, he began writing fiction. The Origamist is his fifth novel and a sequel to his third, The Hypnotist, a very popular historical thriller that is set in San Francisco in 1906. The other novels include: Sigourney’s Quest, an adventure story about a woman’s harrowing journey across Tibet; The Separatist, a mystery/suspense novel set in modern San Francisco; and Venice Lost, an adventure/fantasy about a man who becomes lost in time in Venice, Italy.

Gordon has lived in California nearly his entire life. Home has ranged from Los Angeles to San Francisco, with stops in Santa Barbara and Pismo Beach. Currently, he and his wife, Fe, enjoy walking the beaches and observing the migrating whales from their home in Pismo Beach. It is, he says, the perfect setting for creative writing. Find out more about Gordon and his books on his website.

While not full of food references The Hypnotist did contain some inspiration--particularly in Chinatown where most of the meal mentions took place. There was plenty of steaming rice, fish, vegetables, pork and sausage being cooked. There was mention of the restaurants of 1906 San Francisco--French bistros serving frog legs, and German, Turkish, Mexican, and Italian eateries. Marta goes with her friend Lillie to an Italian restaurant where seafood pasta was served. In the tenements there were potatoes and the smells of cooked cabbage and baked bread. Ultimately, for my book-inspired dish, I decided to look up food in San Francisco in the 1900s and found a reference for Crab and Shrimp Louie.

"Crab Louie is a salad made with crab meat (alternatively Shrimp Louie is made with shrimp meat), which has been served in San Francisco since the early 1900s. Conflicting stories are told about the exact origins of this dish, but it is believed to be a San Francisco original. Along with the seafood meat, hard-boiled eggs, tomatoes, asparagus, cucumber, and lettuce such as Romaine or iceberg are included. The mixture is tossed with Louie dressing, which is made from mayonnaise and chili sauce, and seasoned with peppers. A modern variation on this salad uses Thousand Island dressing instead."

--From California Food at Maps of the World.com 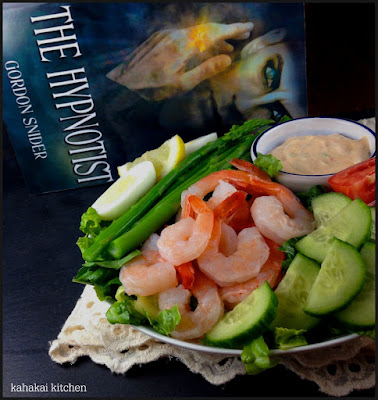 The "conflict" mentioned in the article comes from the origin of the "Louie" or Louis Salad as both San Francisco and Seattle lay claim to its invention. I have no particular knowledge or strong opinion on which city is correct, but for our purposes today, we are going to go with San Fran. (Sorry Seattle!) Whoever invented it deserves kudos because it is a tasty salad. (It was my mom's favorite.) The fact that it appeared on restaurant menus in the early 1900s sealed the deal, along with the nasty humidity we are having here, as a crisp cold salad sounded perfect for dinner. 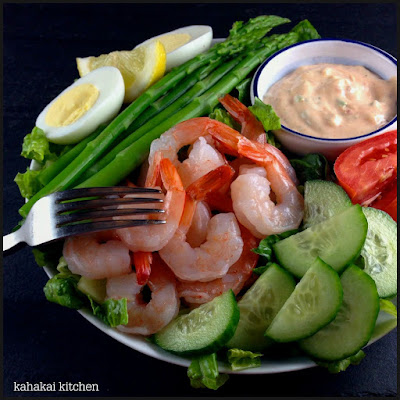 You'll find several variations of crab and shrimp Louies on the web--some have avocado or olives, some use Thousand Island dressing, and there are many variations of Louis dressing as well. I put together a fairly classic salad but lightened up the mayo dressing with yogurt. I also didn't have the green pepper that several articles and the Better Homes and Garden's Cookbook listed as an ingredient for Louis dressing so I made sort of a Louis/Thousand Island dressing hybrid. Might not be tradition, but it tasted great! ;-)

Divide the ingredients between two large salad plates, starting with the romaine and arranging the other ingredients on top. Top with the dressing (recipe below) or serve it alongside the salad in a small bowl. Enjoy!

Whisk together mayo, yogurt and chili sauce until smooth and creamy. Stir in the sweet pickle relish, green onion and lemon juice. Taste for seasoning, adding salt and pepper to taste. 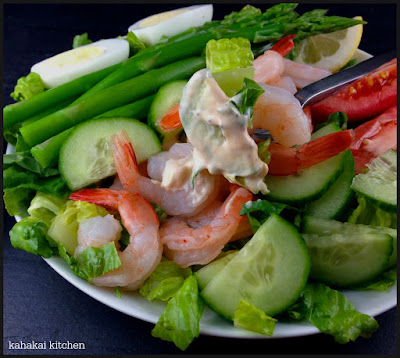 Notes/Results: This salad meal completely hit the spot for dinner with the hot and humid weather we have been having this month. All of the ingredients were crisp, cold and fresh, and the zippy and creamy dressing was perfect for dipping bites in. ;-) I used a small plate for photo purposes but a larger plate allows for mixing up the ingredients without mess as you eat. My mom would have definitely approved this one. I will happily make it again. 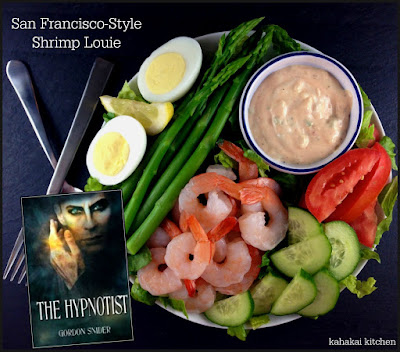 Note: A review copy of "The Hypnotist" was provided to me by the publisher and TLC Book Tours in return for a fair and honest review. I was not compensated for this review and as always my thoughts and opinions are my own.