On today's TLC Book Tour stop, I am revisiting the characters from a favorite foodie book series and reviewing Baker's Blues by Judith Ryan Hendricks. I'm pairing my review with a delectable breakfast dish of "jewel green spinach topped by two perfect sunny-side-up eggs" that is inspired by the book. 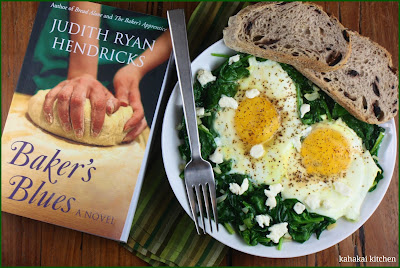 In Wyn Morrison’s world a 5 AM phone call usually means problems at her bakery—equipment trouble or a first shift employee calling in sick—annoying but mundane, fixable. But the news she receives on a warm July morning is anything but mundane. Or fixable.

Mac, her ex-husband, is dead.

Ineligible for widowhood, Wyn is nonetheless shaken to her core as she discovers that the fact of divorce offers no immunity from grief. Friends and family are bewildered by her spiral into sadness, Mac’s daughter Skye blames her for his death.

For the last several years Wyn has been more businesswoman than baker, leaving the actual bread making to others. Now, as she takes up her place in the bread rotation once more, she will sift through her memories, coming to terms with Mac and his demons, with Skye’s anger, and with Alex, who was once more than a friend. Soon she will re-learn the lessons of bread that she first discovered at the Queen Street Bakery in Seattle…bread rises, pain fades, the heart heals, and the future waits. 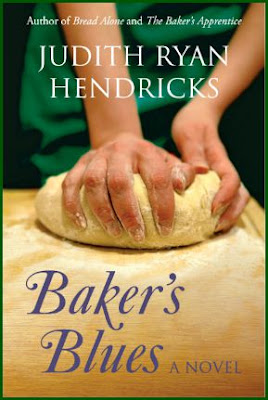 My Review:
Judith Ryan Hendrick's first book (and the first book in this series following Wynter (Wyn) Morrison), Bread Alone was one of my first forays into the world of foodie fiction. I quickly devoured it, waited for the followup--The Baker's Apprentice, and also scooped up her other two books (not in the series) Isabel's Daughter and The Laws of Harmony. In the years in between, I would think about these books and look to see if the author had written another. It was a LONG six years of being disappointed, so when I saw Baker's Blues on a list of upcoming TLC Book Tours and found out it continued Wyn's story, I clamoured to be on the tour. It was worth the wait. Judith Ryan Hendricks has created a wonderful world with Wyn, her friends, family and of course the food, because the way the author writes, the food almost becomes its own character. She so lovingly describes the food in a vivid and very detailed way (that so many authors don't) which both completely feeds (pun, fully-intended) my food geekiness as well as leaves me hungry and craving whatever the characters are eating. Her characters are drawn equally well, created with multiple layers, and they quickly find their way to your heart. This is good because I love characters that I can connect to, and it's bad because it makes me care too much. In this case, I spent most of Baker's Blues feeling sad, disappointed, and occasionally mad at/about Mac, Wyn's ex-husband, who has drowned at the start of the book. (This isn't a spoiler as you can read it in the book blurb and in the first pages of the book itself.) I love Wyn, I loved Mac, I loved Wyn and Mac. Since the book is told in three parts, the now--with Mac's death, the then--the events leading up to Mac's death and how he became Wyn's ex-husband, and the after--Wyn's grieving and healing time after his death, it was really like going through the sad breakup of two good friends and then losing one. So mostly kudos to the author for making me so emotionally invested, but a small knock on the head for making me emotionally overwrought. ;-) I kid (slightly), lest you think I am an emotional basket case who can't tell fiction from reality, or you think I considered the book to be all doom and gloom. The book is about life and Wyn's journey--it is real, has heart, and humor, Wyn's often funny friends and supporters, and all of that mouthwatering bread and food--so well worth my bouts of angst.

If you have not been pulled into Wyn's life and the world that Judith Ryan Hendricks has created in her Bread Alone series, I suggest you start with the first two books before starting Baker's Blues. It isn't that Baker's Blues can't stand alone, but your appreciation of the story and the characters will be much improved by starting at the beginning. Since it had been quite a few years since I read the series, I went back and skimmed The Baker's Apprentice to catch myself up. When time allows, I will go back to Bread Alone as well. And, fingers crossed that I won't be waiting another six years for the next Judith Ryan Hendricks book!

Author Notes:Judith Ryan Hendricks was born in San Jose, California, when Silicon Valley was the Santa Clara Valley, better known for orchards than for computer chips. Armed with a degree in journalism, she worked as a journalist, copywriter, computer instructor, travel agent, waitress and baker before turning to fiction writing. Her experiences at the McGraw Street Bakery in Seattle led to her first novel, Bread Alone and the sequel, The Baker’s Apprentice. A life-long infatuation with the Southwest provided inspiration for Isabel’s Daughter and her fourth book, The Laws of Harmony. Hendricks’ fiction has been translated into 12 languages and distributed in more than 16 countries worldwide. Her nonfiction has appeared in The San Francisco Chronicle and Tiny Lights, A Journal of Personal Essay, Grand Gourmet in Italy and The London Sunday Express. Her short fiction has appeared in Woman’s Weekly in Britain and AMERICAN GIRLS ON THE TOWN, an anthology, in the U.S. and U.K. She lives in New Mexico with husband Geoff and dog Blue. 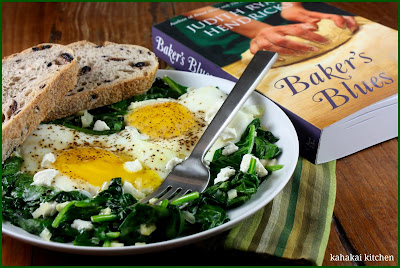 Baker's Blues is filled with food inspiration of course and not just of the baked persuasion--which is good because I am not much of a baker and it's been WAY TOO hot to turn on the oven. Once I read the passage where Alex cooks Wyn a breakfast of spinach and eggs, I immediately knew that it was what I wanted. I am of the mind that a fried egg with a runny yolk is the perfect topping for any dish and I frequently throw some greens in a pan and crack some eggs in there for breakfast, lunch or dinner. So, as many different ways that I could of gone in making a dish inspired by Baker's Blues, this is the one that got stuck in my head.


"He turns on the flame under a sauté pan and tosses in a knob of butter, tilting the pan from side to side.

The stove is so hot that the butter's foaming as soon as it melts. He tosses chopped garlic into the pan and the air is instantly full of one of my favorite smells.

He throws a few handfuls of spinach in with the garlic. After a very few seconds, it's slightly wilted and he pushes it to the outer edges of the pan leaving space for four eggs. "Can you drop a couple of pieces of bread in the toaster?"

In five minutes we're sitting at the table. In front of us are two plates of jewel green spinach topped by two perfect sunny-side-up eggs with deeply golden yolks. A few crumbles of goat cheese softening on top and a piece of warm whole wheat toast on the side.

The combination of warm egg yolk and spinach is like swallowing silk. I stop eating for a minute just to enjoy the sensation."
--Baker's Blues by Judith Ryan Hendricks 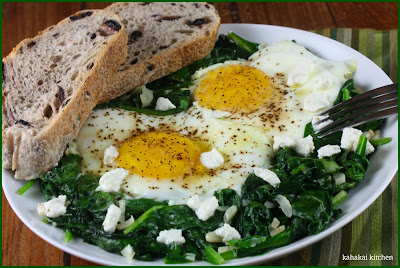 How can you resist that poetic description? I couldn't. And, what better way to get an entire 6-ounce bag of spinach in one serving? I made the dish as Judith Ryan Hendricks described it-- a knob of butter, chopped garlic (I used about 3 cloves worth), handfuls of spinach, sunny-side-up (local) eggs, crumbles of good goat cheese scattered about, and toasted bread (mine was a deliciously chewy olive loaf). Of course I added a sprinkle of salt and freshly ground black pepper on top. As Wyn noted above, each bite was "like swallowing silk." 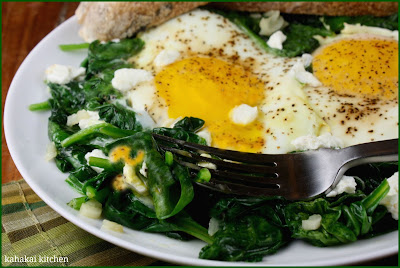 Notes/Results: I ate my spinach and eggs for Sunday brunch, but I would be perfectly happy with this as dinner or lunch. I don't often buy and add goat cheese to my eggy meals but I may have to more often. My neighborhood supermarket did not have local goat cheese (from Maui) in stock, so I used Cypress Grove Chevre's Purple Haze (dusted with lavender and fennel pollen) which softened beautifully on the warm spinach and eggs. The dense, chewy and slightly briny olive loaf that I had on hand was the perfect accompaniment. My stomach, and my soul were happily satisfied. 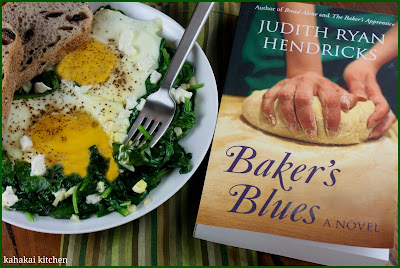 Note: A review copy of "Baker's Blues" was provided to me by the publisher and TLC Book Tours in return for a fair and honest review. I was not compensated for this review and as always my thoughts and opinions are my own.