The Book Tour Stops Here: A Review of "The Antigone Poems" by Marie Slaight, Paired with a Recipe for Classic Greek Salad (Salata Horiatiki)

And now for something a little different... Here's the thing, I don't read a lot of poetry. I appreciate a well-crafted poem, I have taken the assorted poetry class, and I have come across the occasional poem that speaks to me--but I seldom seek out books of poetry to read. So, when Lisa from TLC Book Tours was looking for reviewers of "The Antigone Poems" by Marie Slaight, I decided to expand my reading horizons and signed up. Paired with my review of this stark and haunting book is a classic Greek Salad (Salata Horiatiki). 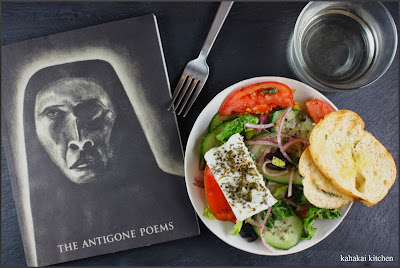 Featuring poetry by Marie Slaight and charcoal drawings by Terrence Tasker, The Antigone Poems was created in the 1970’s, while the artists were living between Montreal and Toronto. An intensely personal invocation of the ancient Greek tale of defiance, the illustrations and poetry capture the despair of the original tale in an unembellished modernized rendition. The Antigone Poems provides a special expedition into the depths of the ancient Sophocle tragedy while questioning power, punishment and one of mythology’s oldest themes: rebellion.

To learn more about The Antigone Poems, please visit TheAntigonePoems.com. 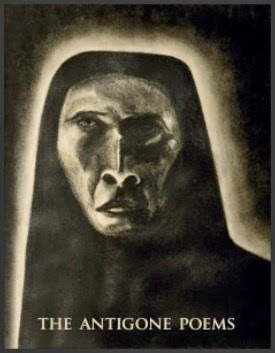 This is a gorgeous book. Small, paperback, but elegant, with thick creamy paper. Both the poems and the illustrations have a stark sort of beauty to them; the sparse charcoal drawings adding to the haunting tone of the words. My Greek mythology is a bit rusty so I had to look up Antigone, about whom these poems are based, and reread her story. If you are not familiar, the short version is that Antigone was born of the incestuous relationship of Oedipus and his mother Jocasta, and seeking a proper burial for her brother, she defies a law set by her uncle and buries him. Antigone is then imprisoned in a cave where she kills herself. The poems and drawings are meant not only to reflect Antigone's despair, rebellion, and punishment, but to also show the suffering of all women over the ages. One gets the feeling that the author's passion and pain are also wrapped within.

Most of the poems are short, like the example below:


All love pains
Are an aged protest
Wanting fresh surge;
Decrying the ancient throb
Of memories.

They are somewhat unsettling, dark and wild. Interesting to read, then go back and read again, savoring the words. I found myself thinking about them afterward--which to me is what a good poem is meant to do. Now I am not going to pretend to be a poetry critic, I can just tell you that I found these poems interesting, evocative, and moving. Although not a book I normally would have selected to read, I found The Antigone Poems truly fascinating and well worth the time. It is interesting to me that this collaboration was done back in the 1970's and was never released until now as there is such a timeless feel to it. Lovers of poetry, Greek mythology, visual arts, and those looking for something a bit different will enjoy this unique and beautiful book. 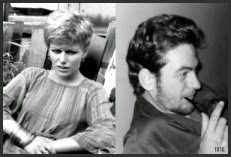 Author Notes: Marie Slaight (1954-) has worked in Montreal, New Orleans, and Buenos Aires as a writer, producer, and performer. Now based in Sydney, Australia, her poetry has appeared in American Writing, Pittsburgh Quarterly, Poetry Salzburg, The Abiko Quarterly, New Orleans Review and elsewhere. Slaight is currently the director of Altaire Productions & Publications, a Sydney-based arts production company, which has been involved in such films as the award-winning documentary Bury the Hatchet, Kindred and Whoever Was Using This Bed.

Artist/Illustrator Notes: Terrence Tasker (1947-1992) was born in Saskatchewan, Canada. Raised in rural western Canada, he went on to become a self-taught artist and filmmaker. He co-founded and built the original Studio Altaire, a 90-seat theater and visual art gallery that also ran after hours jazz concerts in downtown Montreal. He worked as a set builder as well as working in construction, mining, finance, industrial installations, taxi driving and film projectionist. He created the artwork for The Antigone Poems in the 1970s, while living in Montreal and Toronto. 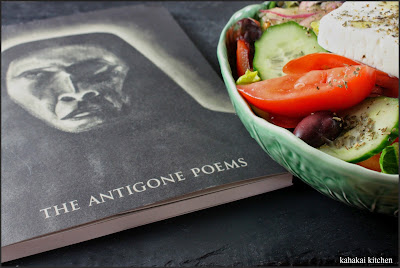 So, obviously not a book with food themes, I had to take a broader inspiration from The Antigone Poems. I wanted a classic Greek dish and first settled on Saganaki (fried cheese), because of the references to fire in the book. I had some challenges finding the right cheese--Kasseri, and although I could have substituted the easier to find Halloumi, instead I decided I was craving a classic Greek Salad. I used a simple Tessa Kiros recipe from Food From Many Greek Kitchens, a favorite cookbook of mine. Kiros notes to use good quality tomatoes and olive oil for this salad and to be sure to soak up the juices at the bottom of the bowl with bread. 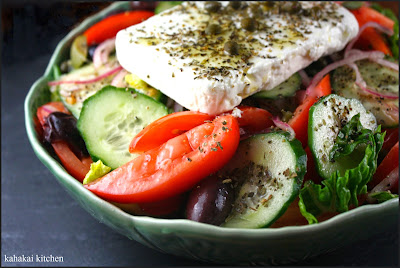 Put the tomatoes, cucumber, onion, olives and capers into a serving bowl. Add the purslane (romaine) and season with a little salt and a few grinds of pepper. Put the feta on top and crumble the oregano over with your fingers. Drizzle the olive oil over and the vinegar if using. Serve with bread. 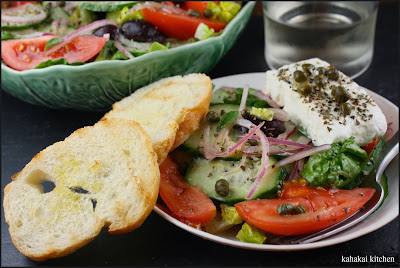 Notes/Results: A simple Greek salad that hit the spot. Salty, tangy, sweet from the tomatoes, briny olives and capers--it was perfect with grilled bread and a glass of crisp white wine. I would have loved to have the purslane--sometimes I can get it locally at the farmers market, and I'll make it again the next time I come across some. I used a small head of local baby romaine in its place, along with local Roma tomatoes and cucumber. I also pickled my red onion in the olive oil and red wine vinegar before using them--I like the softened flavor. Extra capers make me happy, as did the very creamy French sheep's milk Feta I used. Just a great little salad that I will happily make again. 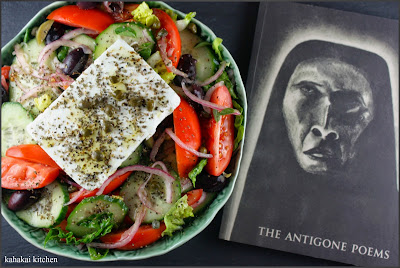 This post with its Tessa Kiros recipe is linking up to Potluck week at I Heart Cooking Clubs where we have the opportunity to cook a recipe from our current chef, Jacques Pépin or any of our former IHCC chefs. You can see what recipes and chefs the other IHCC participants chose to may by checking the picture links on the post. 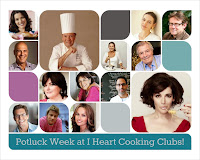 Note: A review copy of "The Antigone Poems" was provided to me by the publisher and TLC Book Tours in return for a fair and honest review. I was not compensated for this review and as always my thoughts and opinions are my own.