The Book Tour Stops Here: A Review of 'Finding Jake' A Novel by Bryan Reardon

If you are a regular reader of this blog, you are used to seeing book reviews accompanied by a recipe inspired by the book. Unfortunately, personal life stuff has kept me away from home and blogging much so for today's TLC Book Tour stop for Finding Jake by Bryan Reardon, there's no food. But, there is a compelling and suspenseful novel about a family, a father, and what happens when a school shooting may involve their missing teenage son. 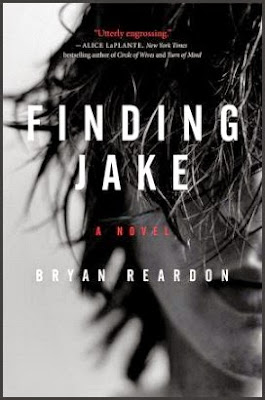 A heart-wrenching yet ultimately uplifting story of psychological suspense in which a parent is forced to confront what he does—and does not—know about his teenage son.

For sixteen years, Simon Connelly’s successful wife has gone to her law office each day, while he has stayed home to raise their children. Though Simon has loved taking care of Jake and Laney, it has cost him a part of himself, and has made him an anomaly in his pretty, suburban neighborhood—the only stay-at-home dad among a tight circle of mothers.

Shepherding them through childhood, the angst-ridden father has tried to do the best for the kids, even if he often second-guesses his choices. For sunny, outgoing Laney, it’s been easy. But quiet Jake has always preferred the company of his books or his sister to playdates and organized sports. Now that they are in high school, Simon should feel more relaxed, but he doesn’t. He’s seen the statistics, read the headlines.

Then, on a warm November day, he receives a text: There has been a shooting at the high school.

Racing to the rendezvous point, Simon is forced to wait with scores of other anxious fathers and tearful mothers, overwhelmed by the disturbing questions running through his head. How many victims were there? Why did this happen? One by one, parents are reunited with their children. Their numbers dwindle, until Simon is alone. Laney has gone home with her mom. Jake is the only child missing.

As his worst nightmare unfolds, Simon begins to obsess over the past, searching for answers, for hope, for the memory of the boy he raised, for the mistakes he must have made, for the reason everything came to this. Where is Jake? What happened in those final moments? Is it possible he doesn’t really know his son? Or he knows him better than he thought? Jake could not have done this—or could he?

As rumors begin to ricochet, amplified by an invasive media, Simon must find answers. But there is only one way to understand what has happened . . . he must find Jake.

A story of faith and conviction, strength and courage, love and doubt that is harrowing and heartbreaking, surprisingly healing and redemptive, Finding Jake asks us to consider how well we know ourselves . . . and those we love.

Finding Jake is a book that pulled me in from the start and didn't let me go; quickly and quietly building the suspense as the story unfolded. Told from the point of view of Simon Connelly, stay-at-home-father and part-time freelance writer, it follows the days after a horrific school shooting interspersed with of snippets from Jake's childhood. Simon isn't entirely comfortable with his role in a neighborhood where the bulk of the stay-at-hone parents are mothers. He struggles with things like group play-dates and over-analyzes the parenting decisions he makes, afraid that his choices are negatively impacting mostly Jake, but also his younger sister, Laney. Jake is an introvert, quiet and more solitary, while Laney makes friends easily with her outgoing personality. Rachel, Jake's wife, is a successful attorney with a busy schedule and the couple has pulled apart from each other over the years. Despite all of his angst, Simon has done his best to raise good kids who are kind to others, although Jake's befriending a social pariah classmate causes Simon much discomfort as he wars with his desire to prevent his son from spending time with Doug, who makes Simon uncomfortable. When Doug is quickly named as the school shooter and Jake is identified as having been with Doug and is now missing, Simon looks to both the past and present for answers and to find his son. When the media, neighbors, police, and even friends, seem convinced of Jake's guilt, Simon finds his confidence in Jake wavering and his own guilt building.

Finding Jake was well-paced with the under 300 pages seeming to fly by--in fact I wanted more. The author's back and forth--a glimpse of current events followed by a look back at Jake's childhood, kept me engaged and trying to guess the truth of what really happened. Because Simon is the narrator, the reader gets only his perspective which makes it hard to get to know the rest of the Connelly's--Rachel, Laney, and especially Jake, however, I think it worked in this story as it allows the reader to make assumptions and judgements and keeps the tension building. Although not always an easy book to read with the all-too-real horror of a school shooting and the utter devastation of a family caught up in an unimaginable situation, Finding Jake is a book that will suck you in and keep you thinking long after the last page is turned.

Bryan Reardon is a freelance writer specializing in medical communications. He co-wrote Ready, Set, Play with retired NFL player and ESPN analyst Mark Schlereth and Cruel Harvest. Prior to becoming a full-time writer, Bryan worked for the State of Delaware for over a decade, starting in the Office of the Governor. He holds a BA in psychology from the University of Notre Dame and lives in West Chester, Pennsylvania, with his wife, kids, and rescue dog, Simon.
Connect with Bryan on Facebook.

Note: A review copy of "Finding Jake" was provided to me by the publisher and TLC Book Tours in return for a fair and honest review. I was not compensated for this review and as always my thoughts and opinions are my own.