The Book Tour Stops Here: A Review of "Love is Red" by Sophie Jaff, Served with Penne with (Vegan) Sun-Dried Tomato Cream Sauce

Love is Red, and so is the Penne with Sun-Dried Tomato Cream Sauce that I am serving up today, inspired by this unique and completely absorbing new novel by Sophie Jaff. So pull up a fork and get ready for a book review and a recipe for today's TLC Book Tour stop. 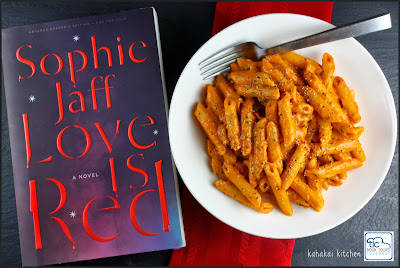 This electrifying, addictive, and hypnotically beautiful debut spins suspense and literary fantasy into a stunning epic—the first volume in the Night Song Trilogy—ablaze with fear, mystery, and possibility.

Katherine Emerson was born to fulfill a dark prophecy centuries in the making, but she isn’t aware that this future awaits. However, there is one man who knows the truth: A killer stalking the women of New York, a monster the media dubs the “Sickle Man” because of the way he turns his victims into canvasses for his mesmerizing, twisted art.

Unleashed upon Manhattan after lying dormant for centuries, the Sickle Man kills to harvest the precious hues of his victims. As his palette grows, so too does his power. Every death brings him closer to the one color, and the one woman, he must possess at any cost.

While the city hunts the Sickle Man, Katherine must decide what to do about two men who have unexpectedly entered her life: handsome and personable David, and alluring yet aloof Sael. Though she’s becoming increasingly torn between them, how well does she really know them? And why is she suddenly plagued by disturbing visions?

Told from the alternating viewpoints of Katherine and the Sickle Man, Love Is Red is a riveting thriller that unfolds into an intense story of obsession and control, desire and fate. Katherine may not realize it yet, but with this haunting novel—as arrestingly original as Marisha Pessl’s Night Film, Patrick Süskind’s Perfume, and Lauren Beukes’s The Shining Girls—her moment of awakening is here. And soon she will find herself fighting a battle at the edges of our world, among forces more dangerous than we can possibly imagine 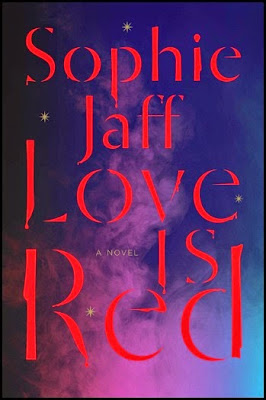 Love is Red is such a unique book--a combination of mystery/thriller and romance along with a sprinkling of fantasy and paranormal. The story is told by Katherine, a young woman living in New York City with her roommate Andrea and Andrea's young son Lucas, and she has just begun seeing two very different men. David is sweet and attentive and his friend Sael is mysterious, cocky, and somewhat distant. Alternatively, we get the chilling perspective of the Sickle Man, the serial killer who is terrorizing the city with his macabre murders. The Sickle Man sees emotions as colors ("Love is red. A little green, a little gold, but love--real love, true love, divine love--that love is red.") As he murders young women (and leaves their bodies with intricate carvings--yikes!), the Sickle Man is "collecting" their different colors while waiting for Katherine, his ultimate conquest, to be ready for him. It is difficult to explain too much more about the book without giving spoilers, and trust me, you will want to read it for yourself.

Love is Red had my pulse pounding from the start, and it occasionally had me scratching my head while I was trying to figure out just what was happening with the many plot twists and the weaving in of a tale of a mysterious medieval maiden. I had forgotten until I was finishing the book that Love is Red is the first book in a trilogy. That being said, it thankfully doesn't end on an annoying cliffhanger, but it did leave me with plenty of questions and wanting more. If you want a book that is intriguing and a bit different, with a story that will draw you in quickly and not let go, grab a copy of this one.

Author Notes: A native of South Africa, Sophie Jaff is an alumna of the Graduate Musical Theatre Writing Program at Tisch School of the Arts, New York University, and a fellow of the Dramatists Guild of America. Her work has been performed at Symphony Space, Lincoln Center, the Duplex, the Gershwin, and Goodspeed Musicals. She lives in New York City. 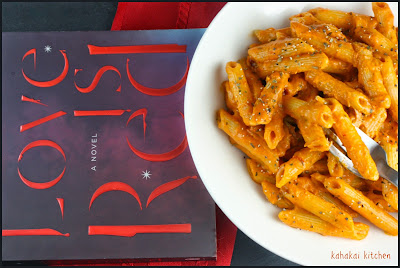 Gruesome murders don't often inspire thoughts of food for me, but there was actually a fair amount of food mentions in Love is Red. Different restaurants, the description of the items in a gourmet grocery store that one of the Sickle Man's victims loved, and the food that Katherine makes all brought inspiration. In the end, I chose to make a tomato-based pasta--both for its red color, and because Katherine cooks a dinner for David, her roommate and her son, and Sael, who David brings along. It is a happy and normal evening, so different from most of the book.

"Mismatched bowls on place mats, the sauce, tomato-based and basic, steaming, pasta and some bread. A good smell, a cheerful smell. There's still a bottle of wine to go. There is candlelight. Talk is easy. I laugh. I feel my shoulders descending. It's a wonderful evening. Four adults and a child, content a Saturday night. We do not talk of how many women they've found, or Andrea's job. We speak of broad general things, the weather, movies, books, past summers, and memories. David is kind, Seal is attentive, and Andrea is delighting in their company.

And just in this moment I am happy." 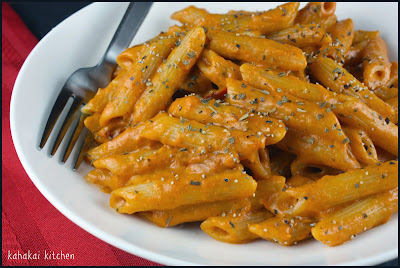 I wanted something simple but indulgent so I turned to Chloe's Vegan Italian Kitchen by Chloe Coscarelli and a recipe for a creamy pasta dish I have had tagged to make for a while now. It's a great pantry recipe and quick and easy to make.

Chloe says, "If there was such a things as fine-dining comfort food, this would be it! It's addictive and crave-inducing like macaroni and cheese, but it's elegant and classy with the slick penne and flecks of sun-dried tomatoes. Fit for all occasions, this will be your new "it" pasta."

Bring a large pot of salted water to a boil. Add penne and cook according to package directions. Right before draining, add 1/2 cup of sun-dried tomatoes to the boiling water. Drain pasta and return to the pot.

Meanwhile in a medium saucepan, make a roux by whisking the oil and flour over medium heat for 3 to 5 minutes. Then add almond milk, nutritional yeast, tomato paste, salt, garlic powder, basil, and red pepper to the saucepan and bring to a boil, whisking frequently. Reduce heat to low, add the remaining 1/2 cup sun-dried tomatoes, and let simmer until the sauce thickens. Transfer to a blender and blend until smooth.

Add sauce to pasta and toss to coat. Season to taste and serve immediately.

Cooking Note: If sauce thickens too much as it sits, reconstitute by adding a little bit of nondairy milk. Stir over medium heat until smooth. Adjust seasoning to taste. 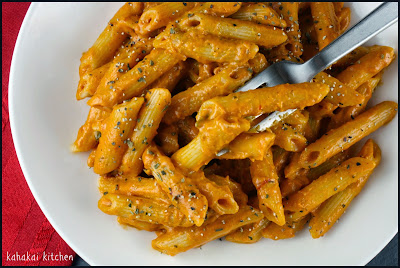 Notes/Results: This pasta tastes so much more decadent than its ingredients would lead you to believe. The thick sauce is smooth and very silky. I did need to add extra almond milk to thin it a bit. I liked the slightly tangy sweet flavor of the sun-dried tomatoes and it also has a a very cheesy essence--a bit surprising since it only has a a quarter cup of nutritional yeast. Just a good and simple dish that hits the spot when comfort food is needed. I would make it again. 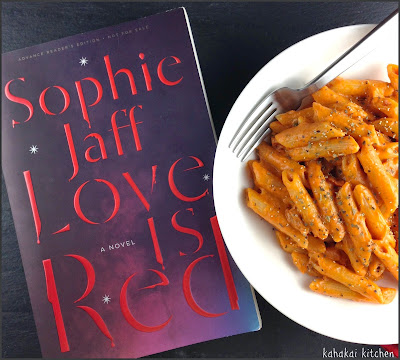 Note: A review copy of "Love is Red" was provided to me by the publisher and TLC Book Tours in return for a fair and honest review. I was not compensated for this review and as always my thoughts and opinions are my own.