The Book Tour Stops Here: A Review of "The Case of The Invisible Dog: A Shirley Homes Mystery" by Diane Stingley, Served Up with a Recipe for Cinnamon-Apple & Almond Topped Waffles (+ Ebook & EGiftcard Giveaway!)

What if the famous detective Sherlock Holmes was not a fictional character, but instead was a real person and the world was led to believe he wasn't real as part of a conspiracy to whitewash his existence out of history? And what if your new boss was convinced that she was his great-great-granddaughter, and she wanted to use her superior intellect to follow in his footsteps and solve crimes? Is she eccentric? Is she crazy? Should you try to find another job?

On today's TLC Book Tour stop, "The Case of The Invisible Dog: A Shirley Homes Mystery" by Diane Stingley, introduces us to the very unique Shirley Homes, and her assistant Tammy, and kicks off a new cozy mystery series. I'll be reviewing the book, cooking up a decadent breakfast treat inspired by it, and offering a chance for a lucky reader to win an eBook copy of the book, along with a $25 eGiftcard. 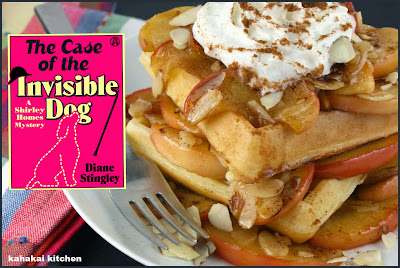 In the start of a charmingly imaginative cozy series sure to delight fans of Carolyn Hart and Diane Mott Davidson, Diane Stingley introduces a blundering detective who believes herself to be the great-great-granddaughter of the legendary Sherlock Holmes.

After failing to launch her career as a Hollywood actress, Tammy Norman returns home to North Carolina, desperate for a regular paycheck and a new lease on life. So she accepts a position assisting Shirley Homes, an exceptionally odd personage who styles herself after her celebrated “ancestor”–right down to the ridiculous hat. Tammy isn’t sure how long she can go on indulging the delusional Shirley (who honestly believes Sherlock Holmes was a real person!), but with the prospect of unemployment looming, she decides to give it a shot.

Tammy’s impression of her eccentric boss does not improve when their first case involves midnight romps through strangers’ yards in pursuit of a phantom dog—that only their client can hear. But when the case takes a sudden and sinister turn, Tammy has to admit that Shirley Homes might actually be on to something. . . . 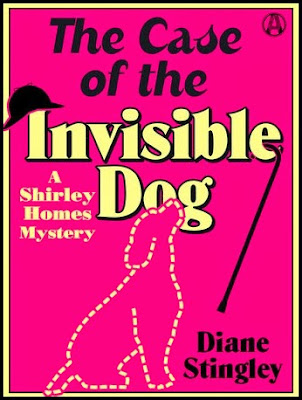 The Case of the Invisible Dog is more farce than mystery with the socially inept Shirley Homes (who by the way, is not a very good detective) and her assistant and modern-day "Watson" Tammy, struggling to solve a strange case and a resulting murder than seemed pretty obvious to me. But, if you don't need a deep plot and a serious mystery in your book, there is much fun to be had with the concept and the characters in this new series. I liked Tammy right off the bat--she has some good snarkiness and combines it with common sense--despite some of her life choices. Even while she isn't sure whether to take a month's severance and run, or stay and work with Shirley, she is a master at dealing with Shirley's unique personality. Shirley Homes was harder to connect with, coming off as unlikable at first with her pompous comments about the superiority of her brain as compared to everyone else, without much to back up her claims. Still, in time glimpses of her softer side appear, and I found myself enjoying her--although I think I would like her ineptitude dialed down just a notch or too in the future. The other characters; Shirley's sister Myra, cabdriver and detective-wanna-be Lawrence, doubting Police Detectives Owen and Addams, and the mysterious Dr. Morgan who keeps popping up, seem promising for future books in the series. Although the mystery behind the invisible dog and the murder of Shirley and Tammy's first client were not that difficult to figure out, there were some plot twists and turns at the end that kept me engaged and will have me looking for the next book. Overall an enjoyable read.

-----
Author Notes: Diane Stingley is the author of Dress You Up in My Love and I’m With Cupid. She was also a columnist for The Charlotte Observer and received e-mails from around the country in response to her columns. She currently resides in North Carolina and is hard at work on the next Shirley Homes mystery.
-----

Most of the food in The Case of the Invisible Dog revolves round two places--The Waffle Barn, the local diner, and the Hobson's Bakery, the restaurant downstairs from Shirley's office. Grumpy Mrs. Hobson serves donuts (the bear claws are a standout) and fresh soups, sandwiches, salads and breads. Shirley and Tammy seem partial to her chicken noodle soup and her pumpkin bread. The Waffle Barn is open late and serves breakfast--bacon, eggs, hash browns, and the "Barn Buster" waffles, that the menu describes as 'lighter than air.' Shirley orders her waffles with extra butter and syrup on the side. She soon becomes practically addicted to them and to be honest, all of the mentions of waffles in the book had me drooling over them the entire time I was reading. I usually have a box of waffles in the freezer for the very occasional craving, and I worked my way through half a box as I made my way through the book. So, I knew that my dish inspired by The Case of the Invisible Dog just had to be a waffle.

My favorite way to enjoy a waffle is with a little melted butter and maple syrup, drizzled so it goes into each little square, and while it is still warm--sprinkling the crevices with mini dark chocolate chips--letting them get a bit melty. Since I don't own a waffle maker and use frozen waffles, I wanted to fancy things up a bit and make a waffle house-style specialty with a warm and decadent topping. 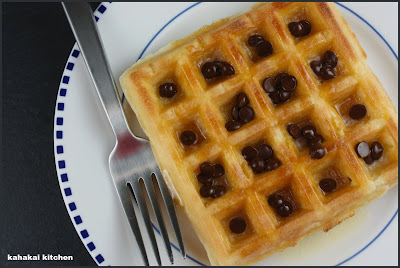 What I indulged in too much while reading this book!

Since Shirley's two food addictions seemed to be waffles and bear claws (much better than her great-great-grandfather's cocaine use), I wanted to incorporate the cinnamon and almonds (and occasional apples) found in a bear claw pastry into a topping for some frozen Belgian waffles. If you do possess a waffle iron by all means make homemade waffles, but if you don't, no worries. By the time you get the sweet and delicious apple & almond topping mixture on the waffles, no one will notice they aren't homemade. ;-) 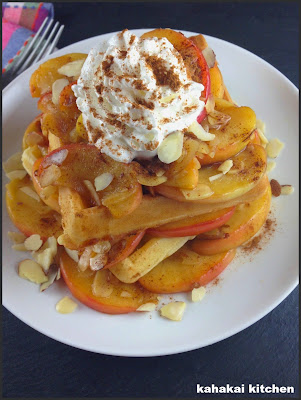 Meanwhile, melt the butter in a saute pan and add brown sugar, maple syrup, almond extract and salt. Stir and cook over medium heat, adding the apples as it starts to bubble. Cook the apples until they are soft and golden, about 5-7 minutes. Stir in the almonds and cook another minute or two.

Enjoy with yogurt, over ice cream or as a topping for waffles. Enjoy! 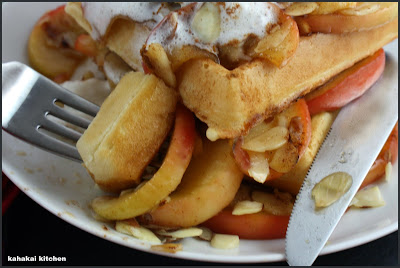 Notes/Results: Decadent and sweet--cinnamony, nutty, apple-goodness in every bite. This isn't a breakfast that I would indulge in often, but with the warm topping and squirt of whipped cream, it was definitely reminiscent of a waffle house splurge. Honeycrisp are my favorite apple and their blend of sweet and tart was perfect for the dish. Adding in the almonds at the end, kept some of their crunch which was a good contrast for the softer apples. I used Belgian waffles here, but Eggo makes a cinnamon waffle that would work really well with this topping. I will happily make these again. 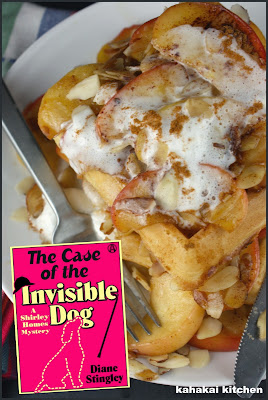 ***Giveaway!!!***
Hey eBook Fans!  This tour includes a Rafflecopter giveaway for a $25 eGift Card to the eBook Retailer of the winner’s choice plus an eBook copy of The Case of the Invisible Dog. Enter for your chance to win below:

a Rafflecopter giveaway
Note: A review copy of "The Case of the Invisible Dog" was provided to me by the publisher and TLC Book Tours in return for a fair and honest review. I was not compensated for this review and as always my thoughts and opinions are my own.