The Book Tour Stops Here: A Review of "Behind Closed Doors" A Novel by Elizabeth Haynes, Served with Dark Chocolate Covered 'Crisps'

Kahakai Kitchen is hosting today's stop on the TLC Book Tour of Behind Closed Doors: A Novel by Elizabeth Hayes. I find Hayes' books to be dark, fascinating, and difficult to put down. And, speaking of difficult to put down, so are the salty and sweet Dark Chocolate Covered Potato Crisps that I am pairing with the book. 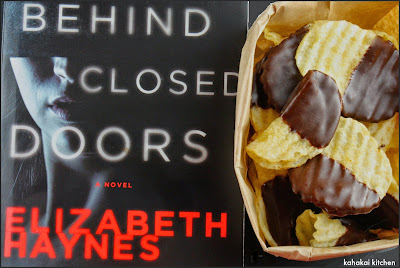 Ten years ago, 15-year-old Scarlett Rainsford vanished while on a family holiday in Greece. Was she abducted, or did she run away from her severely dysfunctional family? Lou Smith worked the case as a police constable, and failing to find Scarlett has been one of the biggest regrets of her career. No one is more shocked than Lou to learn that Scarlett has unexpectedly been found during a Special Branch raid of a brothel in Briarstone.

Lou and her Major Crime team are already stretched working two troubling cases: nineteen-year-old Ian Palmer was found badly beaten; and soon after, bar owner Carl McVey was found half-buried in the woods, his Rolex and money gone. While Lou tries to establish the links between the two cases, DS Sam Hollands works with Special Branch to question Scarlett. What happened to her? Where has she been until now? How did she end up back here? And why is her family—with the exception of her emotionally fragile older sister, Juliette—less than enthusiastic about her return?

When another brutal assault and homicide are linked to the McVey murder, Lou’s cases collide, and the clues all point in one terrifying direction. As the pressure and the danger mount, it becomes clear that the silent, secretive Scarlett holds they key to everything. 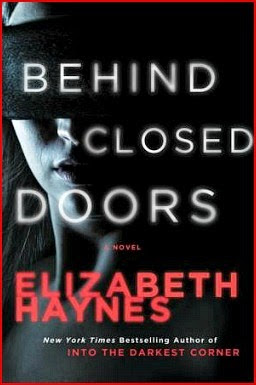 TLC Book Tours was my introduction to Elizabeth Haynes, who has quickly become one of my very favorite mystery/thriller authors. I hosted tour stops for two of her novels--Into the Darkest Corner and Human Remains, then last year I reviewed Under a Silent Moon, the first in her Briarstone crime series with Detective Inspector Louisa (Lou) Smith and her team. Haynes writes books that are intricately plotted; where seemingly separate cases and events are woven together into a larger, usually dark and disturbing picture and keep me guessing as I turn the pages. I was anxiously awaiting Behind Closed Doors and was hoping that it would live up to the high expectations that I hold for her books. It did not disappoint.

The most gripping part of the story is the Scarlett Rainsford case and the story goes back and forth between current time and ten years ago when a then fifteen-year-old Scarlett disappeared. It is told by the perspectives of the main character DI Lou Smith, Scarlett--both during the decade she was missing and present day, and Detective Sargent Sam Hollands, as well as through 'copies' of the various police reports on the cases. Scarlett is a compelling voice and her story had me alternating cringing, holding my breath, and occasionally wiping at tears. Her experience in captivity with sex traffickers is harrowing and gives the book its dark edge. Lou, already caught up in two big cases, has much guilt over failing to find Scarlett ten years ago. As well, she has mixed feelings about her relationship with Jason and struggles as he wants to get closer. I liked the relationship between Lou and Jason in the first book but found myself less absorbed with them and more interested in DS Sam Hollands. We got to know Sam in Under a Silent Moon and get to know her better in Behind Closed Doors. Her ability to get people to open up is one of her strengths as a DS, but it has ramifications when she finds herself becoming too involved with Scarlett and caring more than she should. I hope we have much more of Sam in future books.

I have strong feelings about starting a series with the first book, so if you have not read Under a Silent Moon, I would strongly recommend that you read it first. I suppose you could read Behind Closed Doors without it and still keep up--but it does set up the characters and some of the story points originated with the first book. Plus you should be reading all of Elizabeth Haynes books anyway. Her writing is excellent and her knowledge of the police and legal systems and criminal behavior make her books smart, absorbing, and put the reader at the center of the investigation. I am already looking forward to her next book.

Author Notes: Elizabeth Haynes is a police intelligence analyst, a civilian role that involves determining patterns in offending and criminal behavior. Dark Tide is her second novel; rights to her first, Into the Darkest Corner, have been sold in twenty-five territories. Haynes lives in England in a village near Maidstone, Kent, with her husband and son.

In the first Louisa Smith Book, Under a Silent Moon, Lou grabbed whatever she ate on-the-go and usually from the station vending machines so I partnered that book with Dark Mocha-Coconut No-Bake Bars to feed her coffee and chocolate addiction. Lou's eating habits have not improved from the last book. When she finally takes the time to eat, her meals seem to consist of takeout (Jason brings her a healthier chicken kebab dinner when she would have grabbed Indian, Chinese or pizza), a grocery store egg salad sandwich or a cheese baguette from the station's canteen, and of course whatever she can grab from the office vending machines--usually a pack of crisps and a candy bar. I decided to combine the crisps (potato chips to us Yanks) and chocolate theme and make one of my favorite guilty pleasures--chocolate covered potato chips. 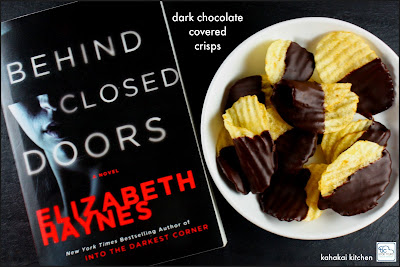 I first had chocolate covered potato chips many years ago from a candy store in Portland and was immediately a fan of the sweet and salty combination. I have had many variations since then and although I try not to keep chips in the house, occasionally I buy a small bag and dip my own when I get the craving. Much cheaper than most candy store prices. 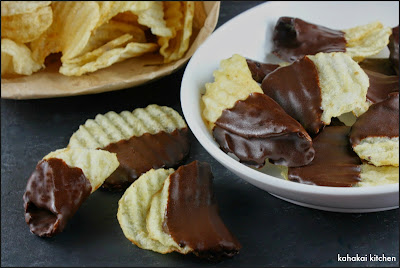 You can use any kind of chips--but the wavy/krinkle cut kind hold the chocolate best. Speaking of chocolate, the first chocolate-covered potato chips I had were dipped with  milk chocolate and the contrast between sweet and salty is excellent. Now I tend to prefer dark chocolate, but not so dark that it isn't sweet too. The one I used for these chips is a 65% dark chocolate and that seems to be the right mix for me. I usually just use chocolate and chips but I happened to see a Joy the Baker post where she mentioned that adding a touch of coconut oil helps the chocolate both loosen for dipping and set better on the chip. So this round, I gave it a try.

You can fully dip or half-dip your crisps, I prefer the half dip. I think it looks more interesting and gives you a chocolate free 'handle' to pop them in your mouth without mess. Good for when you have a good mystery thriller in one hand and don't want to put it down!

Dark Chocolate-Covered Potato Crisps
By Deb, Kahakai Kitchen with some inspiration from Joy the Baker
(Makes about 2 Dozen Chips)

Line a plate or flat container with parchment or waxed paper and set aside.

Chop chocolate into small pieces and place in bowl with coconut oil. Heat (microwave or double-boiler) and melted, stirring until smooth.

Dip chips into the melted chocolate, letting excess drip off. (I find that a spoon works really well to drip the chocolate over the chips. Place chips on the lined plate--arranged so the chocolate edges don't touch each other. Allow chocolate to set up for at least 15-20 minutes in the fridge. Enjoy!

If you don't eat them all at once, keep tightly covered in the fridge for 4-5 days. 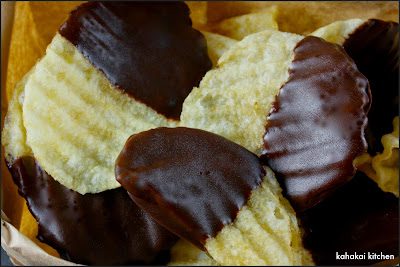 Notes/Results: What can I say?! It's chocolate and salty chips--it can't help but be good. Of course like any simple thing, the better quality of your ingredients, the better the results. Use good chocolate and good thick and crispy chips. Flat chips look the best when dipped but I have a preference for folded over chips for the extra chocolate they house in the fold. ;-) I don't know that I saw a big difference in texture from adding the coconut oil so next time, maybe I will play with adding more.

(*Chocolate notes: I like simply processed dark chocolate which can often melt more easily when it hits room temperature. Not a problem if you are storing your dipped chips in the fridge and pulling them out to eat, but if you want to gift your chocolate covered chips or have them out on a plate at room temp, you may want to invest in a chocolate with more cocoa butter--called couverture. Here's a great article from The Kitchn about the best chocolate for dipping.)

The hardest part about making this treat is curbing the desire to dip the chips into the chocolate and then right into your mouth. Indulge in one (OK, two--you can't eat just one), then have patience and let the rest firm up so you get the full experience. ;-) However, scraping the last of the chocolate from the bowl with extra or broken chips is totally allowed. 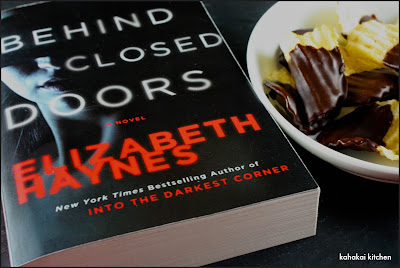 Note: A review copy of "Behind Closed Doors" was provided to me by the publisher and TLC Book Tours in return for a fair and honest review. I was not compensated for this review and as always my thoughts and opinions are my own.