I am unlikely ever to go on safari in Africa--too many shots needed, too many mosquitoes ready to suck all my blood, too much money to do it in a comfortable way (roughing it is not my style), but I have had a long fascination of animal life there--particularly the majestic elephants. On today's TLC Book Tour stop, I got to head to Africa without leaving the comforts of home via Ivory Ghosts: A Catherine Sohan Elephant Mystery by Caitlin O'Connell, an intense thriller full of poaching, murder and mayhem. My review is accompanied by a recipe inspired by the book, Chewy Peanut No-Bake Butter Muesli Bars--perfect for munching on safari or while curled up with a big cup of rooibos tea and a great book. You'll also find a giveaway at the bottom of the post, where you have a chance to win an eBook copy of Ivory Ghosts, plus an e-Giftcard for the eBook retailer of your choice. Happy Monday! ;-) 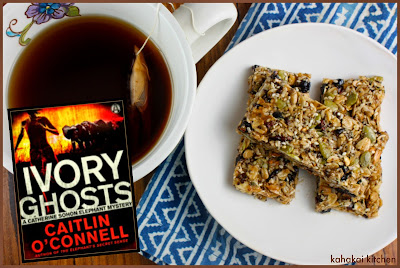 In a blockbuster debut thriller brimming with majestic wildlife, village politics, and international intrigue, a chilling quadruple homicide raises the stakes in the battle to save Africa’s elephants.

Still grieving over the tragic death of her fiancé, American wildlife biologist Catherine Sohon leaves South Africa and drives to a remote outpost in northeast Namibia, where she plans to face off against the shadowy forces of corruption and relentless human greed in the fight against elephant poaching. Undercover as a census pilot tracking the local elephant population, she’ll really be collecting evidence on the ruthless ivory traffickers.

But before she even reaches her destination, Catherine stumbles onto a scene of horrifying carnage: three people shot dead in their car, and a fourth nearby—with his brain removed. The slaughter appears to be the handiwork of a Zambian smuggler known as “the witchdoctor,” a figure reviled by activists and poachers alike. Forced to play nice with local officials, Catherine finds herself drawn to the prickly but charismatic Jon Baggs, head of the Ministry of Conservation, whose blustery exterior belies his deep investment in the poaching wars.

Torn between her developing feelings and her unofficial investigation, she takes to the air, only to be grounded by a vicious turf war between competing factions of a black-market operation that reaches far beyond the borders of Africa. With the mortality rate—both human and animal—skyrocketing, Catherine races to intercept a valuable shipment. Now she’s flying blind, and a cunning killer is on the move. 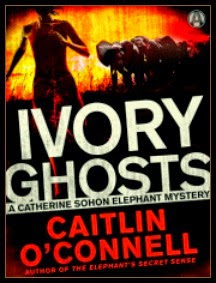 Ivory Ghosts is an intense page turner with a strong message--a great balance of mystery/thriller and an in-depth look at elephants, poaching, and the illegal ivory trade. I love it when a book not only sweeps me up in a fascinating story but teaches me something along the way. Author Caitlin O'Connell's background and knowledge of elephants and life in Africa make her words ring true and she writes in a way that is very accessible and engaging--nothing is too technical or detailed for non-scientific types or non-world politics experts to understand. Her vivid descriptions pulled me immediately into the book and made me feel like I was flying over Namibia counting elephants along with the lead character. Catherine Sohon is a great heroine--she is strong, independent, and brave enough to fight for the elephants and the people of Africa, but she is not perfect and she's normal enough to find being in the middle of a hyena hunt is terrifying along with being thrilling. (OK, maybe 'normal' would be to find it way more terrifying than thrilling!) ;-) The story had enough twists and turns to keep me guessing about who the 'bad guys' were. I changed my mind several times, which I liked as I enjoy being at least a bit surprised at the end of a mystery. Although there is some romance thrown in, the mystery is the heart of the story and it is a compelling one--your heart can't help but break for the elephants when reading about their senseless slaughter. Ivory Ghosts will appeal to mystery fans, animal lovers, those who like books with strong female leads, and anyone who enjoys a fast paced and well-written thriller. I am looking forward to more Catherine Sohon adventures. 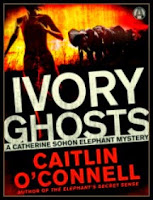 Author Notes: A world-renowned expert on elephants, Caitlin O’Connell holds a Ph.D. in ecology and is a faculty member at the Stanford University School of Medicine as well as director of life sciences for HNU Photonics. She is the author five nonfiction books about elephants, including the internationally acclaimed The Elephant’s Secret Sense, An Elephant’s Life, A Baby Elephant in the Wild, and Elephant Don, and co-author of the award-winning The Elephant Scientist. She is the co-founder and CEO of Utopia Scientific, a nonprofit organization dedicated to research and science education, and the co-founder of Triple Helix Productions, a global media forum with a mandate to develop more accurate and entertaining science content for the media. When not in the field with elephants, O’Connell divides her time between San Diego, California, and Maui, Hawaii, with her husband, Tim Rodwell, and their dog, Frodo. 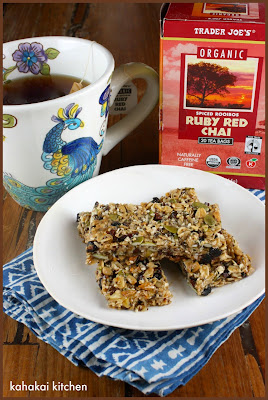 Surprisingly, there is a fair amount of food in the book. Catherine relies a lot on crackers with peanut butter and honey and muesli "rusks" (a kind of double-bake biscuit or cookie--much like a biscotti for dipping into tea or coffee). She brings along a tin full of tea in her gear (honey rooibos; from 'redbush'--a South African-grown herbal tea is a favorite), eats canned vegetable curry, and carries canned sardines or pilchards with her. Local fair includes koeksusters (a sticky deep-fried pastry), greasy fried chicken and Portuguese sausage rolls, mieliepap (porridge/polenta) and roasted mealie (corn on the cob). The local game lodge has "a nice lady's rump" on their lunch special (apparently a lady's rump is 8oz of meat instead of 12oz). Jon Baggs, Conservation Ministry Head and potential romantic lead, wants to quit and open a restaurant someday called The Sated Rabbit--the specialty being rabbit stuffed with quail. He cooks lamb rib with lemon rosemary and and leg of lamb rubbed with garlic, and brings a traumatized Catherine mushroom stroganoff and rice. I thought about making Rock Shandies--ginger ale or soda with lemon and bitters on top, but ultimately for my book-inspired recipe, I went back to the rusks that everyone kept grabbing for breakfast or snacks with their rooibos. 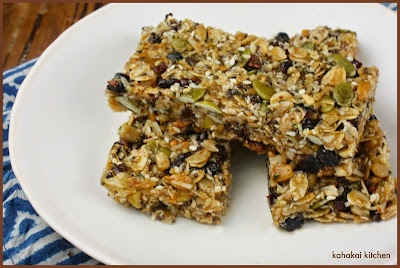 These bars are a very loose interpretation of a muesli rusks. Muesli being a mix of raw rolled oats and other ingredients like fresh or dried fruits, seeds and nuts that is usually mixed with milk and eaten for breakfast. I say very loose because rusks are hard, double-bakes and personally I am not a big fan of double-bakes, biscotti or their other forms. Given a choice between soft-chewy and hard-crunchy, I will take soft-chewy every time. Now rusks have a very practical use when you need to preserve bread and are traveling across the deserts sands or in the African bush doing an elephant census but, since I am safely at home, I decided to capture some of the flavors of a muesli rusk in a chewy granola bar form. I partnered the bars with one of my favorite rooibos teas; Trader Joe's Ruby Red Chai.

Line a small baking pan with parchment or waxed paper, leaving the sides long enough to cover the top of the pan. Set aside.

In a saucepan over medium heat, melt peanut butter, coconut oil, honey, salt, cinnamon and cardamom until smooth and bubbles start to form along the edges. Reduce heat.

Meanwhile, in a large pan (I used my wok), toast oats over low heat until lightly browned. Stir in the seeds, cacao nibs, coconut and dried fruit. Pour the liquid mixture into the oat mixture and stir to combine well. Cook mixture for 2-3 minutes over low heat to soften the ingredients, enabling them to stick together better. 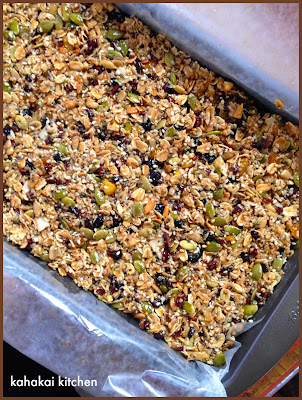 Pour the mixture into the prepared pan, pressing firmly with the back of a wooden spoon to ensure it is evenly spread.

Fold the parchment/wax paper over the granola so the top is covered. Press the granola very firmly, packing it as tightly as you can. Use your hands, a cup, or a can from the pantry to pack it in tightly and evenly.

Place in refrigerator and allow to cool completely for a few hours or overnight.

Remove granola block from pan and cut into bars. Wrap individually in waxed paper and store in the fridge for up to 2 weeks. 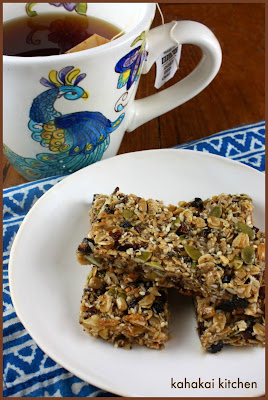 Notes/Results: Chewy, moist and good flavor, these are tasty little bars. They are nicely sweet from the dried fruit and honey and a little salty too. The flavor of the peanut butter is there, as well as hints of the cinnamon and cardamom so they paired really well with the Ruby Red Chai Tea. You could of course substitute another nut butter, or even sunflower seed butter if you want a nut free bar. If you want them stickier and less soft, you can omit the nut butter and add another 1/4 cup of honey instead. You can also change up the fruit and seeds to your liking or what you have on hand. Satisfying for a snack or breakfast and easy to make, I would make them again. 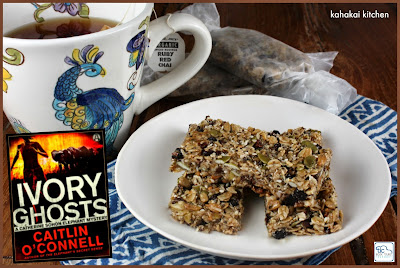 ***Giveaway***
This tour includes a Rafflecopter giveaway for a $25 eGift card to the eBook Retailer of the winner’s choice + an eBook copy of Ivory Ghosts.

a Rafflecopter giveaway
Note: A review copy of "Ivory Ghosts" was provided to me by the publisher and TLC Book Tours in return for a fair and honest review. I was not compensated for this review and as always my thoughts and opinions are my own.