Know that when I tell you that this Summery Cucumber and Dill Soup tastes a bit like dill pickles, I mean that in the best possible way. It's cool, creamy and slightly tangy but not overpowering. Perfect for a humid day. 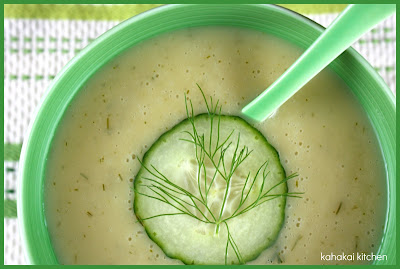 This one comes from The Compassionate Cook or "Please Don't Eat the Animals" --A Vegan Cookbook by PETA, but I did change things up quite a bit--noted in red below. 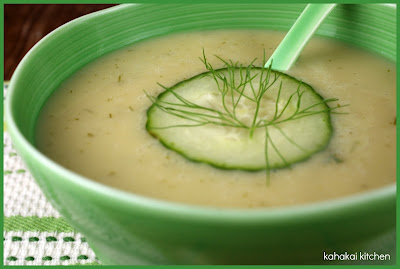 The Compassionate Cook says, "For those days when the mercury creeps up into the 90s and you're looking for a lighter meal."

In a large saucepan, heat oil over medium heat and saute the cucumbers, garlic and onions until onions are transparent, about 6 minutes. Add the broth and simmer until the cucumber is soft, about 15 to 20 minutes.

Remove the soup from the heat (scoop out cucumbers, onion and garlic and discard liquid), and transfer to a blender or food processor (add 1/2 of the dill) and blend until smooth. While the mixture is still warm, stir in the (remaining) dill and season with salt and pepper to taste. Chill. Stir in the soy (coconut) milk just before serving. 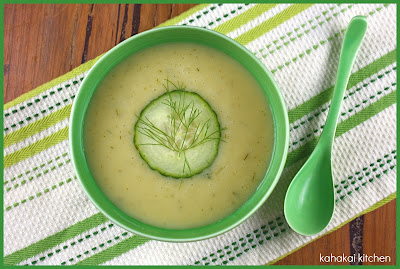 Notes/Results: I really liked the way this soup turned out--it's different and very refreshing and I am a big cucumber and dill fan. As noted above, I did reduce the garlic and onion so as not to overpower the cucumber. I also added part of the dill to the blender before blending to maximize the flavor. Coconut milk is what I had on hand, but any alternative milk will do. I would make this again.

Let's take a look into the Souper Sundays kitchen this week:

Carol of There's Always Thyme to Cook... brought a creamy Gazpacho and says, "It turns out the family is not so keen on cold soup. My husband thought it tasted like a creamy salad dressing. The kids and their friends gave it an "okay" but I really loved it. Loved. And it's easy enough to make some just for myself. The flavor was so good. I think my family just assumes that soup should be hot. I'm always in a rush when I serve so you'd think they'd be used to cold soup. Or maybe the fact that this was intentionally cold soup. They'd have been happier with the usual lukewarm. ah well, more for me." 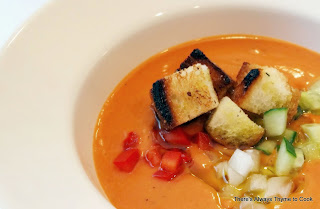 Help me welcome Becky from Veghotpot, a Brit making her first appearance at Souper Sundays this week with a Tomato Soup with Basil Gnocchi Dumplings. She says, "In this case I decided to combine a classic basil and tomato flavour, but with a twist – the basil is in the gnocchi!I adapted the original gnocchi recipe I made from Gino D’Acampo’s cookbook because it has been perfect everytime I’ve made it, but I have changed a few things in his method just to fit better with how I like to do things. The tomato soup is my own recipe and I actually much prefer it to my previous tomato soup offering." 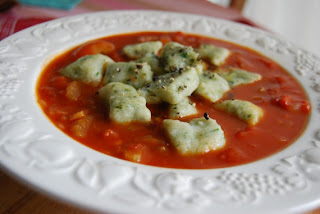 Johanna of Green Gourmet Giraffe Blog stopped back by with a Celery and Blue Cheese Soup. She says, "Today I have a celery and blue cheese soup to share with you.  It was good.  Very good.  But I don't have much to say about it, other than try it.  The blue cheese didn't overwhelm.  The amounts of celery and potato seemed flexible according to recipes I found on the web.  Even E was pleasantly surprised.  I ate mine with salad and E ate his with toast. " 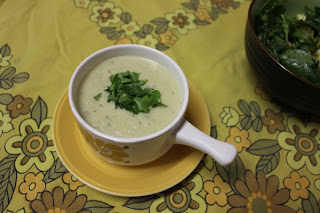 Simona of briciole has a Bean, Chicken and Egg Pasta Soup (Minestra di Fagioli, Pollo e Pasta All'uovo) to share and says, "There is no wrong that a good homemade chicken soup can't right. And even without a wrong to make right, a steaming bowl of chicken soup brings a smile to the steamed face.This soup has three elements--chicken stock/broth, the making of which gives you also some boiled chicken, beans and pasta all'uovo (egg pasta) cut into short tagliatelle. And the three elements can be made at different times and then brought together. Once they are available, putting together the soup requires a short amount of time." 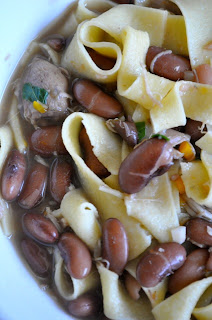 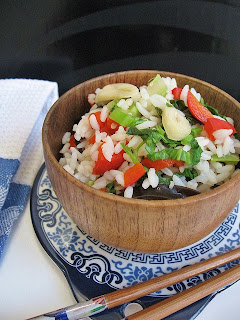 Janet of The Taste Space tried this Lemon Mediterranean Lentil Salad and says, "The glory of this salad comes from the simmering finale of the herbs and tomatoes with the cooked lentils. The olives, capers and lemon zest add a delicious mix of flavours that permeate the lentils in a great way. Except, because I had omitted the lemon juice and toasting, they kept cooking. They became mushy. Still uber delicious, but not as firm as I prefer for my lentil salads. Not as photogenic as I would like, but this recipe was too delicious not to share pronto." 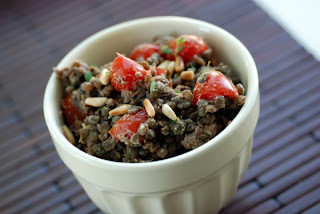 Pam of Sidewalk Shoes says, "Specialty cooking magazines lure me in every time.  My recent acquisition was Fine Cooking Grilling 2012 I flipped through the appetizer section (unfortunately, I rarely get my act together enough to prepare appetizers AND a meal), and ended up at salads.  I found the Grilled Chicken and Arugula Caesar Salad with Grilled Croutons. This was so good and easy!  It was perfect for a lazy Sunday afternoon, and even easy enough for a weeknight dinner. 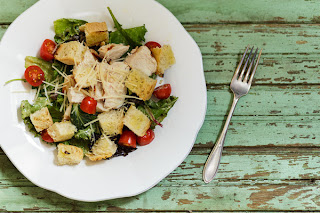 Finally, Debbie of Easy Natural Food made this wholesome grain salad and says, "...my only experience with millet has been fermenting and cooking it as a breakfast cereal. But I hopped online and did a quick search, and almost immediately came across this recipe for Warm Millet and Broccoli Salad by Eden Kitchen which sounds delicious. It was the pesto that sold me…..and the pesto did not disappoint…I’m still licking my lips." 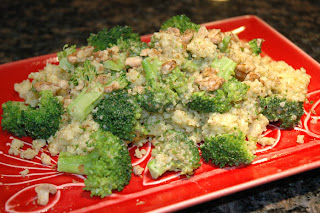 Great soups and salad this week--mahalo to everyone who joined in. If you have a soup, salad or sandwich that you would like to share, just click on the Souper Sundays logo on the sidebar for all of the details.