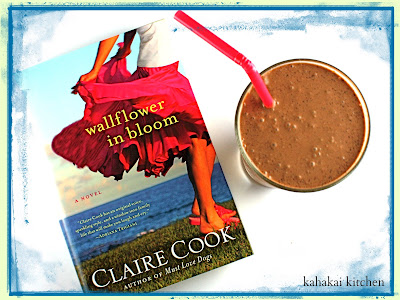 Deirdre Griffin feels trapped in her life. She works round-the-clock as the personal assistant and gatekeeper to her brother Tag, a beyond-famous motivational guru ("He's kind of a cross between a guru and a rock star. Think Deepak Chopra meets Bono.") Living in a converted sheep shed on the property of Tag's New England seaside compound and six months past the end of a 10-year dead-end relationship, her ex tells her he is getting married to his pregnant current girlfriend, Deirdre is out of shape, out of spirits and sick and tired of being the family wallflower. In the midst of a major meltdown and drunk off a blender pitcher of booze-filled milkshake, Deirdre uses her social media marketing and PR skills and Tag's massive online following to get herself voted on as a last-minute replacement on Dancing With the Stars. Is it finally time for the wallflower to bloom? 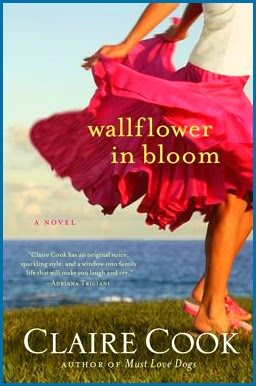 Wallflower in Bloom is the latest novel by Claire Cook (Must Love Dogs). It's a frothy, sweet and funny story--a perfect lighthearted summer read. In addition to the warm appealing Deirdre, there is a cast of quirky characters including her Deadhead parents, a cute potential love interest, Tag's two ex-wives who still live on his compound and bonded together to open a catering company called Afterwife, a couple of goldfish named Fred and Ginger. The Dancing with the Stars premise, (even if it does seem unlikely the unknown sister of a famous New Age Guru would actually get on as a celebrity contestant--although come to think of it, if Bristol Palin made it on...) is a fun one. There's a backstage look at what being a contestant looks like--costumes, spray tans and lots of blood, sweat and tears. This book is definitely chick lit, nothing at all substantial, but it made me chuckle and root for Deidre throughout. I was a little disappointed at the ending--I felt like it came to soon after all of the build up and I wanted more, but overall, it was an enjoyable read and a good one for the summer beach bag. 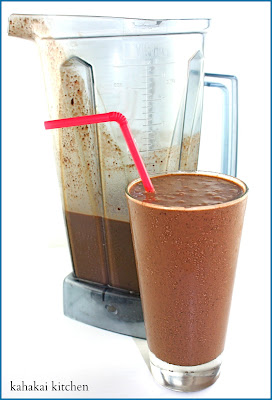 Since Deirdre is an emotional overeater there was plenty of food in this book to inspire. But, to best represent it, how could I not make a vegan version of the boozy milkshake that gave Deirdre the liquid courage to put herself out there?

From Wallflower in Bloom: "I opened my refrigerator to inspect the contents. I'd grabbed a few bottles of wine from Tag's wine fridge, and also a bottle of some fancy shmancy Russian vodka he kept in his freezer.I usually make it a point to stay away from the triple-digit-proof stuff, but it looked so cold and refreshing I'd snagged it anyway. I'd also taken some chocolate soy milk that Afterwife had started carrying. mostly because I liked the old-fashioned glass milk bottle it came in. I'd had a vague idea that after I drank the milk I'd use the bottle for a vase to to hold the flowers I was going to pick from one of my brother's gardens to make myself feel better.

...I dug out my blender and slammed it down on the counter. I shoveled in some big scoops of the Ben & Jerry's Triple Caramel Chunk ice cream I'd grabbed at Tag's, then buried it in chocolate soy milk. I opened the bottle of pretentious vodka and filled the blender right to the tippity top. I knew the proportions were off, but at the moment, I didn't really give a triple caramel shit. "Let the pity party begin." I said.

...I took a drink from my tall glass. It was like the world's most incredible milk shake. The vodka had completely disappeared into the rich, sweet chocolate-covered caramel of the ice cream. Boyohboy, Ben and Jerry sure knew their stuff. I wondered if one of them was single." 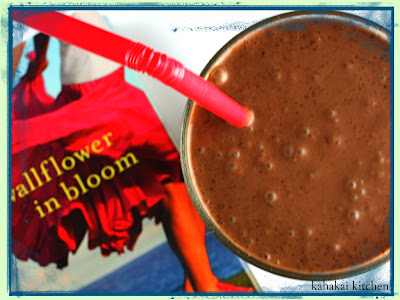 Deirdre's milkshake used chocolate soy milk, Ben & Jerry's Caramel Chunk and copious amounts of expensive Russian vodka. I went for a vegan version with what I had in the house--chocolate coconut milk, non-dairy ice cream and a more reasonable amount of Island 808 Vodka. Since my vegan ice cream was Purely Decadent Dairy Free Peanut Butter Zig Zag, I thought a scoop of creamy peanut butter would be a welcome addition... and I was so right. Creamy, chocolaty, decadent milkshake goodness. There's really no recipe--make it to your tastes and enjoy--maybe just not the entire blender like Deirdre! If you think vodka,a chocolate and peanut butter don't go together in a milkshake--you are sadly mistaken--it is delicious. Not health food, but a fun indulgence, much like Wallflower in Bloom.

Note: A review copy of Wallflower in Bloom was provided by the publisher. I was not compensated for this review and as always my thoughts and opinions are my own.