Curried Zucchini Cucumber Soup (Is it a Soup? Is it a Smoothie? ): Cool & Refreshing for Souper (Soup, Salad & Sammie) Sundays 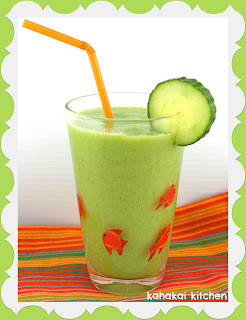 Is it a soup? Is it a smoothie? This Curried Zucchini Cucumber Soup is a little bit of each. It's from Ani's 15-Day Fat Blast by Ani Phyo. Ani Phyo is one of my favorite raw chefs and I have all her books so I had to pick up her latest book due mostly to the seventeen soup recipes it contained. Cooling, refreshing no-effort summer "cooking" makes me happy and is the way I like to eat when the temperature and humidity rises. Sure, you can just as easily serve this cold soup in a bowl but a glass and straw make for a fun change. 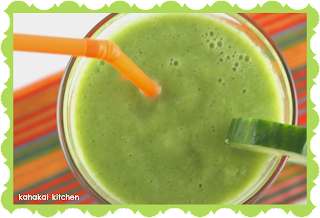 Ani says, "I like to think of blended soups as savory shakes. I love this soup because the zucchini blended with the miso gives it a creamy base, while the lemon add a touch of acidity and brightness."

Place all ingredients, including cayenne and garlic, if using, into your high-speed blender. Blend until smooth. Enjoy immediately.

Will keep for one day in fridge stored in sealed container.

Notes/Results: This soup should be called "I have been indulging way too much lately and really need something green in me soup." It is cooling, nourishing and tastes really good. There is just enough curry and a tiny kick from the cayenne to make this creamy soup pop with flavor. Pulling all of the veggies and the distilled water straight out of the fridge keeps it nice and cold and make it refreshing slurped down for a light lunch. If you are in a soup rut--this one is for you. ;-) I will happily make it again as well as try more of the soup and other recipes in the book. 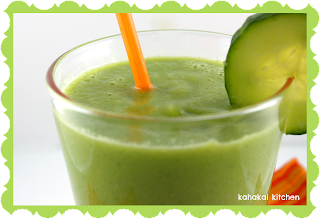 Let's see who joins us this week in the Souper Sundays kitchen:

Borscht with Beans is on the menu over at Green Gourmet Giraffe where Johanna says, "I made borscht years ago.  I liked it.  I wasn't in the mood to love it.  Recently I tried again, inspired by Lorraine's idea of blending most of the vegetables but keeping some aside until after blending.  I also liked Kari's idea of adding a can of beans to her barley soup.  I am pleased to say that I enjoyed it far more than my previous attempt." 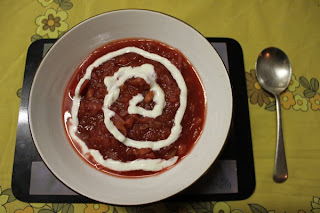 Foodycat has what she calls an "unphotogenic but delicious" Sopa de Ajo (Garlic Soup). She says, "This is not an attractive plate of food. It's nourishing, comforting, quick to make, economical and absolutely delicious. But it sure isn't pretty. For such simple ingredients, pretty bland in themselves, it has an extraordinary depth of flavour and packs a very comforting punch." 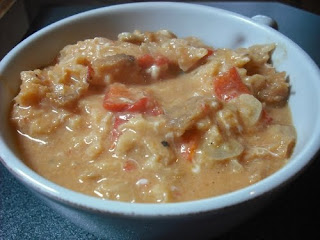 Tina of Squirrel Head Manor braved the heat for a bowl of this delectable Fish Chowder. She says, "It’s so brutally hot in Florida you wouldn’t think we would want a bowl of hot soup. Or stew. Most times that is true……….but no matter what the weather, I always come back to soup as a natural go-to lunch or starter. Awhile back we tried the Wahoo fish. This is such a meaty type fish that we ended up with leftovers. A stew seemed in order for the grilled chunks remaining and that’s just what we made." 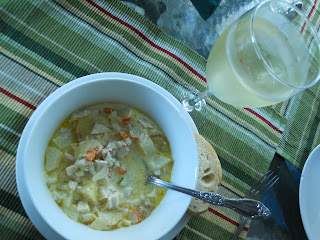 Janet of The Taste Space and I were channeling each other with raw green soups this week and she made a Raw Sea and Sprouts Soup or Salad (Sunflower Sprout, Apple and Dulse Soup) that can be enjoyed in a glass or left unblended to eat as a salad. Janet says, "Even though I drank it in a glass, this wasn’t a juice. It was a creamy pureed soup. The soup was only warmed by the blender, a welcome change during the recent heat wave and the biggest difference from traditional soups." 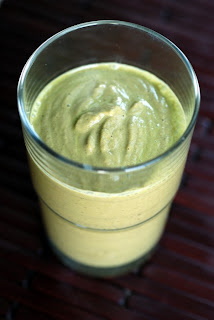 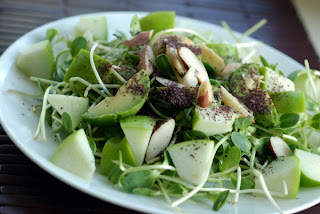 You definitely don't want to blend up Janet's second dish this week, this pretty Strawberry Avocado and Mint Salad with a Chocolate Balsamic Vinaigrette. She says, "... I tried yet another dressing. This time, though, I made less. This is a simple dressing to put together, so I can easily whip it up again. And I will because it was glorious. Roasted hazelnut oil. Balsamic Vinegar. Chocolate. Need I explain more?Oh wait, please, let me tell what I paired the decadent chocolate balsamic vinaigrette with: Strawberries. Avocado. Mint. Toasted Almonds. Raw Cacao Nibs…… oh, and lettuce, too." 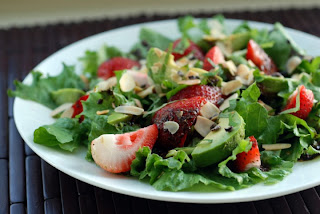 Carol from There's Always Thyme to Cook... re-posted a favorite salad this week and says, "My daughter had to bring in a recipe for her final grade in her High School cooking class this past year and didn't know what to make. She went through all the recipes on my blog and ended up making this recipe for Apple, Cherry and Walnut Salad with Maple Dressing and received an A+! It was one of the favorites of the class. And ours. She hasn't made a thing since but at least I know she can :)" 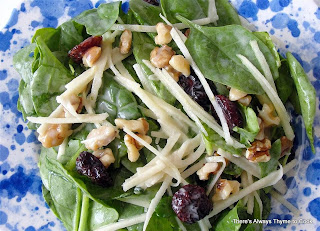 Debbie of Easy Natural Food tried something a bit different for her this week, this colorful Kohlrabi and Mango Salad. Debbie says, "I’ve been hearing a lot about kohlrabi lately. I’ve never bought kohlrabi, never eaten it (to the best of my knowledge), and have certainly never cooked with it before. But I’m always into trying new vegetables, and in fact sometimes I buy something that I have absolutely no idea how to cook on purpose, to force myself to try it! ... Mango, cilantro and lime are combined with the kohlrabi to make this tasty, refreshing side salad which is incredibly simple to throw together, but looks really cool!" 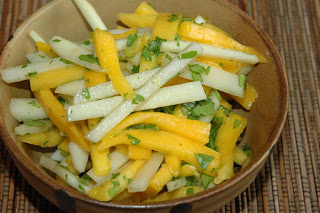 Joanne of Eats Well With Others has a salad and a soup and sandwich combo to share. First, this Corn-Avocado Salad with Black Beans and Barley. Joanne says, "...I'll be hitting the gym and eating totally normally except that whenever I get the strong and unnerving desire to stick a spoon into a jar of peanut butter and go to town...I'm gonna stick it into this bowl of salad instead. And given how each bite of this mix of corn, avocado, red bell peppers, tomatoes and black beans is just about bursting with flavor...I'd say that's not much of a sacrifice. Nope, not at all." 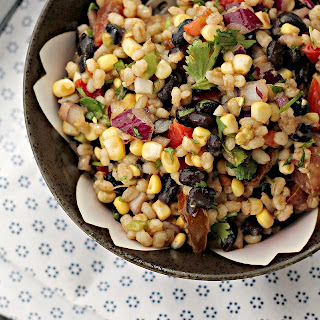 Joanne also joins in on the green soup party this week and says, "You might think I'm crazy for even so much as suggesting soup as a viable dinner option right now, but this Green Goddess Soup is worth the mere fifteen minutes of time it takes to make it! And it pairs perfect with this Pesto Mozzarella Grilled Cheese Sandwich." 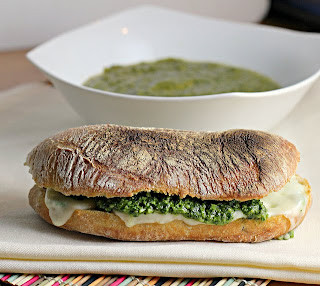 Some truly unique and wonderful dishes this week--thanks to everyone who joined in. If you have a soup, salad, sandwich or combination of any of the three that you would like to share, just click on the Souper Sunday logo on the sidebar for all of the details.