The Seared Rare Tuna Salad with Chayote Slaw from Everyday Mexican by Rick Bayless makes an easy and tasty summer dinner.  The recipe actually has a Guajillo Chile Dressing with it but Bayless mentions it also goes well with his Roasted Garlic Dressing with Green Chile, so that's the one I used. 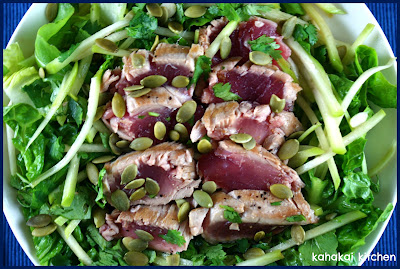 Rick Bayless says, "Okay, I know this sounds like something off of a fusion restaurant menu, but some fusion dishes lay the foundation for new classics. You'll love the wonderful play of robust flavors and textures--a quick way to feel as if you've gone out to that cool new restaurant." 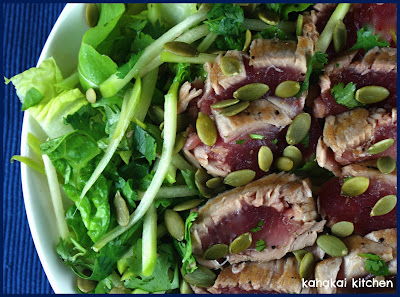 
Lightly brush skillet or grill pan with oil and heat on medium-high. Sprinkle both sides of the tuna with salt. Lay the tuna in the heated pan. When brown, no more than 1 minute, flip and sear the other side. (The higher the heat, the more golden the crust--without overcooking.) Remove the skillet from the heat. Thoroughly shake the dressing, then carefully drizzle on about 3 tablespoons dressing (it may spatter a bit when it hits the hot fan). Turn the tuna in the dressing from time to time as it cools.

Peel the chayotes, if you wish (the skin is so tender that peeling is optional). Cut them in half lengthwise; pry out the pits. Shred through the coarse holes od a large grater or with a mandoline (Finely shredded chayote looks sadly matted). Scoop into a bowl. Shake the dressing well, then toss the chayote with about 3 tablespoons dressing. Taste and season with salt.

Divide the greens among four plates, forming them into wide nests. Slice the pieces of tuna and nestle the pieces in the center of the greens. Top each plate with a portionof the chayote salad. Drizzle the tuna and greens with a little dressing. Sprinkle everything with cilantro (and some pepitas), and dinner is ready

Set a small dry skillet over medium heat. Lay in the unpeeled garlic cloves and the chiles. Roast, turning frequently, until soft and blotchy brown in spots, about 10 minutes for the chiles, 15 minutes for the garlic. Cool until able to handle, then slip the skins off the garlic and roughly chop the chiles (no need to remove the seeds).

Combine the garlic, chiles, oil, vinegar and a scant teaspoon of salt into a blender jar or food processor. Process until smooth. Taste and season highly with additional salt if necessary. Pour into a jar and secure the lid. Refrigerate until ready to use. Shake well immediately before pouring out. 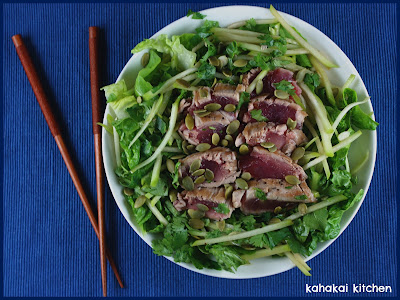 Notes/Results: I was really happy with the different flavors and textures of this salad. The dressing has a creamy feel and a good kick from the roasted serrano chiles. The chayotes are crisp and refreshing bt if you don't have them in your area you could substitute with jicama or even green apple. For a little crunch, I topped my salad with a sprinkle of pumpkin seeds--which I liked very much. My tuna slicing  won't win any awards--I was in a hurry and didn't pick the best knife but it definitely tastes much better than it looks! ;-) I would make both the salad and the dressing again.

It's Potluck week at I Heart Cooking Clubs and you can see what Rick Bayless dishes everyone chose this week by going to the post and clicking on the links.