I made this simple Turkish Lentil Soup twice yesterday. Once because I chose it from the Whole Foods website to make and sample at their Whole Planet Foundation event. And the second time because the little "taste for seasoning" bite that I managed to snag before the soup was demolished by happy samplers made me want more of it. As in my own bowl. Enjoyed with some toasted pita and some peace and quiet rather than extolling the quick cooking virtues of red lentils to the shopping masses. 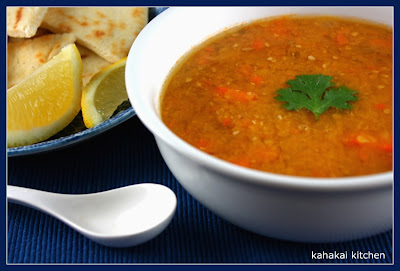 When I found myself craving more of this soup and not the veggie soup I was going to make, and finding myself sent home with some leftover red lentils and tomato paste from the demo, I changed plans and using some freezer garlic stock, I whipped up a half-batch for dinner.

You can find this recipe along with other global recipes inspired by Whole Planet microcredit clients at the Whole Foods website here. 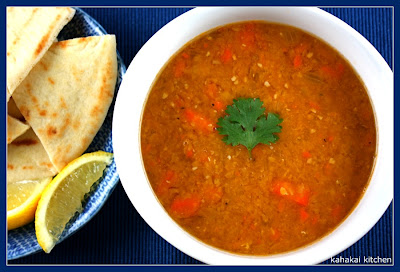 Whole Foods says, "This version of Turkey's classic lentil soup is home cooking at its best: Simple, flavorful and nutritious. Make it a complete meal by adding a tangy salad and your favorite flatbread or a crusty loaf of whole-grain bread. This recipe was inspired by Whole Planet Foundation microcredit clients."

In a large pot, combine lentils, broth, onion, carrot, garlic, tomato paste, cumin and cayenne and bring to a boil over high heat. Lower heat and simmer, uncovered, until vegetables and very tender and lentils begin to fall apart, about 25 minutes.

Remove the pot from the heat and use an immersion blender to quickly blend the soup until it is creamy but not completely puréed. Or, you can carefully blend about half the soup in a blender, but use caution when blending hot liquids: blend only in small batches, hold the lid down firmly with a kitchen towel, and begin blending on low speed. Add salt and serve with lemon wedges and a garnish of mint if desired. 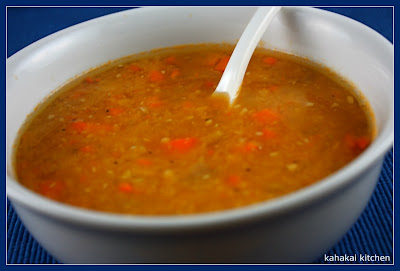 Notes/Results: Simple and full of flavor, this is a great soup for when you want something satisfying on the table fairly quickly as it can be prepared in about 30 minutes and just requires a bit of chopping up a carrot, onion and garlic and then tossing everything into the soup pot. I added extra carrot and cumin to the recipe--the cumin adds that smoky flavor that compliments the lentils so well. I served the soup without the lemon at the store demo and it was very good (the samples went, people came back for more, red lentils moved off the shelves and recipe copies were grabbed up--so a definite success), but I would recommend adding the optional lemon juice as it brightens up the flavor and gives the soup it's extra flavor "oomph." I partially blended the soup with the immersion blender but you can blend it all, or leave it unblended, depending on your preferences. I will make this again. 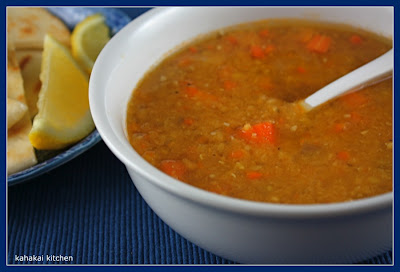 I'm going to link this delicious soup up with Sunday Night Soup Nights at Easy Natural Foods. Check out the Rosemary Lamb Stew by SNSN's host, Debbie, in the Souper Sundays roundup below. ;-)

Now let's check out the selection of soups and salads we have waiting in the Souper Sundays kitchen this week:

Janet of The Taste Space has a belly-warming Celeriac and Pumpkin Curry. She says, "Celeriac. Pumpkin. Could I be sharing any more autumn-like produce? As I am munching away through my freezer before our next move, I am rediscovering meals that I should have blogged about but for some reason, I haven’t! Typically, potatoes are used in Indian cooking but here, celeriac adds a different dimension which complements the sweetness from the pumpkin. I also loved the addition of the spinach thrown in for good green measure." 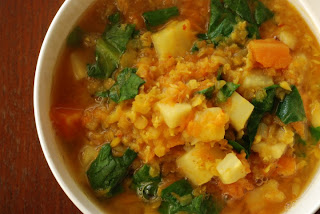 Tigerfish of Teczcape - An Escape to Food made Edamame, Tofu Soup with Leaf Mustard and says, "One of the best ways to use preserved/pickled leaf mustard which can be pretty intense, is to combine with another ingredient which is relatively bland - and create a perfectly balanced flavorful dish. Edamame (considered immature soybeans) and tofu (processed soybeans) both considered part of the legume family, will be suitable to complement the leaf mustard.This vegetarian dish can be served as soup (dunk in noodles if you wish to make a one-dish) or also as a side-dish best paired with rice or congee/porridge." 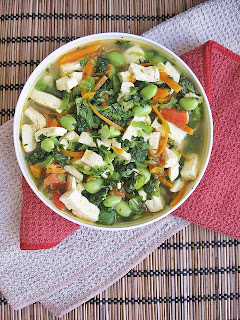 Corina of Searching for Spice has a pair of soups to share. First up, this Sugar Snap Pea and Asparagus Soup, about which she says, "I found this over at Always Eat on the Good China, who I was paired with for Taste and Create. I made a smaller quantity and simplified the method slightly but the only change in the ingredients was to use stock instead of water and yoghurt instead of sour cream to serve. I always have yoghurt in the fridge but wasn’t quite organised enough to get any sour cream. I loved the fresh end result. It tastes of exactly what it is – pea and asparagus, and is a lovely colour too!" 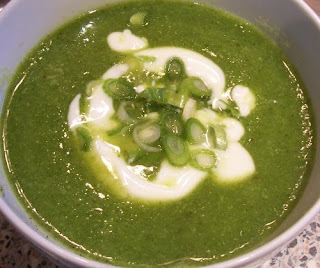 Corina's second soup is a hearty Finnish Salmon Soup. She says, "...the potato, parsnip and salmon soaked up the flavour of the all spice and were delicious. I don’t often use all spice but it was a flavour I could happily enjoy without needing other herbs or spices. So, it was definitely a success, and a recipe I wouldn’t hesitate to make again. Unlike some soups which are not filling enough for a whole meal, it makes a great one-pot meal, not needing any bread to go with it, although of course you could have some if you wanted." 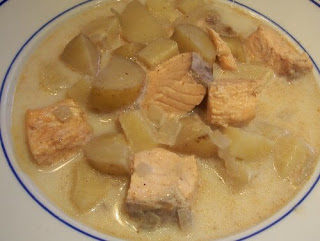 Please join me in welcoming Debbie of Easy Natural Food at Souper Sundays for the first time this week with an aromatic Rosemary Lamb Stew. Debbie says, "The rosemary part of this stew is inspired by the copious quantity of rosemary that is growing along the sunny side of our house. I have to prune it back several times a year, but lately I’ve been taking sprigs of the tender new growths and tossing them in stews. This stew is so tasty, and I was surprised how much of a sweetness the root vegetables gave it." (BTW: Debbie has a seasonal weekly soup event for soups made with homemade stocks and broths called Sunday Night Soup Night. If you have a soup that fits, check out her weekly post and linky.) Welcome Debbie! 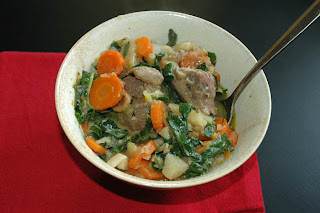 Heather of girlichef has a savory Cabbage and White Bean Soup to share and says, "While I do usually prefer brothy soups, the occasional thick...or thicker than brothy...ones add variety. So I don't dismiss them. Especially when they're beautifully beany. This one in particular is thickened with both white beans and potatoes that are cooked until extremely tender and falling apart and then mashed to add body to the broth. It becomes creamy and luscious which I think makes the perfect backdrop for the bold flavors of cabbage, rosemary, Italian sausage, Parmesan, and balsamic vinegar that actually work together in harmony rather than compete as it seems they should." 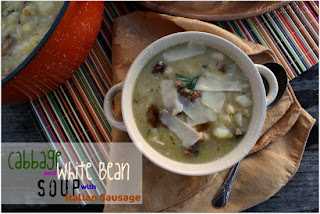 And one salad this week, Chelsea's Citrus & Spice Seared Salmon Salad from Jill of SaucyCooks.com from a recipe from her daughter. Jill says, "The bold taste of the super green, antioxidant, calcium and fiber rich baby spinach leaves, the Vitamin C laden broccoli and the succulent and tender asparagus which is now being heralded as an anti-inflammatory food because it provides a truly unique combination of anti-inflammatory nutrients, are not only an incredibly healthful combo, but this salad bed tastes like the first days of Spring that we are enjoying here in Colorado now. The wild salmon is considered to be healthful due to the fish’s high protein, high omega-3 fatty acids, and high vitamin D content and it’s beautiful orange pink color looks spectacular on a bed of bright greens." 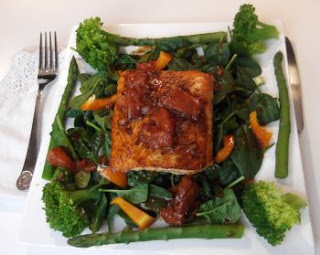 Wonderful dishes this week--thanks to everyone who joined in. If you have a soup, salad, or sandwich that you would like to share, just click on the Souper Sunday logo for all of the details.
Have a happy, healthy week!